Comments (0)
Add to wishlistDelete from wishlist
Cite this document
Summary
The maintenance of water supplies as a sustainable resource in the Gulf States in general and in the United Arab Emirates (UAE) in particular is an essential facet of the future survival of those countries. The UAE does not enjoy any natural supplies of water, and so must…
Download full paperFile format: .doc, available for editing
HIDE THIS PAPERGRAB THE BEST PAPER97.7% of users find it useful 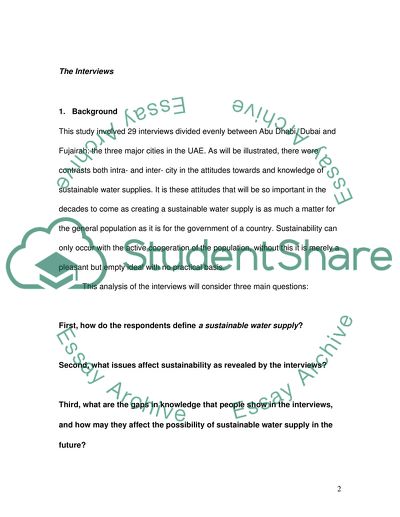 Download file to see previous pages Thus keeping a sustainable water supply in place is essential for the future of the country.
Interviews have a number of strengths and weaknesses associated with them. Among the strengths are the ability to gauge both the knowledge and attitudes of the respondents, and also how the two influence one another. The weakness is that these are purely qualitative in nature, and so cannot produce quantitative, empirical evidence as to the state of the water supply and sustainability in the UAE.
This study involved 29 interviews divided evenly between Abu Dhabi, Dubai and Fujairah: the three major cities in the UAE. As will be illustrated, there were contrasts both intra- and inter- city in the attitudes towards and knowledge of sustainable water supplies. It is these attitudes that will be so important in the decades to come as creating a sustainable water supply is as much a matter for the general population as it is for the government of a country. Sustainability can only occur with the active cooperation of the population, without this it is merely a pleasant but empty ideal with no practical basis.
It is interesting to note the variety of responses to both the definition of “sustainability” and how the respondents expanded on “what is important with regards to sustainability?” The definitions range from the simple to the complex to the comprehensive. Thus AUH1 states simply,
“Sustainability for water means you use only the renewable resources that you cannot affect or deteriorate your water resources which is not here applicable in Abu Dhabi Emirate because the demand is more than water production and we rely on ground water which is not renewable.”
Apart from the difference in style of reply, it is obvious that AUH1 places the definition of sustainability clearly (and solely) within the human context of whether “everyone” has a secure and safe ...Download file to see next pagesRead More
Share:
Tags
Cite this document
(“The Impact of Privatisation on Sustainability of Water in the United Essay”, n.d.)
Retrieved de https://studentshare.org/miscellaneous/1537066-the-impact-of-privatisation-on-sustainability-of-water-in-the-united-arab-emirates

(The Impact of Privatisation on Sustainability of Water in the United Essay)
https://studentshare.org/miscellaneous/1537066-the-impact-of-privatisation-on-sustainability-of-water-in-the-united-arab-emirates.

“The Impact of Privatisation on Sustainability of Water in the United Essay”, n.d. https://studentshare.org/miscellaneous/1537066-the-impact-of-privatisation-on-sustainability-of-water-in-the-united-arab-emirates.
Comments (0)
Click to create a comment or rate a document

Chapter 5: Conclusions: This chapter will detail the conclusions of the research and will also include the recommendations by the researcher. The limitations of this research will also be included and further research recommendations for the same will also be included.
Human resource managers have a major impact on organizations and they hold a very responsible position. The duties of the HR managers are to ensure that the organization employs the right set of employees and there is also a good mix of skills within the organization. It is also to ensure that all the activities and processes relating to the employees are handled and completed in sync with the culture, values, and mission of the company.
The main reason to...
8 Pages(2000 words)Assignment
sponsored ads
Save Your Time for More Important Things
Let us write or edit the essay on your topic "The Impact of Privatisation on Sustainability of Water in the United Arab Emirates" with a personal 20% discount.
GRAB THE BEST PAPER

Let us find you another Essay on topic The Impact of Privatisation on Sustainability of Water in the United Arab Emirates for FREE!