Comments (0)
Add to wishlistDelete from wishlist
Cite this document
Summary
This is achieved only if the judge is totally convinced that the marriage will not work even if it is given a second chance (Awadhi,…
Download full paperFile format: .doc, available for editing
HIDE THIS PAPERGRAB THE BEST PAPER92.2% of users find it useful 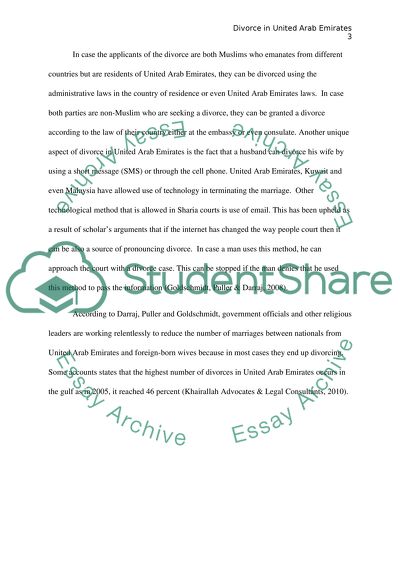 Divorce in United Arab Emirates Although divorce is allowed in Islam, Sharia laws make the process be more difficult for couples having wrangles to end their relationship. This is achieved only if the judge is totally convinced that the marriage will not work even if it is given a second chance (Awadhi, 2007).
Sharia courts in United Arab Emirates accept any divorce appeal from men of any nationality. Women who are non-Muslims and married by Muslim men can also apply for a divorce at Sharia courts. The divorce follows a certain process which starts with registering the case at Moral and Family Guidance Section of the court. Later, the councillor meets both parties to discuss their standoff (Sawma, 2012). After consultation with the councillor, they are given three-month time for them to go and try and solve their difference before they can begin the process of divorce. In case the couple insist on divorce, the divorce papers are forwarded to the court. This provides a good opportunity for the judge to study the case an aspect that is followed by the judges discussing the case and listening to all witnesses. Depending with the depth of the cases, it might take some few sessions before the judge can come into the conclusion of the case. Both parties are expected to attend all court proceedings (Momsen, 2009).
In United Arab Emirates, a woman can be granted a divorce if she proves that she is physically hurt or tortured by her husband. In addition, she can sue her husband for divorce if she is abandoned by him for a period of not less than three months i.e. if he has not been providing for her and the children. Also, the law allows a woman to get a khula if she returns back the entire dowry to the husband (Goldschmidt, Puller & Darraj, 2008).
In case the applicants of the divorce are both Muslims who emanates from different countries but are residents of United Arab Emirates, they can be divorced using the administrative laws in the country of residence or even United Arab Emirates laws. In case both parties are non-Muslim who are seeking a divorce, they can be granted a divorce according to the law of their country either at the embassy or even consulate. Another unique aspect of divorce in United Arab Emirates is the fact that a husband can divorce his wife by using a short message (SMS) or through the cell phone. United Arab Emirates, Kuwait and even Malaysia have allowed use of technology in terminating the marriage. Other technological method that is allowed in Sharia courts is use of email. This has been upheld as a result of scholar’s arguments that if the internet has changed the way people court then it can be also a source of pronouncing divorce. In case a man uses this method, he can approach the court with a divorce case. This can be stopped if the man denies that he used this method to pass the information (Goldschmidt, Puller & Darraj, 2008).
According to Darraj, Puller and Goldschmidt, government officials and other religious leaders are working relentlessly to reduce the number of marriages between nationals from United Arab Emirates and foreign-born wives because in most cases they end up divorcing. Some accounts states that the highest number of divorces in United Arab Emirates occurs in the gulf as in 2005, it reached 46 percent (Khairallah Advocates & Legal Consultants, 2010).
References
Awadhi, N. A. (2007, October 1). Divorce and its impact on the UAE society. Gulf News,
Goldschmidt, A., Puller,, M., & Darraj, S. M. (2008). United Arab Emirates. Infobase Publishing.
Khairallah Advocates & Legal Consultants (2010, November 10). Family Law in the UAE. Retrieved July 24, 2012, from http://http://www.khairallahlegal.com/_blog/Blog/post/Family_Law_in_the_UAE/
Maddy-Weitzman, B. (1999). Middle East Contemporary Survey, Volume 21. The Moshe Dayan Center.
Momsen, J. H. (2009). Gender and Development. Taylor & Francis.
Sawma, G. (2012, March 13). The Law of Marriage and Divorce in the United Arab Emirates. International Law. Retrieved July 24, 2012, from http://http://gabrielsawma.blogspot.com/2012/03/uae-islamic-divorce-in-united-states.html Read More
Share:
Tags
Cite this document
(“Divorce in united arab emirates Essay Example | Topics and Well Written Essays - 500 words”, n.d.)
Divorce in united arab emirates Essay Example | Topics and Well Written Essays - 500 words. Retrieved from https://studentshare.org/miscellaneous/1600760-divorce-in-united-arab-emirates

CHECK THESE SAMPLES OF Divorce in united arab emirates

The justice in United Arab Emirates

...?The justice in United Arab Emirates Introduction The structure and the rules of a country’s legal system can highly affect the country’s performancein regard to all its sectors, including its positioning as a member of the international community. In any case, the legal framework of each country needs necessarily to be aligned with the rules of international law. Still, potentials exist for differentiation of national law from the international legal rules, especially in the case of national security or other similar condition. Moreover, the culture and the ethics of certain countries have increased power in influencing the content and the scope of national legal system. This phenomenon...
18 Pages(4500 words)Research Paper

United Arab Emirates Law and How It Bacame United

...? United Arab Emirates Law and how it became united The United Arab Emirates, normally shortened just as theEmirates and abbreviated as the UAE, is located in the southeast area of Arabian Peninsula on the Persian Gulf’s Western Asia. The United Arab Emirates borders Oman to the east while to the south, it borders Saudi Arabia. At the same time, the UAE shares common borders with Qatar to the west and Iran to the north. The UAE is composed of seven Emirates that are equivalent to principalities. Though each emirate is governed by a hereditary emir, the seven emirates are governed by a single national president. The seven emirates are; Abu Dhabi, Dubai, Sharjah, Ajman, Fujairah, Umm al-Quwain and Ras al-Khaimah. Abu Dhabi serves... as the...
7 Pages(1750 words)Essay

Olay in the United Arab Emirates

...? Marketing Report Olay in the United Arab Emirates Insert Insert Grade Insert 25 May Introduction Olay is an American company that manufactures skin care products. Procter & Gamble owns the firm. It was founded in South Africa by Graham Wuff in 1999 who sold lanolin branded as oil of Olay (Olay, 2012). Wulf developed the oil of Olay at home and used his wife and friends to experiment on the oil. He marketed the oil of Olay product with his friend Lowe without any branding, successfully and later marketed the oil of Olay under the company Adams National Industries (ANI) (Olay, 2012). They successfully entered the international markets but later sold their company to Richard Merell Inc who...
5 Pages(1250 words)Essay

Lifebuoy in the United Arab Emirates

...a campaign for Global Hand washing Day which aimed was to educate students of proper hand washing in different parts of the glove including the United Arab Emirates. Around 100,000 students took part in educational activities with emphasis of hand washing with soap and provided information of the goodness of hand washing. This type of marketing strategy also increases the awareness of the students of the brand and the importance of hand washing. It educates young minds to a proper personal hand washing and to also to introduce the brands to them. Another activities of Lifebuoy is by sponsoring a team in sports division Market research plays an important factor in determining whether the...
5 Pages(1250 words)Essay

...﻿Environmental accounting in United Arab Emirates Introduction Environmental accounting is part of non financial disclosure aligned to best practice in corporate governance. This practice involves recognition and disclosure of corporate environmental cost and liabilities in financial and annual reports. Business entities have a social responsibility to protect the environment which may not necessarily translate to legislative requirements but earn the corporation good reputation among in the community (Farouk, Cherian &Jacob 2012, p.1-8). This is of significance especially when the company intends to attract new investors and retain shareholders through confirming confidence in its...
8 Pages(2000 words)Assignment

...United Arab Emirates Introduction The United Arab Emirates is a federation of seven sheikhdoms each known as an Emirate, the seven Emirates are; Abu Dhabi( Abu Zaby), Dubai( Dubayy), Sharijah(Ash Sharijah), Umm al Qaywayn, Ajman, Al Fajayrah, and Ras al Khaymah. The official census in 2005 estimated population of the federation to be 4, 467, 899 million, and according to the Oxford Business Group report (14) the country occupies an area of about 77,700 square kilometers, located on the south east Arabia in between the Persian Gulf and the Gulf of Oman. The principal and the most prosperous of all of the...
8 Pages(2000 words)Essay

...﻿DHL in United Arab Emirates a. History DHL’s history in UAE dates back to 1977 when the mother company began shifting from pure delivery of documents to small parcels. In UAE, logistics services were essential given the presence of oil exports and the region’s geographic interface with Asia and Europe. In this regard DHL has continued to develop huge logistics impact in the region since then. The choice for Dubai as a logistics hub by DHL was also as a result of areas world’s largest habors, large free-trade zone, and the presence of freight airport. As a rule, international companies have to partner with local companies to offer their services in UAE and Postal service of Dubai was the...
4 Pages(1000 words)Essay

...United Arab Emirates The United Arab Emirates is made up of 7 small emirates ly Fujairah, Umm AL-qaiwain, Ras Al-khaimah, Dubai, Abu Dhabi, Sharjah and Ajman. The seven were united as a federal state in December 1971. Before the oil economy was established in the 1960s, two orientations were responsible for shaping up the Emeriati culture. The activities were; the sea based culture that mainly involved sea trading and pearling and the nomadic based Bedouins mixed with oasis farming. The subcultures were socially, economically and politically interdependent and this created a common social identity and...
12 Pages(3000 words)Essay

...﻿ Final Research Paper - UAE Economy 1. Introduction The historical existence of ‘United Arab Emirates (UAE)’ was identified during the period of 1968 as a result of collaboration between ‘Sheikh Zayed bin Sultan Al Nahyan’ and ‘Sheikh Rashid bin Saeed Al Maktoum’. The prime reason for this truce was to safeguard the potential oil–rich reserves of this nation from the dominative intentions of the neighboring global powers such as the US among others. The historical evidence of UAE also projects itself as an open kind of economy, where major emphasis is provided towards welcoming foreign trade practices. In simple words, UAE projects itself as a paradise for carrying out international...
20 Pages(5000 words)Research Paper
sponsored ads
Save Your Time for More Important Things
Let us write or edit the essay on your topic "Divorce in united arab emirates" with a personal 20% discount.
GRAB THE BEST PAPER

Let us find you another Essay on topic Divorce in united arab emirates for FREE!