Comments (0)
Add to wishlistDelete from wishlist
Cite this document
Summary
The long and arduous process of solidifying accession into the WTO was intense and many of the end results were surprising and particularly unexpected.
The automobile industry in…
Download full paperFile format: .doc, available for editing
HIDE THIS PAPERGRAB THE BEST PAPER96.2% of users find it useful 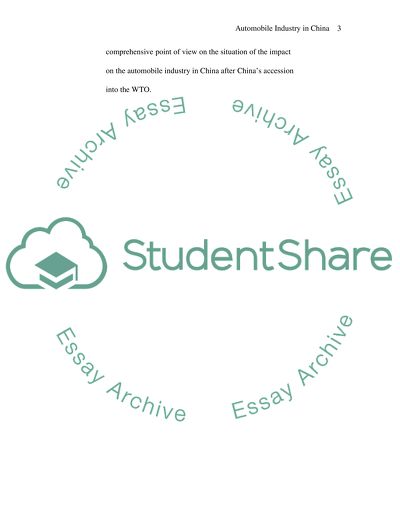 Download file to see previous pages In the end, the entry of China into the WTO was considered a positive thing by most, although there are certainly those with contradictory opinions. The efficacious qualities that China gained by entry into the WTO; an aid to the economy, and the opening up of China’s markets for more international trade and investment (to name a few).
The aim of this paper is to discuss more thoroughly on these points and more, and to offer a more in-depth and comprehensive point of view on the situation of the impact on the automobile industry in China after China’s accession into the WTO.
“Since the beginning of economic reform and its opening to the outside world, China’s economy has been growing at a rate of nearly 10 percent annually and its external trade has expanded by more than 15 percent a year. In 1999 China’s trade volume reached $360.7 billion, ranking 9th in the world, with export volume reaching $195 billion. China has emerged to become an important player in world trading system.” (Zhai & Li, 2000).
Negotiations over China’s accession into the WTO immediately provoked a debate between “…pessimists who believed that opening the economy would lead to a flood of imports and a de-nationalization of manufacturing industry, and those who believed that it would spur rationalization of state-owned enterprises, lock in domestic reforms, attract foreign investment, and open the way for trade expansion.” (Noble et al).
The aim of this paper is to thoroughly realize and discuss these interests and more, in order to come to a clearer and more understanding point of view on the particular situation. In order to do this, the following questions must be addressed:
The WTO (World Trade Organization) is an organization which consists of 123 signatory countries. Established on January 1, 1995, and based in Geneva, the WTO replaced the GATT (General Agreement on Tariffs and Trade) as the most primary legal and institutional foundation among the ...Download file to see next pagesRead More
Share:
Tags
Cite this document
(“The Impact on the Automobile Industry in China after Joining the WTO Essay”, n.d.)
The Impact on the Automobile Industry in China after Joining the WTO Essay. Retrieved from https://studentshare.org/miscellaneous/1535892-the-impact-on-the-automobile-industry-in-china-after-joining-the-wto

“The Impact on the Automobile Industry in China After Joining the WTO Essay”, n.d. https://studentshare.org/miscellaneous/1535892-the-impact-on-the-automobile-industry-in-china-after-joining-the-wto.
Comments (0)
Click to create a comment or rate a document

In 2001 alone, the US reported earning from the industry close to two hundred billion US dollars. According to a previous study, the middle east tops the list as the largest exporters of crude oil taking over sixty-six percent of the global production of oil. Europe is the least producers of oil taking only two percent of the market share (Green, 4).
According to the American Association of Petroleum Geologists, the major problem facing the industry is lack of workforce and the increase in demand for oil. The report indicated that by 2030, the world’s oil demand is expected to increase from one hundred and three to one hundred and thirty million barrels per day. Natural gas, on the other hand, will expectedly increase t...
7 Pages(1750 words)Coursework
sponsored ads
Save Your Time for More Important Things
Let us write or edit the essay on your topic "The Impact on the Automobile Industry in China after Joining the WTO" with a personal 20% discount.
GRAB THE BEST PAPER

Let us find you another Essay on topic The Impact on the Automobile Industry in China after Joining the WTO for FREE!