Comments (0)
Add to wishlistDelete from wishlist
Cite this document
Summary
A space was created where the atmosphere would be warm, comfortable and quiet. I asked the couple to meet me at a friend's counseling office after hours. The two chairs the couple would sit in were placed facing each other, knees positioned close together…
Download full paperFile format: .doc, available for editing
HIDE THIS PAPERGRAB THE BEST PAPER93.1% of users find it useful 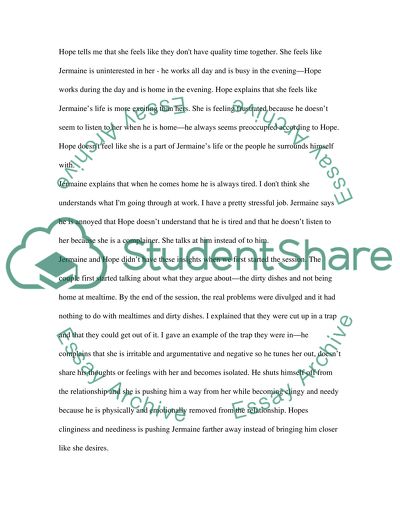 Download file to see previous pages I explained at no time during the session would there be shaming, blaming, criticism or judgment. The goal of the session was to test listening and dialogue skills (Hendrix, 2008).
Hope and Jermaine Bailey wanted to discuss their increasing feelings of isolation in their marriage. There children were grown and had left their house. The quiet of their home had become deafening for both of them and Jermaine was spending less and less time at home with Hope. The tradition of family dinners ended when the children left. Both Hope and Jermaine find themselves freer than ever before. They feel like they have let their relationship grow stale.
Hope tells me that she feels like they don't have quality time together. She feels like Jermaine is uninterested in her - he works all day and is busy in the evening-Hope works during the day and is home in the evening. Hope explains that she feels like Jermaine's life is more exciting than hers. She is feeling frustrated because he doesn't seem to listen to her when he is home-he always seems preoccupied according to Hope. Hope doesn't feel like she is a part of Jermaine's life or the people he surrounds himself with.
Jermaine explains that when he comes home he is always tired. I don't think she understands what I'm going through at work. I have a pretty stressful job. Jermaine says he is annoyed that Hope doesn't understand that he is tired and that he doesn't listen to her because she is a complainer. She talks at him instead of to him.
Jermaine and Hope didn't have these insights when we first started the session. The couple first started talking about what they argue about-the dirty dishes and not being home at mealtime. By the end of the session, the real problems were divulged and it had nothing to do with mealtimes and dirty dishes. I explained that they were cut up in a trap and that they could get out of it. I gave an example of the trap they were in-he complains that she is irritable and argumentative and negative so he tunes her out, doesn't share his thoughts or feelings with her and becomes isolated. He shuts himself off from the relationship and she is pushing him a way from her while becoming clingy and needy because he is physically and emotionally removed from the relationship. Hopes clinginess and neediness is pushing Jermaine farther away instead of bringing him closer like she desires.
By the end of the session Hope explained to Jermaine that she feels if she gives him more space they won't have a relationship. Jermaine explains to Hope that he worries that she loves him, but isn't in love with him any more. Both explain that they are feeling pressured in the marriage. Neither really feels that home is a safe haven anymore.
Session #2:
Date of session: October 6, 2008
Time of Session: 7PM
Location of session:
We returned to the same space used for the first session. The room was set up in the same way. The first few minutes of the session was used to calm the couple down through breathing exercises. I explained at no time during the session would there be shaming, blaming, criticism or judgment. The goal of the session was to recapture their feelings of isolation and to find ways to use dialogue more effectively (Hendrix, 2008).
Background information:
Hope and Jermaine began to see their patterns of behavior and ...Download file to see next pagesRead More
Share:
Tags
Cite this document
(“Practicum Counseling Report Case Study Example | Topics and Well Written Essays - 2500 words”, n.d.)
Practicum Counseling Report Case Study Example | Topics and Well Written Essays - 2500 words. Retrieved from https://studentshare.org/miscellaneous/1533445-practicum-counseling-report

Performing well academically and having a social life

A Review on The Keita L'Heritage Du Griot

Should breastfeeding moms show nipples to the public

Continuity and Change of Scribal Education

Analysis of the Diabetic Ketoacidosis Cases

...Methodological approach Introduction: A research is a continuous human effort to invent or discover something new on any aspect related to the area of study. A research involves application of the knowledge of the researcher on the topic under study. Research may be related to any discipline. The time frame of the research may vary according to the topic, scope and requirement of the research. Research can be basically classified into two namely- qualitative and quantitative. (Tesch). A qualitative research is one in which the researcher analyses the pattern of behavior or other human and behavioral aspects. “Qualitative research allows you to explore perceptions, attitudes and motivations and to understand how they are formed... approach...
9 Pages(2250 words)Report

7 Pages(1750 words)Essay
sponsored ads
Save Your Time for More Important Things
Let us write or edit the case study on your topic "Practicum Counseling Report" with a personal 20% discount.
GRAB THE BEST PAPER

Let us find you another Case Study on topic Practicum Counseling Report for FREE!