Comments (0)
Add to wishlistDelete from wishlist
Cite this document
Summary
A study by Jonsson and Halabai (2006) titled "Work Related Post-Traumatic Stress as Described by Jordanian Emergency Nurses" was conducted to find the cause of post-traumatic stress syndrome (PTSD) in a representative group of Jordanian nurses. According to Jonsson and Halabai (2006) the research "was undertaken using hermeneutic phenomenology" (p.89)…
Download full paperFile format: .doc, available for editing
HIDE THIS PAPERGRAB THE BEST PAPER98.8% of users find it useful 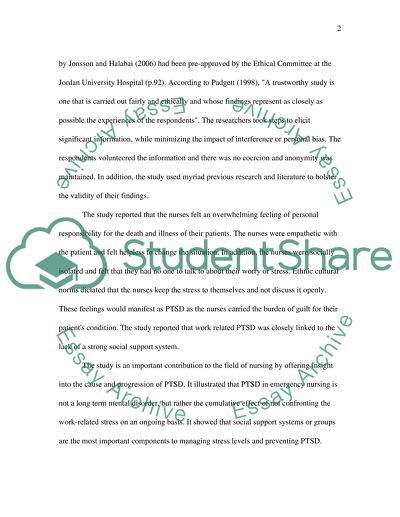 Extract of sample "Summary on a research article"

Critical Review A study by Jonsson and Halabai (2006) d "Work Related Post-Traumatic Stress as Described by Jordanian Emergency Nurses" was conducted to find the cause of post-traumatic stress syndrome (PTSD) in a representative group of Jordanian nurses. According to Jonsson and Halabai (2006) the research "was undertaken using hermeneutic phenomenology" (p.89). The qualitative study used a descriptive questionnaire with the implication that the events described would be interpreted by the respondent's culture and status as well as the limits of language and translation. The researchers selected the responses that were most appropriate for the study from a group of 160 respondents to a questionnaire. The researchers then evaluated the selected responses using hermeneutics to find common themes and "initial inklings about the structure of the phenomena" (p.91).
The study found that there was a relationship between the stress of performing the duties of a Jordanian nurse and the incidence of PTSD. The study also found that the stress was made more traumatic by the lack of professional and personal support systems. The researchers identified several common feelings that were the cause of their work-related stress. The study reported that a feeling of isolation and alienation, and empathy and helplessness were common threads that ran throughout the descriptive reports.
The study established initial trustworthiness by the credentials of the researchers and the publication in the peer-reviewed journal Accident and Emergency Nursing. The study adhered to scientifically sound methods and acceptable research ethics. The study by Jonsson and Halabai (2006) had been pre-approved by the Ethical Committee at the Jordan University Hospital (p.92). According to Padgett (1998), "A trustworthy study is one that is carried out fairly and ethically and whose findings represent as closely as possible the experiences of the respondents". The researchers took steps to elicit significant information, while minimizing the impact of interference or personal bias. The respondents volunteered the information and there was no coercion and anonymity was maintained. In addition, the study used myriad previous research and literature to bolster the validity of their findings.
The study reported that the nurses felt an overwhelming feeling of personal responsibility for the death and illness of their patients. The nurses were empathetic with the patient and felt helpless to change the situation. In addition, the nurses were socially isolated and felt that they had no one to talk to about their worry or stress. Ethnic cultural norms dictated that the nurses keep the stress to themselves and not discuss it openly. These feelings would manifest as PTSD as the nurses carried the burden of guilt for their patient's condition. The study reported that work related PTSD was closely linked to the lack of a strong social support system.
The study is an important contribution to the field of nursing by offering insight into the cause and progression of PTSD. It illustrated that PTSD in emergency nursing is not a long term mental disorder, but rather the cumulative effect of not confronting the work-related stress on an ongoing basis. It showed that social support systems or groups are the most important components to managing stress levels and preventing PTSD. Nurses and health care management should work to promote communication and social interaction among peers.
References
Jonsson, A., & Halabai, J. (2006). Work-related post-traumatic stress as described by Jordanian emergency nurses [Electronic version]. Accident and Emergency Nursing, 14(2), 89-96. from Elsevier.
Padgett, D. K. (1998). Qualitative methods in social work research: Challenges and rewards. Thousand Oaks, CA: Sage Publications. Read More
Share:
Tags
Cite this document
(“Summary on a research article Essay Example | Topics and Well Written Essays - 500 words”, n.d.)
Retrieved from https://studentshare.org/miscellaneous/1532001-summary-on-a-research-article

CHECK THESE SAMPLES OF Summary on a research article

ABC focuses on costs associated with activities, but also evaluates whether those activities add value, thus providing a means of understanding how to most effectively reduce costs. In addition to cost reduction benefits, applying ABC giv...

13 Pages(3250 words)Assignment
sponsored ads
Save Your Time for More Important Things
Let us write or edit the essay on your topic "Summary on a research article" with a personal 20% discount.
GRAB THE BEST PAPER

Let us find you another Essay on topic Summary on a research article for FREE!