Critical review of the novels: Christ in Concrete by DiDonato, Giants in the Earth, by Rolvaag, and Native Son by Richard Wright - Essay Example

Comments (0)
Add to wishlistDelete from wishlist
Cite this document
Summary
I. The novels Christ in Concrete by DiDonato, Giants in the Earth, by Rolvaag, and Native Son by Richard Wright share common underlying themes of disillusionment and disappointment with the American Dream. The hardships of life in America for the uprooted immigrants or minorities confront the characters of these novels at periods of their life when youth must give way to adulthood and responsibility…
Download full paperFile format: .doc, available for editing
HIDE THIS PAPERGRAB THE BEST PAPER95.7% of users find it useful 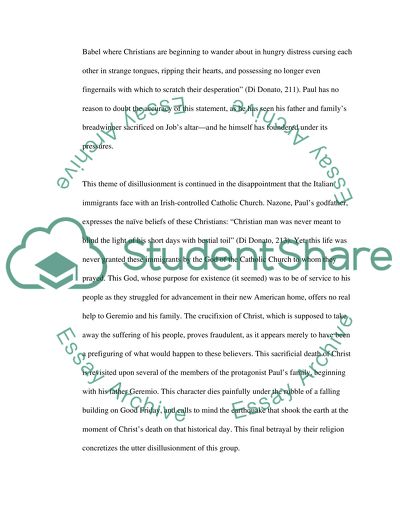 Extract of sample "Critical review of the novels: Christ in Concrete by DiDonato, Giants in the Earth, by Rolvaag, and Native Son by Richard Wright"

Download file to see previous pages II. The disillusionment and disappointment depicted in Christ in Concrete represents the overwhelming disenchantment of the Italians with their American environment. The American dream that brought these immigrants to the land has proven itself to be without substance, a mere illusion as the hardships and injustices of life take their toll on the family headed by Geremio. They find that their options for earning are limited to the Job, and almighty establishment that manifests as a construction company. This symbolizes a gargantuan tower of that exacts toil and sweat and stands between the family and its hopes of advancing itself-or even of earning a minimal amount to keep itself alive. The dual meaning of the word "Job" gives the idea of work and suffering (as the biblical character Job suffered). This becomes the true symbol of the American dream; it is how the dream manifests itself in reality. Nazone, the godfather of the protagonist expresses succinctly what the American experience has meant for his people: "This land has become a soil that has contradicted itself, a country of Babel where Christians are beginning to wander about in hungry distress cursing each other in strange tongues, ripping their hearts, and possessing no longer even fingernails with which to scratch their desperation" (Di Donato, 211). Paul has no reason to doubt the accuracy of this statement, as he has seen his father and family's breadwinner sacrificed on Job's altar-and he himself has foundered under its pressures.
This theme of disillusionment is continued in the disappointment that the Italian immigrants face with an Irish-controlled Catholic Church. Nazone, Paul's godfather, expresses the nave beliefs of these Christians: "Christian man was never meant to blind the light of his short days with bestial toil" (Di Donato, 213). Yet, this life was never granted these immigrants by the God of the Catholic Church to whom they prayed. This God, whose purpose for existence (it seemed) was to be of service to his people as they struggled for advancement in their new American home, offers no real help to Geremio and his family. The crucifixion of Christ, which is supposed to take away the suffering of his people, proves fraudulent, as it appears merely to have been a prefiguring of what would happen to these believers. This sacrificial death of Christ is revisited upon several of the members of the protagonist Paul's family, beginning with his father Geremio. This character dies painfully under the rubble of a falling building on Good Friday, and calls to mind the earthquake that shook the earth at the moment of Christ's death on that historical day. This final betrayal by their religion concretizes the utter disillusionment of this group.
III. The novel Giants in the Earth also depicts disillusionment with the American dream, as Per and Beren Hansa travel from Norway to manifest their destiny on the American prairies. Yet this novel depicts a more balanced and view of the situation, as Per Hansa has come seemingly prepared for the hardships that the new land would entail. In fact, he seems to choose it as he declines the offer of Beren's parents that he accept all their riches in exchange for remaining in Norway. The transplant of his family was as the fulfilment of a romance. ...Download file to see next pagesRead More
Share:
Tags
Cite this document
(“Critical review of the novels: Christ in Concrete by DiDonato, Giants Essay”, n.d.)
Critical review of the novels: Christ in Concrete by DiDonato, Giants Essay. Retrieved from https://studentshare.org/miscellaneous/1529617-critical-review-of-the-novels-christ-in-concrete-by-didonato-giants-in-the-earth-by-rolvaag-and-native-son-by-richard-wright

CHECK THESE SAMPLES OF Critical review of the novels: Christ in Concrete by DiDonato, Giants in the Earth, by Rolvaag, and Native Son by Richard Wright

In order to compare the welfare system of the three proposed countries, it is important to first develop a comparative method that would guide in comparing the three states. For the purpose of this paper, a binary comparison would be conducted. The implicit comparison would deal with Britain while the explicit comparison would explore the USA and Canada. Thereby a small N’ study would be used, that is, of three countries.
The three countries selected to share a similarity in the form that these countries are a welfare state. This is when welfare is mainly funded by the state. While the USA and Canada focus on the liberal welfare state, the welfare state of the UK is not quite defined.
The comparison of the welfare...
8 Pages(2000 words)Term Paper
sponsored ads
Save Your Time for More Important Things
Let us write or edit the essay on your topic "Critical review of the novels: Christ in Concrete by DiDonato, Giants in the Earth, by Rolvaag, and Native Son by Richard Wright" with a personal 20% discount.
GRAB THE BEST PAPER

Let us find you another Essay on topic Critical review of the novels: Christ in Concrete by DiDonato, Giants in the Earth, by Rolvaag, and Native Son by Richard Wright for FREE!