Comments (0)
Add to wishlistDelete from wishlist
Cite this document
Summary
It is a statute of Jesus Christ and is found on top of mount Corcovado in Brazil. The statute is outstanding because of the significance of its subject, Jesus Christ that has led to development of…
Download full paperFile format: .doc, available for editing
HIDE THIS PAPERGRAB THE BEST PAPER96.8% of users find it useful 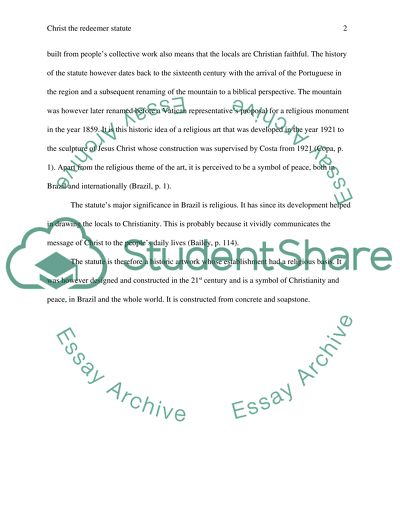 Christ the redeemer statute The ‘Christ the redeemer statute’ is one of the world’s outstanding arts. It is a statute of Jesus Christ and is found ontop of mount Corcovado in Brazil. The statute is outstanding because of the significance of its subject, Jesus Christ that has led to development of other similar statutes across the world. It is also significant because it is one of the largest of such statutes, globally. In Brazil, the statute is revered for its religious attribution. This paper seeks to discuss aspects of the famous ‘Christ the redeemer statute’ in Brazil.
The statute’s geographical location is the Brazilian region of “Rio de Janeiro” (Darpan, p. 379). The artwork is heavily built with a height of almost 40 meters and a weight of about 700 tons. Such features are exemplified by the location of the statute that rests on a mountaintop. It is built at one of mount Corcovado’s picks and lies at an altitude of about 700 meters above the sea level. The statute also directly faces Janeiro city, on its outskirts (Darpan, p. 379). Even though the history of the statute’s development went for more than a century, its actual construction works took about ten years. Communal participation through contributions led to the development that is majorly concrete but has soapstone finishing on the surface. A lot of renovation work has also been done on the statute whose value is estimated to have reached about 250000 dollars (Jetsetlife, p. 1). “Carlos Oswald” designed the art that was then sculptured by “Paul Landowski” (Copa, p. 1).
Development of the artwork and its history is majorly religious. This is deducible from the sculpture’s image and the history of events that led to its development. Its representation of the image of Jesus Christ, the pillar of Christian faith, indicates a religious theme of the art and the fact that it was built to communicate reverence to Jesus Christ, in the region. Having been built from people’s collective work also means that the locals are Christian faithful. The history of the statute however dates back to the sixteenth century with the arrival of the Portuguese in the region and a subsequent renaming of the mountain to a biblical perspective. The mountain was however later renamed before a Vatican representative’s proposal for a religious monument in the year 1859. It is this historic idea of a religious art that was developed in the year 1921 to the sculpture of Jesus Christ whose construction was supervised by Costa from 1921 (Copa, p. 1). Apart from the religious theme of the art, it is perceived to be a symbol of peace, both in Brazil and internationally (Brazil, p. 1).
The statute’s major significance in Brazil is religious. It has since its development helped in drawing the locals to Christianity. This is probably because it vividly communicates the message of Christ to the people’s daily lives (Bailey, p. 114).
The statute is therefore a historic artwork whose establishment had a religious basis. It was however designed and constructed in the 21st century and is a symbol of Christianity and peace, in Brazil and the whole world. It is constructed from concrete and soapstone.

CHECK THESE SAMPLES OF Chrsit the Redeemer Statue

Generational Shifts in the Workplace

...? Analysis of the Statue of Demedji and Hennutsen Museum Label Demedji and Hennutsen (ca. 2465-2438B.C Limeston with remains of paint Rogers Fund, 1951(51.37) Old Kingdom While the Metropolitan Museum of Art contains a staggering amount of cultural artifacts, some of the most notable are those from the ancient Egyptian period. In addition to having the added interest of being ancient, many of these artifacts are of a fantastical nature that creates an uncanny effect upon observation. One such prominent artifact within this context of understanding is the Statue of Demedi and Hennutsen. As a tremendous amount of analysis and information has been presented on Egyptian artifacts from this period, it’s necessary to approach the object... from a...
3 Pages(750 words)Essay

A Greek Kouros statue,a Roman Venus and a Flavian marble statue of the Diadoumemos

...? Time and A Greek Kouros statue, a Roman Venus and a Flavian marble statue of the Diadoumemos: Three passive nudes that are of Greekorigin, with two having Roman interpretation Two of the statutes that will be presented in the final report are from the Getty Villa Museum with the third being from the Metropolitan Museum of Art. The first statue is a Kouros, which is a statue that is designed as a grave marker. The statue dates back to approximately 530 BCE and is typical of this type of utilitarian work. The statue is in room 211 of the Getty Villa Museum under the title Athletes and Competition. The statue is not...
7 Pages(1750 words)Essay

...Michelangelo's Statue of David The statue of David is well-known nowadays. The contemporaries are enchanted by its magnificent forms and aesthetic beauty. There is a legend that a statue of David was created after his victory over Goliath. Michelangelo’s David was depicted before the battle. David’s victory is presumably explained by a slight presence of the slingshot he has on his shoulder. His cleverness was the most beneficial thing he had and a decisive means of victory. Michelangelo was born in Firenze and his city had numerous enemies. There was not enough physical power in the city and the citizens were hoping for a power of their minds only. Cunningness and cleverness were two...
3 Pages(750 words)Personal Statement

Zeus. The Statue Of Zeus

...The Statue of Liberty was presented to the United s by France in 1886 to mark the centennial of the United s and was a gesture of friendship and goodwill from France to America. The statue is of a woman standing upright, dressed in a robe, and wearing a crown with seven pointed spiked rays, and holding a stone tablet close to her body in her left hand and a flaming torch high in her right hand. The tablet bears the words "JULY IV MDCCLXXVI" (July 4, 1776), commemorating the date of the United States Declaration of Independence. The Statue of Liberty was designed by French sculptor Frederic Auguste Bartholdi and completed in July 1884. In order to prepare for the statue's...
3 Pages(750 words)Essay

...Statue of Liberty Introduction The Statue f Liberty is probably the best known and greatest symbol f American freedom. It stands 151 feet tall on Liberty Island in New York Harbor. When the French sculptor Fredric Bartholdi visited America in 1871, he was so impressed with this country that he vowed "to make a statue that can be seen all the way from America to France." When Fredric Bartholdi returned to America in 1874, he entered the country at New York Harbor (as millions f immigrants would do), and had a vision f a giant goddess f liberty guarding this entrance to freedom. He returned to France and began work on his greatest creation. The statue entitled "Liberty...
7 Pages(1750 words)Essay

...God as Redeemer Introduction Religion and culture go hand in hand in an individual lifetime here on earth reasonbeing culture is the complete social tradition of a man. To be more specific the normal heritage of a human group, that is the way they leave and coexist with one another. Religion is more culture reason being it made up of belief and values. However, despite believing in one supernatural being, there is a division that later formed religion due to different in interpreting what GOD wanted from man. This has made me to believe that religion is mans effort to reach GOD. To begin with, religion is a critical aspect in a man’s experience. Religion involves faith and speaking from a personal experience, faith has...
2 Pages(500 words)Admission/Application Essay

... George Washington’s Statue George Washington’s statue is a sculpture that was sculptured by Horatio Greenough in 1840 after receiving an order from the congress. “The sculpture portrays the first president seated, draped in a toga with his chest exposed” (George Washington’s Mount Vernon 2014). The right hand of the sculpture stretches upwards whereas the left hand extends outwards as if offering a sword, signifying the military power of Washington during the start of the revolution. The main reason for sculpturing Washington’s statue was to commemorate his birth that took place in 1732. This is evidenced by not only the exposed chest, but also possession of a sword. In most occasions, the exposure of a man’s chest signifies... an...
1 Pages(250 words)Essay

The Statue of Liberty

...The Statue of Liberty Introduction The statute liberty is a famous statute located at the heart of the New York City in the United States. The statue is simply a sculpture representing the colossal neoclassic in the Liberty Island of the New York City in Manhattan (Kent 9). The statue is said to have been designed by one of the greatest sculptors of that time, Bartholdi Frédéric, an Italian-French national. The sculpture was dedicated in 1886, being a gift from France to the people of the United States. The statue has been carved in the image of a female figure, robed in a royal outfit, representing one of the Roman goddess, Libertas. It is believed that this goddess...
7 Pages(1750 words)Essay
sponsored ads
Save Your Time for More Important Things
Let us write or edit the research paper on your topic "Chrsit the Redeemer Statue" with a personal 20% discount.
GRAB THE BEST PAPER

Let us find you another Research Paper on topic Chrsit the Redeemer Statue for FREE!