Comments (0)
Add to wishlistDelete from wishlist
Cite this document
Summary
From the conflicts over Pope Pius XII, whether portrayed as a pitiless anti-Semite or a saver of many Jewish lives during World War II, to the confusion over how to take the 1998 Vatican document on the Holocaust, the Catholic Church is in great dispute over its history of relations with the Jews…
Download full paperFile format: .doc, available for editing
HIDE THIS PAPERGRAB THE BEST PAPER95.6% of users find it useful 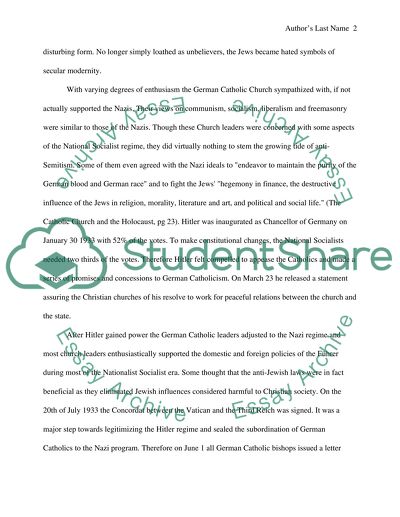 Download file to see previous pages The continued anti-Semitic feelings of the Church stem from Christian teachings based on interpretations of the New Testament that have also contributed to the Holocaust and the persecution of Jews in Europe over the centuries.
In 1814, Jews in the Papal States were locked into cramped ghettos at night, were forbidden to practice law or medicine, to hold public office or to hire Christian servants. Meanwhile elsewhere in Europe, Jews were increasingly free to live as they wanted. These practices were the inspiration for the racial laws enacted by the Nazis and the Italian Fascists in the 1930's. After the fall of the Papal States in 1870, the Church's hostility towards the Jews began to take an even more disturbing form. No longer simply loathed as unbelievers, the Jews became hated symbols of secular modernity.
With varying degrees of enthusiasm the German Catholic Church sympathized with, if not actually supported the Nazis. Their views on communism, socialism, liberalism and freemasonry were similar to those of the Nazis. Though these Church leaders were concerned with some aspects of the National Socialist regime, they did virtually nothing to stem the growing tide of anti-Semitism. Some of them even agreed with the Nazi ideals to "endeavor to maintain the purity of the German blood and German race" and to fight the Jews' "hegemony in finance, the destructive influence of the Jews in religion, morality, literature and art, and political and social life." (The Catholic Church and the Holocaust, pg 23). Hitler was inaugurated as Chancellor of Germany on January 30 1933 with 52% of the votes. To make constitutional changes, the National Socialists needed two thirds of the votes. Therefore Hitler felt compelled to appease the Catholics and made a series of promises and concessions to German Catholicism. On March 23 he released a statement assuring the Christian churches of his resolve to work for peaceful relations between the church and the state.
After Hitler gained power the German Catholic leaders adjusted to the Nazi regime and most church leaders enthusiastically supported the domestic and foreign policies of the Fhrer during most of the Nationalist Socialist era. Some thought that the anti-Jewish laws were in fact beneficial as they eliminated Jewish influences considered harmful to Christian society. On the 20th of July 1933 the Concordat between the Vatican and the Third Reich was signed. It was a major step towards legitimizing the Hitler regime and sealed the subordination of German Catholics to the Nazi program. Therefore on June 1 all German Catholic bishops issued a letter withdrawing earlier prohibitions against membership of the Nazi party and encouraged the faithful to be loyal and obedient to the new program. They looked upon the National Socialist regime as another anti-communist authoritarian system, not recognizing Hitler's totalitarian ambitions. On March 24, Hitler acquired the support of the Catholic Centre Party for passage of the Enabling Act, under which Hitler could enact ordinary legislation by decree. This right was extended a year after ...Download file to see next pagesRead More
Share:
Tags
Cite this document
(“Holocaust and Jewish-Christian Relations Essay Example | Topics and Well Written Essays - 1750 words”, n.d.)
Holocaust and Jewish-Christian Relations Essay Example | Topics and Well Written Essays - 1750 words. Retrieved from https://studentshare.org/miscellaneous/1507636-holocaust-and-jewish-christian-relations

CHECK THESE SAMPLES OF Holocaust and Jewish-Christian Relations

The Significance of the 1961 Vienna Convention on Diplomatic Relations

The ratification of the Convention was momentous in that it called for the ‘establishment of diplomatic relations between states’ and for ‘permanent diplomatic missions to take place by mutual consent.”2 The foundation of these diplomatic relations hold considerable value as it cemented equitably and just principles that govern diplomatic relations and practice among states as the rules afforded in the convention lay down the obligations of the receiving states on matters regarding amenities, privileges and immunities accorded to envoys, diplomats, diplomatic representatives and their families, anticipates potential abuse by members of the mission or and how the receiving state can counter such abuse.
...
11 Pages(2750 words)Assignment

A history of anti-Semitism and it is a prevalent belief in Christendom that the Jews, as the murderers of Christ, deserve all possible sufferings is the reason that Hitler's massacre of the Jews was met with silent acceptance from the vast majority of his subjects. The continued anti-Semitic feelings of the Church stem from Christian teachings based on interpretations of the New Testament that have also contributed to the Holocaust and the persecution of Jews in Europe over the centuries.
In 1814, Jews in the Papal States were locked into cramped ghettos at night, were forbidden to practice law or medicine, to hold public office or to hire Christian servants. Meanwhile, elsewhere in Europe, Jews were increasingly free to live...
11 Pages(2750 words)Assignment

It may have been argued that since people, in general, are greedy and as a natural instinct are ambitious- they may always want a bigger share of the scarce resources and try to...
9 Pages(2250 words)Term Paper

By virtue of the Health and Safety At Work Act 1974 the employer is under a statutory duty to maintain the water and sewage plant if it is reasonable and practical to do so. The duty is contained in Section 2 which mandates that the employer ensure the safety and welfare of all empl...
15 Pages(3750 words)Case Study

In recent times questions regarding the impact of Christianity over culture have become so prevalent that several of the modern intellectual disciplines consider it an archetype of orthodoxy that is aimed at restraining the newer cultural trends (Niebuhr 1956 p. 1-2).
However, the existing historical shreds of evidence clearly convey that despite Christianity has always been one of the most important factors in the context of determining people’s reciprocation towards a particular cultural trend, but different civilizations at different points of time have denied the impact of the Christian culture as those perceived that it can be a threat against individuality of their respective cultural tends, “Not only Jews b...
11 Pages(2750 words)Assignment
sponsored ads
Save Your Time for More Important Things
Let us write or edit the essay on your topic "Holocaust and Jewish-Christian Relations" with a personal 20% discount.
GRAB THE BEST PAPER

Let us find you another Essay on topic Holocaust and Jewish-Christian Relations for FREE!