Comments (0)
Add to wishlist Delete from wishlist
Cite this document
Summary
The paper 'Beliefs and Ways of Life' presents preparing a World Religious Report which is a tiresome task as there are a number of religious sects all over the world with different beliefs and ways of life. The essay attempts to make a study on the Jehovah’s witnesses…
Download full paper File format: .doc, available for editing
HIDE THIS PAPERGRAB THE BEST PAPER92.5% of users find it useful 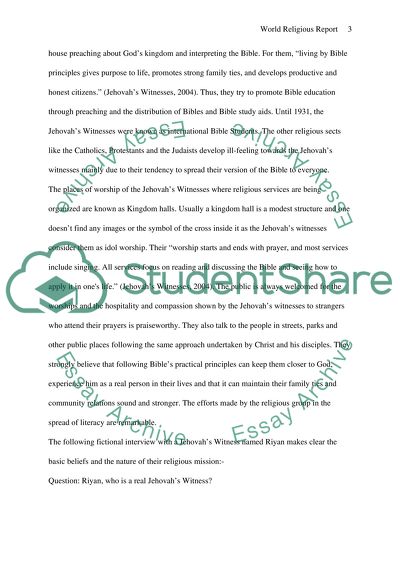 Extract of sample "Beliefs and Ways of Life"

Download file to see previous pages The Jehovah’s witnesses postulated the non-existence of hell, the non-existence of the Trinity, reduced the Holy Spirit from a person to a force and believed in the mortality of the soul. Similarly, they do not celebrate Christmas as they do not celebrate holidays or birthdays. According to them Jesus never commanded Christians to celebrate his birth. On the other hand, he asked his disciples to memorize or remember his death. Thus, the most important annual event for the Jehovah witness is the commemoration of Jesus’ death. They also do not believe in the Christian doctrine of Trinity, the concept of the three persons in God- the Father, Son, and the Holy Spirit. To support its doctrines, the Watchtower organization (which is the author and teacher of all official Jehovahs Witness theology), has even altered the Bible to make it agree with its changing and non-Christian teachings. The lives of Jehovah’s disciples are thus governed by their understanding of the scripture as interpreted by the Watchtower Bible and Tract Society of New York. For them, Jehovah is the Supreme Being and creator of everything and Jesus is only yet another creation of this supreme entity. Even though they don’t believe Jesus to be the son of God, they believe that Jesus’ death was necessary for the atonement of the sins committed by the first man Adam.
They strongly believe in the Word of God and resort to preaching as a major part of their missionary life. Thus, one finds the Jehovah's witnesses moving from door to door, house to house preaching about God’s kingdom and interpreting the Bible. For them, “living by Bible principles gives purpose to life, promotes strong family ties, and develops productive and honest citizens.” (Jehovah’s Witnesses, 2004). Thus, they try to promote Bible education through preaching and the distribution of Bibles and Bible study aids. Until 1931, the Jehovah’s Witnesses were known as International Bible Students. The other religious sects like the Catholics, Protestants and the Judaists develop ill-feeling towards the Jehovah’s witnesses mainly due to their tendency to spread their version of the Bible to everyone. ...Download file to see next pages Read More
Share:
Tags
Cite this document
(Beliefs and Ways of Life Case Study Example | Topics and Well Written Essays - 1933 words, n.d.)
Beliefs and Ways of Life Case Study Example | Topics and Well Written Essays - 1933 words. Retrieved from https://studentshare.org/religion-and-theology/1544452-world-religions-report

CHECK THESE SAMPLES OF Beliefs and Ways of Life

Starting in 1975 up to the present, Harley-Davidson Inc. has been experiencing some turbulent within the business environment. Japanese motor companies like Honda Motor, Suzuki and Yamaha became a tight competitor of Harley Davidson.
Internal and external strategies were immediately applied in the business to make the company survive. Business strategies include the extent of the leveraged buyout, infiltration of foreign-made bikes as well as implementing some government regulations.
Despite the tight competition in the global market, Harley-Davidson manages to increase its annual revenue up to $5.34 billion in 2005 from its previous year’s revenue of $959.6 million.1 Harley-Davidson’s market position is limi...
9 Pages (2250 words) Case Study

Corporate leaders understand that employee's work and family lives rarely inextricably linked. They always have been but today, with increased pressures in both domains, the overlap and the challenges created are increasingly obvious and complex to resolve. Solving the paradox seated in an organization need to be optimally productive and the individuals need to find quality time to meet domestic responsibilities, to establish, maintain and grow relationships and to relax and re-charge, is the great challenge of the new millennium. Most managers have yet to overcome the conundrum for themselves let alone help employees resolve it in their lives.
The prospects for easing the work/ life imbalance dilemma lie, at least in part, i...
10 Pages (2500 words) Assignment

The systems for thinking perspective and T.O.P perspective styles have been chosen as this article needs to have an explicitly straight conclusion. Moreover, the ethical issues concerning the organization have also not been given adequate treatment in the article which makes it a one-sided communication on the part of the author. Also, certain other critical issues concerning the article involve lack of adequate clarification on the part of the author regarding various key issues such as what would be the resultant consequences in case of failure on the part of the employee / prospective employee to adhere to the rules and regulations governing the protection of privacy of the organizational data. Are there any legal obligations i...
11 Pages (2750 words) Assignment

He was born and raised by Marrow Coffey and William Franklin Graham in Charlotte, North Carolina on November 7, 1918, and dreamt of becoming a baseball player. He has a sister named Katherine, both of which were raised in the Associate Reformed Presbyterian Church. In 1933, at the end of the Prohibition in the United States, their father forced them to drink until they vomit, leading to Graham’s aversion towards alcohol and drugs. He graduated from...
9 Pages (2250 words) Essay

Community life has its advantages but also has its limitations to the members and the outsiders.
“The good things we secure for ourselves are uncertain and precious until it is secured for everyone and incorporated into our common life.”-Jane Addams. With society moving faster and more detached to technology, busy schedules, and job changes, it becomes harder and harder to feel a sense of community. This can result in a life of solitude and a lose a sense of belonging. Community life helps extract people out of this solitude life and introduce better, challenging and fun tasks such as participation in acts of kindness. It also provides room for volunteering, meeting neighbors, discussing important issues with othe...
7 Pages (1750 words) Case Study
sponsored ads
Save Your Time for More Important Things
Let us write or edit the case study on your topic "Beliefs and Ways of Life" with a personal 20% discount.
GRAB THE BEST PAPER

Let us find you another Case Study on topic Beliefs and Ways of Life for FREE!