Comments (0)
Add to wishlistDelete from wishlist
Cite this document
Summary
Considerable time and efforts have been spent on the evolution of a system by which the potential danger of the global warming can be contained. As a matter of simple background of the issue; global warming is caused by the thickening of the ozone layer surrounding the atmosphere of the earth, by the carbon-dioxide and other green house gases being emitted by the burning of fossil-fuel and other energy sources world-over…
Download full paperFile format: .doc, available for editing
HIDE THIS PAPERGRAB THE BEST PAPER91.7% of users find it useful 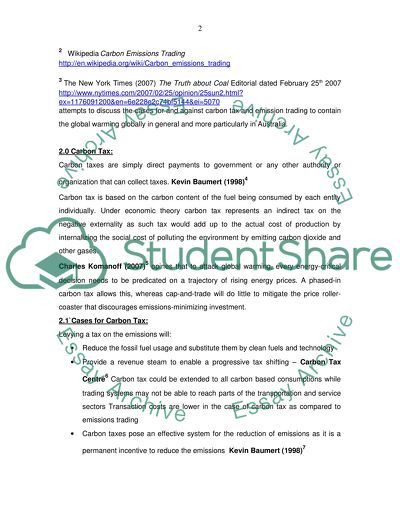 Download file to see previous pages Carbon Tax is a kind of Pollution Tax purported to be applied on the energy sources which emit carbon dioxide. (Wikipedia)1 The Carbon Emission Trading on the other hand as provided by Kyoto Protocol involves the global trading of permits to emit green house gases converted in terms of Carbon dioxide. (Wikipedia) 2
Obviously there is a need to put a price on carbon to force companies to abandon older, dirtier technologies for newer, cleaner ones. Today the atmosphere is being used as municipal dump where carbon dioxide is deposited free. The New York Times (2007) 3
Once the governments start putting a monetary value on this privilege, business and industrial houses will be forced to evolve smarter ways to run their business. A carbon tax is one approach. Another is to impose a steadily decreasing cap on emissions and
Several arguments are being advocated for and against each of these two forms of measures that can be undertaken by the different countries of the world. This case study ______________________________________________________________________
Carbon tax is based on the carbon content of the fuel being consumed by each entity individually. Under economic theory carbon tax represents an indirect tax on the negative externality as such tax would add up to the actual cost of production by internalizing the social cost of polluting the environment by emitting carbon dioxide and other gases.
Charles Komanoff (2007)5 opines that to attack global warming, every energy-critical decision needs to be predicated on a trajectory of rising energy prices. A phased-in carbon tax allows this, whereas cap-and-trade will do little to mitigate the price roller-coaster that discourages emissions-minimizing investment.
2.1Cases for Carbon Tax:
Levying a tax on the emissions will:
Reduce the fossil fuel usage and substitute them by clean fuels and technology
Provide a revenue steam to enable a progressive tax shifting - Carbon Tax Centre6 Carbon tax could be extended to all carbon based consumptions while trading systems may not be able to reach parts of the transportation and service sectors Transaction costs are lower in the case of carbon tax as compared to emissions trading
Carbon taxes pose an effective system for the reduction of emissions as it is a permanent incentive to reduce the emissions Kevin Baumert ...Download file to see next pagesRead More
Share:
Tags
Cite this document
(“Climate Change and Tax Policy Essay Example | Topics and Well Written Essays - 2250 words”, n.d.)
Climate Change and Tax Policy Essay Example | Topics and Well Written Essays - 2250 words. Retrieved from https://studentshare.org/miscellaneous/1501398-climate-change-and-tax-policy

CHECK THESE SAMPLES OF Climate Change and Tax Policy

...Introduction Change is an aspect that cannot be ignored in any given organisation yet the human instinct naturally opposes change. Change usually occurs frequently and at a rapid pace. Consequently, those who tend to resist it may slow down an organisation or even destroy it altogether. Resistance to change usually occurs as a result of the natural tendency to maintain status quo. Human beings generally have an inclination towards stability and this means that organizational change may be regarded as something that will cause instability. Usually, employees may begin depicting some signs of resistance through scepticism. This kind of behaviour creates a barrier that may make it extremely hard to implement organisational change. In light...
10 Pages(2500 words)Coursework

... has been functioning for the last 5 years with challenging major problems. The relocation of jobs for new member states came to the surface, but these are mainly economic difficulties. These problems can be traced to the impact of internet revolution, the changing pattern of foreign competition due to globalisation. From the political angle, the problems of EU as for expansion of membership seem to be prudent. The ratification of the Constitutional Treaty and the Lisbon Treaty did tender some difficulties. The present global situation and macroeconomic position does not provide a positive climate for enlargement. The time of economic growth is favorable for the admittance for the new members. Between 1995-2007 the EU more than doubled...
9 Pages(2250 words)Case Study

...Climate change Can we imagine an Earth where there are no green mountains, no deep blue seas and no living creatures? No. But a disaster of such magnitude and dimension is looming over Earth. Humans have identified this threat, defined it and given it a name, global warming. This dangerous proposition is based on the truth that even a 5 % increase in the surface temperature on Earth can wipe out life from this beautiful planet. And the temperature is increasing as never before. It was in 1990s that the world began to hear serious warnings on global warming and climate change. The summary for policy makers prepared as part of the first assessment report by Inter-governmental Panel on Climate Change was the first ever in depth study...
6 Pages(1500 words)Literature review
sponsored ads
Save Your Time for More Important Things
Let us write or edit the essay on your topic "Climate Change and Tax Policy" with a personal 20% discount.
GRAB THE BEST PAPER

Let us find you another Essay on topic Climate Change and Tax Policy for FREE!