Comments (0)
Add to wishlistDelete from wishlist
Cite this document
Summary
Enhancing occupational safety and environmental health by adapting to alternative fuels carries a big paradigm shift in the use, utilization, preservation and protection of natural resources in a sustainable manner. Since 1900s, the alternate fuels are being used in power engines…
Download full paperFile format: .doc, available for editing
HIDE THIS PAPERGRAB THE BEST PAPER92.2% of users find it useful 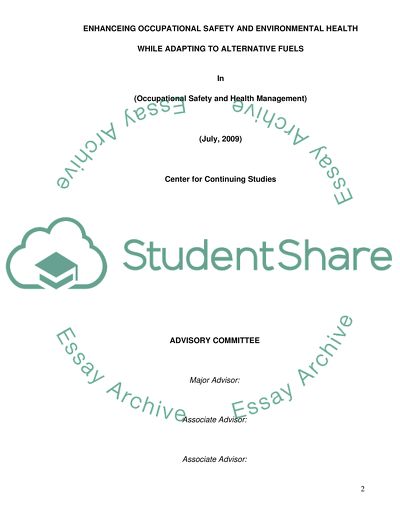 The process includes the reaction of vegetable oil with the alcohols in the presence of a catalyst, while the alcohols are usually ethanol or methanol. For the purification of the bio-diesel and removal of the phospholipids, the ultra-shear mixers or the De-gumming process is used, as they can efficiently blend and mix the acid or water into the oil for the formation of bio-diesel. The other processes of bio-diesel production involve the following (Dub, Marc A, et al. 2007).
There are numerous positive impacts on occupational health and safety when the bio-diesel replaces the hydro-carbon fuels. Serious, continuous and long enduring exposure to the petroleum fuels has always caused environmental pollution (Fernando, Sandum D...
4 Pages(1000 words)Essay

The efficient market hypothesis states that securities are typically in equilibrium and that they are fairly priced in th...
8 Pages(2000 words)Article
sponsored ads
Save Your Time for More Important Things
Let us write or edit the essay on your topic "Enhancing Occupational Safety and Environmental Health while Adapting to Alternative Fuels" with a personal 20% discount.
GRAB THE BEST PAPER

Let us find you another Essay on topic Enhancing Occupational Safety and Environmental Health while Adapting to Alternative Fuels for FREE!