Comments (0)
Add to wishlistDelete from wishlist
Cite this document
Summary
The present day business scenario is characterized by rapid changes in the economic environment, largely brought about by the phenomenon of globalization and the deregulation of markets. Organizations have to survive and be profitable in a fiercely competitive product market, with changing customer and investor demands…
Download full paperFile format: .doc, available for editing
HIDE THIS PAPERGRAB THE BEST PAPER97.6% of users find it useful 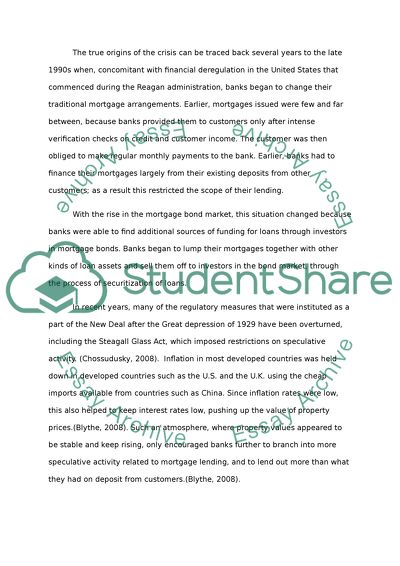 Download file to see previous pages This has given rise to the need for companies to pay a great deal of attention to employee performances on the job and motivate them effectively, in order to improve the productivity of an organization.
The recent credit crunch has hit the banking industry particularly hard, turning the spotlight on the manner of functioning of these institutions. The need for quality and accountability in these organizations has become even more evident, especially in a recessionary environment where productivity has become even tougher to attain. The management of human resources has come to play an even more important role in achieving that productivity and motivating employees has become vital, especially for the banking industry. This study therefore proposes to apply a case study approach to examine issues surrounding the motivation of employees in Barclays Bank.
The true origins of the crisis can be traced back several years to the late 1990s when, concomitant with financial deregulation in the United States that commenced during the Reagan administration, banks began to change their traditional mortgage arrangements. Earlier, mortgages issued were few and far between, because banks provided them to customers only after intense verification checks on credit and customer income. The customer was then obliged to make regular monthly payments to the bank. Earlier, banks had to finance their mortgages largely from their existing deposits from other customers; as a result this restricted the scope of their lending.
With the rise in the mortgage bond market, this situation changed because banks were able to find additional sources of funding for loans through investors in mortgage bonds. Banks began to lump their mortgages together with other kinds of loan assets and sell them off to investors in the bond market, through the process of securitization of loans.
In recent years, many of the regulatory measures that were instituted as a part of the New Deal after the Great depression of 1929 have been overturned, including the Steagall Glass Act, which imposed restrictions on speculative activity. (Chossudusky, 2008). Inflation in most developed countries was held down in developed countries such as the U.S. and the U.K. using the cheap imports available from countries such as China. Since inflation rates were low, this also helped to keep interest rates low, pushing up the value of property prices.(Blythe, 2008). Such an atmosphere, where property values appeared to be stable and keep rising, only encouraged banks further to branch into more speculative activity related to mortgage lending, and to lend out more than what they had on deposit from customers.(Blythe, 2008).
The model presented below graphically depicts the traditional model of mortgage lending as compared to the current, existing system which involves third party bond investors, with deregulation encouraging speculative activity by banking institutions.
Fig 1: The new model of mortgage lending (Source: http://news.bbc.co.uk/2/hi/business/7073131.stm)
THE NEW MODEL OF MORTGAGE LENDING
Top of Form
How it went wrong
Bottom of Form
As per the new model, the banks rely on additional source ...Download file to see next pagesRead More
Share:
Tags
Cite this document
(“MANAGING PEOPLE AND PRODUCTIVITY Essay Example | Topics and Well Written Essays - 4750 words”, n.d.)
Retrieved from https://studentshare.org/miscellaneous/1499199-managing-people-and-productivity

CHECK THESE SAMPLES OF MANAGING PEOPLE AND PRODUCTIVITY

Organizations and their management styles have evolved to a great extent in the service and manufacturing industry over the last century, and so have been the concepts of management and its functions. These evolutions can be traced to significant developments brought about by the industrial revolution, scientific management principles such as Taylorism and Fordism, transition of feudalistic to capitalistic approach and others in different sectors of manufacturing industries. However, the beginning of the industrial revolution was characterized by a rigid hierarchical bureaucratic way of organizing business enterprises, a style prevalent even today but only in military service organizations. Nevertheless, the manufacturing and busi...
8 Pages(2000 words)Assignment
sponsored ads
Save Your Time for More Important Things
Let us write or edit the essay on your topic "MANAGING PEOPLE AND PRODUCTIVITY" with a personal 20% discount.
GRAB THE BEST PAPER

Let us find you another Essay on topic MANAGING PEOPLE AND PRODUCTIVITY for FREE!