Comments (0)
Add to wishlistDelete from wishlist
Cite this document
Summary
It can therefore be implied that the enzyme cut the sample into two fragments only. This also implies that the R gene has only one restriction point for the enzyme
-the size of the gene is relatively the same as that of…
Download full paperFile format: .doc, available for editing
HIDE THIS PAPERGRAB THE BEST PAPER94.1% of users find it useful 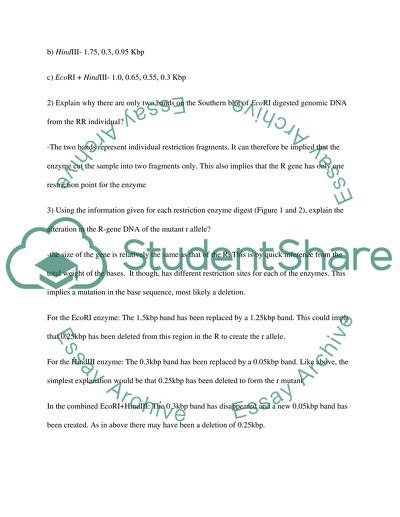 Data Analysis Task- Molecular (Southern Blotting Using the restriction map list the size of fragment(s) generated from digestion of the entire wildtype allele shown in Figure 1 with
a) EcoRI- 1.5, 1.2 Kbp
b) HindIII- 1.75, 0.3, 0.95 Kbp
c) EcoRI + HindIII- 1.0, 0.65, 0.55, 0.3 Kbp
2) Explain why there are only two bands on the Southern blot of EcoRI digested genomic DNA from the RR individual?
-The two bands represent individual restriction fragments. It can therefore be implied that the enzyme cut the sample into two fragments only. This also implies that the R gene has only one restriction point for the enzyme
3) Using the information given for each restriction enzyme digest (Figure 1 and 2), explain the alteration in the R-gene DNA of the mutant r allele?
-the size of the gene is relatively the same as that of the R. This is by quick inference from the total weight of the bases. It though, has different restriction sites for each of the enzymes. This implies a mutation in the base sequence, most likely a deletion.
For the EcoRI enzyme: The 1.5kbp band has been replaced by a 1.25kbp band. This could imply that 0.25kbp has been deleted from this region in the R to create the r allele.
For the HindIII enzyme: The 0.3kbp band has been replaced by a 0.05kbp band. Like above, the simplest explanation would be that 0.25kbp has been deleted to form the r mutant
In the combined EcoRI+HindIII: The 0.3kbp band has disappeared and a new 0.05kbp band has been created. As in above there may have been a deletion of 0.25kbp.
4) What are the possible outcomes to the primary sequence of the translated protein?
The protein may end up being modified to produce a less active analogue or useless protein. It thus forms a less coloured product, thus pink.
5) Why are there more bands in DNA from the carrier (Rr) than in the homozygous wild type (RR) or patient - what do the fainter bands represent?
-there are more bands due to the increased number of restriction sites present. Both of the genes contribute fragments to the gel that have been sectioned by the enzyme. These portions have complementary bases to the probe, thus forming more bands. Simply, there is a copy of R and r portions in the heterozygote. The lighter bands represent homozygote state. That is, there is less DNA to map. This can only imply that half the DNA is present.
6) Describe and explain what the resulting autoradiograph would look like if you performed this blot, but:
a) Samples were run without digesting the DNA with restriction enzymes.
-this would lead to a thick smear, as the cDNA would bind to the numerous complementary portions that would be available.
b) The DNA separated by gel electrophoresis was transferred to nitrocellulose or nylon without prior treatment with alkali.
-the alkali is needed to denature the DNA into single open strands. It thus would not give a result.
c) The nitrocellulose membrane was not blocked during pre-hybridisation.
-blocking is done to prevent background hybridisation signal. Thus if not done the result would include bands of unwanted DNA
d) The blot was processed without washing at high stringency.
-there would be numerous DNA ladders and mixed smears due to mixing of DNA from many external sources and also from unwanted portions.
7) When the blot was probed at high stringency with a probe made with DNA that flanks the R gene (as seen in Figure 1) a smear typical of thousands of hybridising bands was seen. How could this be explained?
-DNA that flanks the R gene has complementary portions for all the bases. It is thus not specific to any sequence. It therefore gives a smear characteristic of all the hybridized portions.
8) The turnaround time for Southern Blot analysis is typically around 10 days. Now that you have identified the region in which the mutation lies explain with detail how a faster test could be designed?
Now that the portion has been identified, a faster test would only need one to cut the DNA at the specific location. After that has been done, the cut portion is denatured, pre hybridized and transferred to a gel block. Alternatively, it could be run through PCR and analysed using an electronic DNA analyser. Read More
Share:
Tags
Cite this document
(“Data analysis task Assignment Example | Topics and Well Written Essays - 500 words”, n.d.)
Data analysis task Assignment Example | Topics and Well Written Essays - 500 words. Retrieved from https://studentshare.org/medical-science/1677798-data-analysis-task

...? Management Task Analysis AFFILIATION: Management Task Analysis Introduction to the Automobile Industry The globalization and continuous changes in the demands of the customers have created a new hype in the market and the organizations are undergoing drastic transformations to incorporate the changing dynamics of the environment (Andreas, Gassman, & Eisret, 2007; Koneig, 2010; Sturgeon, 2006). In order to survive in today’s competitive environment, the organizations need to ensure that they are proactive in every aspect and Gereffi, Humphrey and Sturgeon (2005) suggested that the companies need to continuously monitor the events happening in their surroundings. Although all the industries need to remain alert all the time so...
4 Pages(1000 words)Research Paper

...?Data Analysis Data Collection The data used for this study is drawn from two sets of data: Jobseekers Allowance claimants and Unemployed persons. Although the file downloaded contains datasets for the whole of England and Wales, this research will only extract data for the 32 cities of London. Data for unemployed persons was obtained from the Annual Population Survey (APS). The APS is conducted annually during which information on the number and percentage of people who are employed, economically active, unemployment rate and economically inactive is collected. The APS is intended to be representative of the whole of the population of the UK. The population covered by the survey is all people resident in private households and young...
7 Pages(1750 words)Coursework

...Data analysis forms a fundamental foundation of any research work and so the basis for the current paper. No research is complete without gathering of various data elements relevant to the paper, observing the numerical data and creating an empirical evidence for the conclusions arrived in the research. The company that is being studied is a photocopier design, manufacturing, sales and service organization. The organization has got global presence and has organized its divisions geographically namely the United States of America, United Kingdom, Europe, Asia and Australia. The period under study is from 1997 to 2001, a five year period. The basis for this particular study is the fact that the company promises to replace the copiers...
11 Pages(2750 words)Research Paper

.... Kotler-Berkowitz (2001) points out how data from the 1991 and 1992 waves of the British Household Panel Study, when statistically analyzed (using multinomial logistic regression analysis) state that religions influence the voting decisions of sizable number of British citizens. “Religious belonging, behaviour and belief, as well as the religious context of households, continue to influence British voting behaviour. Interaction effects among religious variables and between religious variables and class also operate to influence vote choice.” (Kotler-Berkowitz 2001). From the understanding of these previous studies, it is clear that these factors have to be studied. The following Section 2 will examine the collection of data, methodology...
9 Pages(2250 words)Essay

...Job Task Analysis A Job Task Analysis for a first level clerk in a personnel office in a branch of the military Job Descriptions A clerk in the first level will normally not be allocated duties which require more experience with the company. Thus, most of his duties will be generally concerning the personnel office with no specification. Some of the listed duties will include: Keeping all the records of the personnel office. Such records include names of all the employees in the military branch, work placements of all the employees, attendance registers and payment sheets of each worker. Other duties will include marking the attendance register, collecting job resumes and applications and submitting them to the human resource manager...
2 Pages(500 words)Essay

...Performing a Task Analysis Lecturer Performing a Task Analysis A task analysis breaks down the functions that a product or a system performs into a number of tasks or subtasks with the aim of describing how the product or system works. The objective of performing task analysis of a given product is to understand how the product works by determining the required inputs, methods and outputs, as well as determining the intentions or goals of the product in a bid to clearly understand the product (Fain, 2006). Task analysis begins with task identification, which involves the analysis of all user actions of the product. One can get information about task identification by observing people using the product (or recalling how the person uses...
2 Pages(500 words)Assignment

Let us find you another Assignment on topic Data analysis task for FREE!