Comments (0)
Add to wishlistDelete from wishlist
Cite this document
Summary
The author of the present research paper "The Problems Companies Face while Becoming Multinational" brings out that it is being rightly observed by the business fraternity of today that the only constant thing of today’s world is the word ‘change’ itself…
Download full paperFile format: .doc, available for editing
HIDE THIS PAPERGRAB THE BEST PAPER94.3% of users find it useful 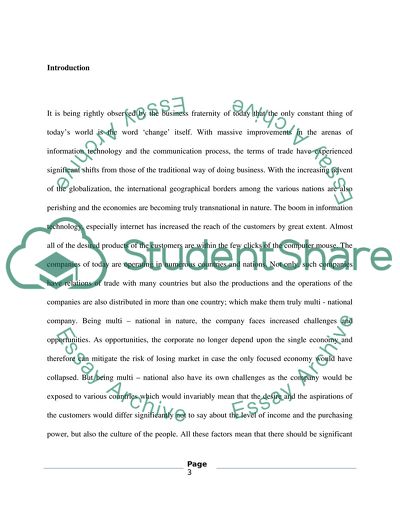 Extract of sample "The Problems Companies Face while Becoming Multinational"

Download file to see previous pages Almost all of the desired products of the customers are within the few clicks of the computer mouse. The companies of today are operating in numerous countries and nations. Not only, such companies have relations of trade with many countries but also the productions and the operations of the companies are also distributed in more than one country; which makes them truly multinational company. Being multinational in nature, the company faces increased challenges and opportunities. As opportunities, the corporate no longer depend upon the single economy and therefore can mitigate the risk of losing the market in case the only focused economy would have collapsed. But being multinational also have its own challenges as the company would be exposed to various countries which would invariably mean that the desire and the aspirations of the customers would differ significantly not to say about the level of income and the purchasing power, but also the culture of the people. All these factors mean that there should be significant and honest try for the companies to be able to connect itself with the populace of the counties. This calls for increased concentration towards the communication strategies of the companies. Among the various methods of communication, public relations hold the utmost importance.
Previously known as the British Petroleum Plc, BP is one of the largest companies in the world. The company is based at Westminster of England is one of the most efficient energy producers of the world. Founded in the year of 1909 and has been into the into the industry for more than 100 years now, the company has glorious past. BP is listed with the London Stock Exchange and is one of the major constituents of the FTSE 100 Index. The company is believed to be the largest private sector energy company of the world (after the merger of British Petroleum, Amoco and ARCO) and is also one of the important members of the “supermajor” of the vertically integrated oil, petroleum, and natural gas companies. ...Download file to see next pagesRead More
Share:
Cite this document
(The Problems Companies Face while Becoming Multinational Research Paper, n.d.)
The Problems Companies Face while Becoming Multinational Research Paper. Retrieved from https://studentshare.org/marketing/1731922-create-pr-strategy-and-plan-for-an-organisation-using-the-briefs-from-the-first-assessment-and-your-own-research

CHECK THESE SAMPLES OF The Problems Companies Face while Becoming Multinational

Culture refers to a set of gained knowledge that some individuals may employ to make meaning of experiences towards generating a unique set of behavior. Different business establishments engage diverse cultures in their setups. These cultures are necessary for guiding the entire organization towards a common objective, by promoting a uniform way of thinking and acting. In other words, an organization prevents the subjectivity of decisions and behaviors in an organization, which promotes uniformity and team working spirit. On the other hand, countries will have different cultures that organizations have to respect, which are inherent in the views and values of such a country. A multinational company setting its operations in the US...
10 Pages(2500 words)Research Paper

...?Dyn?amics of multinatio?nal companies Dyn?amics of multinatio?nal companies Introduction Over the years, foreign direct investment (FDI) has become quite a common means for countries to move capital flows from one country to the other. Foreign direct investment simply refers to a situation where a business entity for a particular country invests in an income-generating asset in another country with a hope of return on the investment. Foreign direct investment has its benefits to the foreign investor, the home country, and to the host country (Froot 1993, 60). However, it should be noted that the benefits that come about as a result of FDI can only be possible if all the three parties follow the right regulations, and the ethical ways...
5 Pages(1250 words)Essay

... (Teagarden, Von Glinow, 1997). HRM policies and practices are becoming crucial because they serve as mechanisms for coordination and control of international operations. HR systems help to shape organizational culture. On the other hand, it has also been argued that HRM serves as a deterrent when MNCs try to implement global strategies (Adler, Bartholomew, 1992). This is primarily due to the complexities faced in employing and managing people from disparate national and cultural backgrounds. A company is an organization composed of many differentiated practices. Within the same subsidiary, some management practices might follow the parent company ones, while others may stick to the practices of the host country. A crucial issue...
16 Pages(4000 words)Research Paper

This is the same in the case of employee retention. However it is very difficult for any organisation to take the necessary steps to retain its workforce and ensure that they remain loyal and engaged, and when this has to be carried out by an organisation with many different cultural dimensions the strategies that need to be adopted become even more difficult and complex.
The author believes that through this study, she will be able to gain sufficient information on the specific steps that can be taken by a transnational organisations with regard to managing and retaining employees while remaining profitable and ensuring that they remain loyal and engaged and highly productive, thus making the organisation even more profitabl...
10 Pages(2500 words)Essay

The Structural Adjustment Programme (SAP) is the prescription of World Bank

and IMF for the woes of developing countries in the post second world war era.

Intense debate is happening across the globe particularly after the catastrophic

discontent unleashed against these measures (Totten, pars. 1-8). On the other hand

and projected as the success of SAP. Though these programmes are in existence since

...﻿Multinational Companies In my analysis of General Electric, an American based Multinational Corporation and Samsung, a South Korean based Multinational Corporation, I found quite a few similarities as well as differences between the two giant companies. A noticeable similarity between the two companies is that both give high importance to their employees. Both the companies place high value in their people. As stated in (Samsung, 2012), a company is its people. This shows the significance which the Korean based company attaches with its people. Similarly, according to (GE, 2012), GE’s people are its greatest asset. This highlights the worth of employees in GE. The two companies equally believe in being socially, ethically as well...
2 Pages(500 words)Essay

...﻿Introduction The global labour market dynamics largely affect human resources in multinational organizations. Dual-career couples are partners who occupy positions that require high commitment for the success of the organization. The two partners pursue employment while maintaining a family unit together. They have responsibilities that demand a great deal of their time even though they are exposed to opportunities for a stable economic welfare. Greater responsibilities and time spent apart is especially when the two partners work for multinational companies in different countries. Contemporary organizations are offering job opportunities for women than it were before and hence there are an increasing number of dual-career couples. Apart...
9 Pages(2250 words)Term Paper

The political risk in these countries has led to deteriorating financial condition and unavailability of credit. This scenario has brought forward payment risks for multinational companies which are operating in Mthe middle East and North African region. The instability in MENA has created disruption in the oil industry and boosted the prices of petrochemical products. The risk of disorder in those countries has harmfully affected the supply chain and energy production companies (Dun & Bradstreet Limited, 2011).
The uprising in Tunisia has increased the business risks. During the protests, many business enterprises had shut down their operations. The retailing businesses were affected by raiding and the tourism industry had...
12 Pages(3000 words)Dissertation
sponsored ads
Save Your Time for More Important Things
Let us write or edit the research paper on your topic "The Problems Companies Face while Becoming Multinational" with a personal 20% discount.
GRAB THE BEST PAPER

Let us find you another Research Paper on topic The Problems Companies Face while Becoming Multinational for FREE!