Comments (0)
Add to wishlist Delete from wishlist
Cite this document
Summary
The paper "Macro and Competitive Environment of the Non-Alcoholic Redbull Cola in the UK Market" highlights that Redbull Cola needs to adopt innovatively and mix market strategy for its soft drinks to meet the challenges from its rival companies in the global market…
Download full paper File format: .doc, available for editing
HIDE THIS PAPERGRAB THE BEST PAPER97.9% of users find it useful 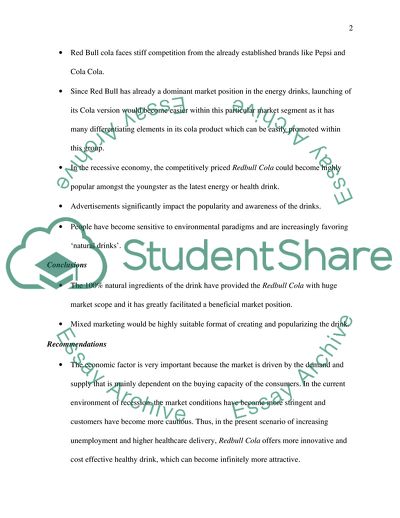 Download file to see previous pages The study was, therefore, primarily focused on the following factors:
• The benefits of using Redbull Cola drinks.
• The impact of major macro factors vis-à-vis economic; demographic; socio-cultural; new environmental compulsion and nature; and technology on the market strategy of Redbull Cola drink.
• Identify major competitors.
• Identify the segment that would help create a market position for the UK market.
• Most effective means of creating awareness of the soft drink in a new market and popularizing it amongst the people.
• Red Bull cola faces stiff competition from the already established brands like Pepsi and Cola-Cola.
• Since Red Bull has already a dominant market position in the energy drinks, launching of its Cola version would become easier within this particular market segment as it has many differentiating elements in its cola product which can be easily promoted within this group.
• In the recessive economy, the competitively priced Redbull Cola could become highly popular amongst the youngster as the latest energy or health drink.
• Advertisements significantly impact the popularity and awareness of the drinks.
• People have become sensitive to environmental paradigms and are increasingly favoring ‘natural drinks’.
• The 100% natural ingredients of the drink have provided the Redbull Cola with huge market scope and it has greatly facilitated a beneficial market position.
• Mixed marketing would be a highly suitable format for creating and popularizing the drink.
Recommendations• The economic factor is very important because the market is driven by the demand and supply that is mainly dependent on the buying capacity of the consumers. In the current environment of recession, the market conditions have become more stringent and customers have become more cautious. Thus, in the present scenario of increasing unemployment and higher healthcare delivery, Redbull Cola offers a more innovative and cost-effective healthy drink, which can become infinitely more attractive. ...Download file to see next pages Read More
Share:
Tags
Cite this document
(Macro and Competitive Environment of the Non-Alcoholic Redbull Cola in Case Study, n.d.)
Macro and Competitive Environment of the Non-Alcoholic Redbull Cola in Case Study. Retrieved from https://studentshare.org/marketing/1729392-consultancy-report

“Macro and Competitive Environment of the Non-Alcoholic Redbull Cola in Case Study”, n.d. https://studentshare.org/marketing/1729392-consultancy-report.
Comments (0)
Click to create a comment or rate a document

Beverages: Alcoholic and Non-alcoholic Trends and Patterns in Hospitality

According to the research findings the Ancient Greek word ‘gastronomy’ is literally referred to laws of regulating the stomach. Gastronomy is the art of eating and its covers a vast horizon including study of food and cooking culture. Sciences related to food, nutrition facts, and cooking techniques also lies in the field of gastronomy. Introducing the innovative tastes, research on cooking and food, and understanding the preparation of food are also elements of gastronomy. Further the biological and chemical knowledge regarding the food is called gastronomy. The concept or theory of hospitality is originated from the norms and customs of ancient people to deal with a friend, guest, stranger, or a traveler with an amiable, affecti...
10 Pages (2500 words) Essay

...? UK Buss Market – Competitive Environment Contents Introduction 3 UK Bus Market – Background 3 Analysis of the Market Using S-C-P Model 4 Structure of UK Bus Market 4 Conduct of the Firms in the UK Bus Market 5 Performance of the Firms in the UK Bus Market 5 The Firms’ Behaviour 6 Reasoning behind Competition Commission’s Concerns, Actions and Decisions 6 Conclusion 7 References 8 Introduction Competition plays a very important role in the growth of a market and economy. Increasing competition is the most effective way of enhancing the welfare of the consumers. Competition breeds entrepreneurship, creativity, innovation and increases the efficiencies of the firms. It also results in low prices along with better services and products...
5 Pages (1250 words) Essay

These factors influences a business through causing some major influences on it like competition, changing the interest rates payable by a business on loans and other debts that it, owes, changes in the cultural tastes and preferences of the society, as well as a change in the government regulations, regarding the conduct of such businesses (Porter, 1998 p33). Thus, the external macro environment of a business refers to all the political, social, economic and the technological events, occurrences and trends, which impacts on a business or its market. These factors affect the business indirectly, but the business can only respond to these factors through adopting changes and strategies that will be favorable for its operation, ami...
10 Pages (2500 words) Essay

The Competitive Environment in the Market

...The Five Forces Analysis helps the marketer to contrast a competitive environment and comprises: supplier power, buyer power, competitive rivalry, threat of substitutes, and threat of new entrants. These five forces are also an acronym of the Porter's theory of generic strategy, and so the answers here would cover questions 'a' and 'b' of this paper. The following analysis/report is therefore applicable to Morrison, as per the case, with reference to the diagram below. Fig.1 The five forces model1 Supplier Power This aspect of the five forces basically assesses how easy it is for Morrisons suppliers to drive up prices in the market environment. The ability of a supplier to drive up prices would depend on the extent to which Morrisons...
9 Pages (2250 words) Term Paper

... [Supervisor's Macro Environment Pepsi Pepsi remains bullish in India with its plan to invest about Rs. 400 crores. Pepsi established seven new PET bottling plants bythe year 2000, which supplemented the previous eight plants in Mumbai and Calcutta. Pepsi also added 100,000 outlets every year to its previous network of around 600,000 throughout the country in 2000. The company will test-market and launch its drinkingwater, Aquafina, in Mumbai before taking it to othercenters. Aquafina will be sold in 750-ml bottles for Rs 10. Following China, India is the second-most populous country in the world that makes it very important market for world's leading beverage company, Pepsi. The major factors of social and political organization within...
3 Pages (750 words) Case Study

...﻿Market of alcoholic and non alcoholic products Table of Contents Market of alcoholic and non alcoholic products 1 PART A: Market Research 2 Industry Analysis 2 Market growth & trend 2 Key Competitors 3 PART B: Marketing Strategy 4 Marketing Mix 4 International expansion strategy 5 6 References 7 PART A: Market Research Industry Analysis The changing needs and demands of the customers have forced organizations to develop new products. This phenomenon is mainly carried out to maintain the current base of customers and also attracting new ones. Therefore in this turbulent business environment success of an organization hugely depends upon the capabilities of a company to exploit new opportunities of the market place. However in order...
3 Pages (750 words) Research Paper

...Macro Environment Assignment of the of the Natural resources and availability The new technology that is to be developed for prevention of car accidents and prevent death due to car accidents involves the use of sensors that is likely to be attached to the airbags. The purpose of attaching the sensor to the airbag is to ensure that in case of accidents calls may be automatically sent to the 911 without anyone having to dial the 911 no. separately. The aim of the technology is to reduce death rates caused by accidents. The technology basically involves use of different supporting technology. Since the device will be using sensors to detect impact it will basically involve the use of transistors or other semiconductor components...
5 Pages (1250 words) Assignment

...Target group of Red Bull in UK By Red Bull in UK developed new strategies in marketing their products due to the pressure that was put on the company due to stiff competition from companies such a Coca Cola. In the strategies of the company was avoiding mainstream advertising, as this was not reaching the target group for its products. The company however decided to focus on grass root product promotion that would allow the products use targeted group (RED BULL GMBH v POTTERS, 2013). The consumers that were targeted through the grass root promotion were those that visited trendy nightclubs. The products also targeted the credibility of those that were involved in interaction with the young target audience (RED BULL GMBH v...
1 Pages (250 words) Coursework
sponsored ads
Save Your Time for More Important Things
Let us write or edit the case study on your topic "Macro and Competitive Environment of the Non-Alcoholic Redbull Cola in the UK Market" with a personal 20% discount.
GRAB THE BEST PAPER

Let us find you another Case Study on topic Macro and Competitive Environment of the Non-Alcoholic Redbull Cola in the UK Market for FREE!