Comments (0)
Add to wishlist Delete from wishlist
Cite this document
Summary
This research proposal describes shareholder value creation by acquiring firms in emerging markets. This paper demonstrates a burning topic that is related to the analysis of current valuation techniques with respect to fair value measurements in line with SFAS 157. This paper demonstrates objectives and proposed methodologies…
Download full paper File format: .doc, available for editing
HIDE THIS PAPERGRAB THE BEST PAPER96.8% of users find it useful 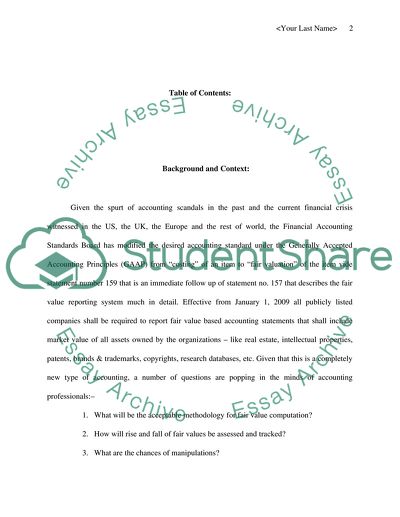 Download file to see previous pages Effective from January 1, 2009, all publicly listed companies shall be required to report fair value based accounting statements that shall include the market value of all assets owned by the organizations – like real estate, intellectual properties, patents, brands & trademarks, copyrights, research databases, etc. Given that this is a completely new type of accounting, a number of questions are popping in the minds of accounting professionals. Given that this is an entirely new governance system, a number of experts are trying to answer such questions or raise more questions. The author proposes to undertake a broad educational perspective of this subject by assessing the current company valuation techniques and then try to evaluate if these techniques are feasible to carry out fair value measurements of company assets. [Mard, Michael J. 2008] Fair value measurements have been in discussions for many years but post the current Sub-Prime crisis the same is in the process of getting mandatory for publicly listed organizations and a number of private companies as well. This new requirement is expected to trigger a number of researches in the industry trying to answer the questions that are raised by practicing accountants of the industry. The author proposes to contribute by trying to answer the following Research Questions pertaining to the proposed research:
In an interview with Mr. Robert H Herz, FASB Chairman, he emphasized that the SFAS 157 is not the first introduction of the concept of Fair Value Measurements. Fair Value has appeared in many standards in the last few decades and hence is not a new concept. However, a consolidated standard of fair value from the GAAP perspective was needed and SFAS 157 was introduced to fulfill this criterion. The emphasis of fair value is to provide accurate information to those individuals that study financial statements and then take decisions on investments & credits based on such statements. Fair value is not essentially a replacement of historical costs but is an additional projection to the users of the accounting statements about the current market valuation of assets whereby cash assets and cash equivalents should be depicted separately.  ...Download file to see next pages Read More
Share:
Tags
Cite this document
(Shareholder Value Creation by Acquiring Firms in Emerging Markets Research Proposal, n.d.)
Shareholder Value Creation by Acquiring Firms in Emerging Markets Research Proposal. Retrieved from https://studentshare.org/marketing/1722067-anything-in-corporate-finance-field

Focus on shareholder value started gaining prominence in the 1980s and by the start of 21st century had become a key element in corporate governance in the US, UK, and most of leading European nations like Germany, France and Sweden; so much so that the OECD, in their document released in 1999, emphasized that firms be run first and foremost in the interest of shareholders. They further reinforced this thought in their 2004 release of OECD principles of corporate governance (OECD 2004). As the fad of focus on shareholder value began spreading, the understanding of the concept seemed to have started to erode somewhat as many executives began to focus on quarterly earnings as a key driver of their stock prices. The concept of shareh...
7 Pages (1750 words) Term Paper

... Emerging Markets Emerging markets are becoming the fastest drivers of global development. These markets are expected to grow twice or thrice the number of developed countries like the United States. The public investor continues to underweight these developing markets in their collections. Corporate profits seem to grow rapidly when there is a higher economic growth. One of the reasons why developed markets like the U.S have been ranked high is because of the development of markets outside the country. Some nations are borrowing a leaf from the U.S and are performing well as emerging markets. They include Brazil, Indonesia, Chile, Israel, Egypt, Turkey, Pakistan, Russia, Peru, and Korea. In this context, Turkey and Peru are the markets...
4 Pages (1000 words) Essay

...Managing Shareholder Value 0 Introduction There are so many multiples being dealt with the broad spectrum of financial management. However when thequestion of finding out whether any real shareholder value has been created arises , the total system fumbles and it may not really be possible for one to find out the real status with regard to the creation of shareholder value. The standard models dealing with the internal financial management of any firm mostly uses the cash flow analysis for review and decisions on capital expenditures. Similarly the system uses the base of earnings and other multiples like EBITDA or rate of return for evaluating and reporting on the financial performance of the firms to maintain the relationship...
8 Pages (2000 words) Essay

Some strategic decisions (entering new markets, increasing sales capacity, etc.) need shareholder approval as these may require capital investments that affect profits, while most tactical marketing decisions (like advertisements, promotional campaigns, etc.) do not.
Since shareholders are after increasing the value of their investment (Shareholder Value or SHV), they want higher profits. Since profits result from how much the business sells and spends to generate those sales, it seems logical that SHV is a good framework for evaluating marketing decisions. This paper in effect analyzes the reasoning that making good and correct marketing decisions would increase profits and SHV.
Drucker (1955, p. 36) was among the firs...
8 Pages (2000 words) Essay

...EMERGING MARKETS Comparing India and China over the Last 20 Years In Terms Of Their Economic and Financial Reforms From research, both China and India`s governments decided to mobilize domestic savings and channel them into industrial development after taking power. Government possession and involvement was the means to that end (Allen 2005). The planners in China eradicated private possessions and institutions when they took over the financial system. Therefore, recreating financial markets and market-based institutions has been a work in progress. On the other hand, the leaders in India chose a mixed economy after independence from Britain. Markets proceeded to operate in conjunction with public institutions, but with ever-increasing...
8 Pages (2000 words) Essay

... expense of other stakeholders like customers and employees hence encourage more investors. Arguably, therefore, shareholder value plays a critical role as it contributes significantly to the management of the company hence promoting international business. It thus means that the management should have the shareholders in mind during their decision making process as the more the shareholder value, the better it is for the management and the firm at large (Keay, 2012, p. 13). Increasing shareholder value should be initiated by increased earnings or profits thus the decision making process by management is vital. Capital market is a global phenomenon, hence investors can shift their investments to better yielding companies, that are foreign...
4 Pages (1000 words) Essay

Service Affiliation Service My experience of poor service was in a fast food restaurant. After ordering a bag of chips, the attendant provided with a cold bag of chips. The situation was made worse since the attendant declined to take back the chips or refund me. In this regards, there are numerous practices that could have been done differently. Firstly, the attendant should ensure meals provided to the customers are hot. In addition, the waiter may enquire from the customer on how they wish their chips to be served. It is also required that a business enterprise admit when they are in fault. Upon complaining, the attendant would have provided me with another bag of chips or refund me.
Evenson (2011) is of the assumption tha...
1 Pages (250 words) Essay
sponsored ads
Save Your Time for More Important Things
Let us write or edit the research proposal on your topic "Shareholder Value Creation by Acquiring Firms in Emerging Markets" with a personal 20% discount.
GRAB THE BEST PAPER

Let us find you another Research Proposal on topic Shareholder Value Creation by Acquiring Firms in Emerging Markets for FREE!