Comments (0)
Add to wishlistDelete from wishlist
Cite this document
Summary
Team effectiveness can broadly be defined as being the capacity for a team to be able to successfully work together and eventually attain the various objectives and goals that have been set for them by the organization. Effective teams are evidenced by the fact that its members…
Download full paperFile format: .doc, available for editing
HIDE THIS PAPERGRAB THE BEST PAPER96.4% of users find it useful 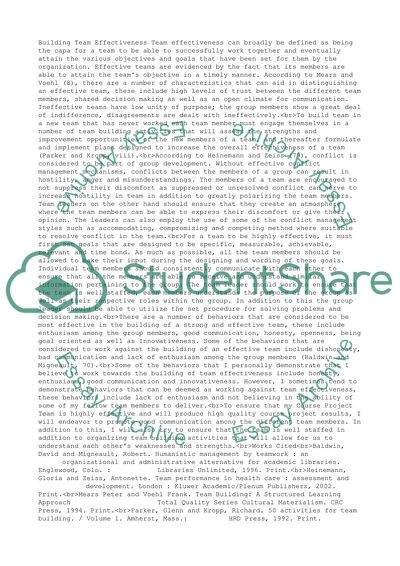 Building Team Effectiveness Team effectiveness can broadly be defined as being the capa for a team to be able to successfully work together and eventually attain the various objectives and goals that have been set for them by the organization. Effective teams are evidenced by the fact that its members are able to attain the team’s objective in a timely manner. According to Mears and Voehl (8), there are a number of characteristics that can aid in distinguishing an effective team, these include high levels of trust between the different team members, shared decision making as well as an open climate for communication. Ineffective teams have low unity of purpose; the group members show a great deal of indifference, disagreements are dealt with ineffectively.
To build team in a new team that has never worked each team member must engage themselves in a number of team building activities that will assess the strengths and improvement opportunities of the new members of a team, and thereafter formulate and implement plans designed to increase the overall effectiveness of a team (Parker and Kropp, viii).
According to Heinemann and Zeiss (79), conflict is considered to be part of group development. Without effective conflict management mechanisms, conflicts between the members of a group can result in hostility, anger and misunderstandings. The members of a team are encouraged to not suppress their discomfort as suppressed or unresolved conflict can serve to increase hostility in team in addition to greatly polarizing the team members. Team leaders on the other hand should ensure that they create an atmosphere where the team members can be able to express their discomfort or give their opinion. The leaders can also employ the use of some of the conflict management styles such as accommodating, compromising and competing method where suitable to resolve conflict in the team.
For a team to be highly effective, it must first set goals that are designed to be specific, measurable, achievable, relevant and time bond. As much as possible, all the team members should be allowed to make their input during the designing and wording of these goals. Individual team members should consistently communicate with each other to ensure that all the members are able to receive and understand similar information pertaining to the group. The team leader should work to ensure that the team is well staffed, each members understands the purpose of the group as well as their respective roles within the group. In addition to this the group leader should be able to utilize the set procedure for solving problems and decision making.
There are a number of behaviors that are considered to be most effective in the building of a strong and effective team, these include enthusiasm among the group members, good communication, honesty, openness, being goal oriented as well as Innovativeness. Some of the behaviors that are considered to work against the building of an effective team include dishonesty, bad communication and lack of enthusiasm among the group members (Baldwin and Migneault, 70).
Some of the behaviors that I personally demonstrate that I believe to work towards the building of team effectiveness include honesty, enthusiasm, good communication and innovativeness. However, I sometimes tend to demonstrate behaviors that can be deemed as working against team effectiveness, these behaviors include lack of enthusiasm and not believing in the ability of some of my fellow team members to deliver.
To ensure that my Course Project Team is highly effective and will produce high quality course project results, I will endeavor to promote good communication among the different team members. In addition to this, I will also try to ensure that the team is well staffed in addition to organizing team building activities that will allow for us to understand each other’s weaknesses and strengths.
Works Cited
Baldwin, David and Migneault, Robert. Humanistic management by teamwork : an organizational and administrative alternative for academic libraries. Englewood, Colo. : Libraries Unlimited, 1996. Print.
Heinemann, Gloria and Zeiss, Antonette. Team performance in health care : assessment and development. London : Kluwer Academic/Plenum Publishers, 2002. Print.
Mears Peter and Voehl Frank. Team Building: A Structured Learning Approach Total Quality Series Cultural Materialism. CRC Press, 1994. Print.
Parker, Glenn and Kropp, Richard. 50 activities for team building. / Volume 1. Amherst, Mass.: HRD Press, 1992. Print. Read More
Share:
Tags
Cite this document
(“Build team effectiveness Essay Example | Topics and Well Written Essays - 500 words”, n.d.)
Build team effectiveness Essay Example | Topics and Well Written Essays - 500 words. Retrieved from https://studentshare.org/management/1655674-build-team-effectiveness

How to build a successful team

...?How To Build A Good Team that Works through an Common vision and Reach a Common Goal Building a team is a complex process that involves a lot of factors. The core factors of building a team involve the qualities of the leader leading the team, the composition of the team and dynamics of the people within the team. To get a clearer picture of how to build a strong team that works through a common vision to achieve a common goal, let us discuss the different elements or factors that are needed to build a strong team. 1....
5 Pages(1250 words)Essay

...leaders (Appelbaum & Valero, 2007). Watkins (2004) maintained that, to accelerate the transition and build momentum, the new leader must have the ability to engage and influence many individuals throughout the organization “using vision, expertise and drive” (p. 16). Unlike well seasoned leaders who may have some understanding on what works in teams or how to handle various challenges that arise in newer teams that they are faced with, new leaders lack the experience of having to deal with such challenges. Most only have theoretical knowledge. Past literature have depicted transformational leadership as the most effective in enabling team performance and...
16 Pages(4000 words)Research Paper

...performance should be the objective of all teams. Synergy occurs when common people align their objectives (Beare, et al., 2013). Good communication is also an important factor that leads to team success. Communication in the workplace is of utter importance towards achieving the goals of a company. Managers that want for employees to work together as a cohesive team unit must build a bond of trust with the workers by effectively communicating with them. Teamwork without communication does not work. To effectively guide the actions of a team its leader has to maintain the lines of communication open at all times....
4 Pages(1000 words)Essay

...such as communication, and leadership, as well as few models of behavior in team such as Adair-Action-Centered Leadership, Belbin Roles, Tuckman’s Stages of Team Development, and Hofstede’s cultural dimensions. Building and maintaining team effectiveness is essential for the accomplishment of assigned task. At the beginning of our project, all of our group members were unfamiliar to each other. It is because the groups were to be made as per instructor’s criteria and we were not allowed to choose our own group mates. We did not know how we are going to work together since we are not aware of the behavior and attitudes of each other. Prior to reflecting...
7 Pages(1750 words)Essay

...Team Effectiveness Team effectiveness is a complex notion which depends upon different strategies including scheduling and decision-making. If a team is to be successful and perform effectively there must be a spirit of unity and co-operation, which can be achieved through scheduling and decision-making. It is important because team members should be aware of the tasks they perform, should be involved in decision-making process and be aware of the terms. Usually, the most consistently successful teams comprise a range of roles undertaken by various members. Decision-making has a great influence on...
2 Pages(500 words)Essay

.... Most organizations arrange for company team building days whereby employees get a chance to mingle and bond with each other in an informal setting. In this way work relationships are strengthened. Of course leadership plays an important role in facilitating team effectiveness. A leader has the onus of initiating smooth flow of work in the team. By delegating work evenly among team members and linking each task to the overall outcome so that all members feel included and needed in the team. Further doing this eliminates laziness and over reliance on some members of the team. It also reduces the...
5 Pages(1250 words)Essay

... Build Team Effectiveness Team effectiveness is the act of bringing people together to work effectively towards a common goal of the team. Effectiveness of the team requires loyalty to one another and has a high degree of confidence and trusts one another. Every member has an opportunity to develop their potentials and communicate fully and frankly. Group activities occur in a supportive atmosphere and group values and goals express relevant values and goals of members. Effective teams usually have a clear unity of purpose and are self-conscious about its own operations. Another characteristic of effective team is that it has clear and demanding performance goals and the atmosphere tends to be informal, comfortable (DeRuvo 5-7... ). In...
2 Pages(500 words)Research Paper

...There are different factors that are considered when building a team especially in the organization. According to Robbins (1993), activities that areconsidered in team building include goal setting, development of interpersonal relationships among members, role analysis to clarify each member’s role and responsibilities and team processes. Essentially, team building attempts to utilise high interaction among members to increase openness and trust. As such, this paper seeks to discuss the factors that can be taken into consideration when selecting a six member team for a high-stakes, high-pressure project...
4 Pages(1000 words)Essay
sponsored ads
Save Your Time for More Important Things
Let us write or edit the essay on your topic "Build team effectiveness" with a personal 20% discount.
GRAB THE BEST PAPER

Let us find you another Essay on topic Build team effectiveness for FREE!