Comments (0)
Add to wishlistDelete from wishlist
Cite this document
Summary
The analysis I did on my team shows a good teamwork and its success is driven by organizational behavior concepts such as listening, communicating, and collaborating. Although there were times when some of us did not make to come to the meetings, we were able to understand and…
Download full paperFile format: .doc, available for editing
HIDE THIS PAPERGRAB THE BEST PAPER94.7% of users find it useful 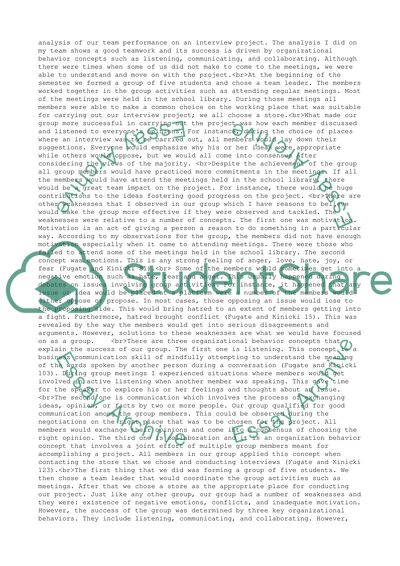 analysis of our team performance on an interview project. The analysis I did on my team shows a good teamwork and its success is driven by organizational behavior concepts such as listening, communicating, and collaborating. Although there were times when some of us did not make to come to the meetings, we were able to understand and move on with the project.
At the beginning of the semester we formed a group of five students and chose a team leader. The members worked together in the group activities such as attending regular meetings. Most of the meetings were held in the school library. During those meetings all members were able to make a common choice on the working place that was suitable for carrying out our interview project; we all choose a store.
What made our group more successful in carrying out the project was how each member discussed and listened to everyone’s opinions. For instance, during the choice of places where an interview was to be carried out, all members would lay down their suggestions. Everyone would emphasize why his or her ideas were appropriate while others would oppose, but we would all come into consensus after considering the views of the majority.
Despite the achievement of the group all group members would have practiced more commitments in the meetings. If all the members would have attend the meetings held in the school library, there would be a great team impact on the project. For instance, there would be huge contributions to the ideas fostering good progress on the project.
There are other weaknesses that I observed in our group which I have reasons to believe would make the group more effective if they were observed and tackled. The weaknesses were relative to a number of concepts. The first one was motivation. Motivation is an act of giving a person a reason to do something in a particular way. According to my observations for the group, the members did not have enough motivation especially when it came to attending meetings. There were those who failed to attend some of the meetings held in the school library. The second concept was emotions. This is any strong feeling of anger, love, hate, joy, or fear (Fugate and Kinicki 81).
Some of the members would sometimes get into a negative emotion such as hate, fear and anger. This usually happened during debates on issues involving group activities. For instance, it happened that any issue or idea would be placed at a platform were a number of the members would either oppose or propose. In most cases, those opposing an issue would lose to the proposing side. This would bring hatred to an extent of members getting into a fight. Furthermore, hatred brought conflict (Fugate and Kinicki 15). This was revealed by the way the members would get into serious disagreements and arguments. However, solutions to these weaknesses are what we would have focused on as a group.
There are three organizational behavior concepts that explain the success of our group. The first one is listening. This concept is a business communication skill of mindfully attempting to understand the meaning of the words spoken by another person during a conversation (Fugate and Kinicki 103). During group meetings I experienced situations where members would get involved in active listening when another member was speaking. This gave time for the speaker to explore his or her feelings and thoughts about an issue.
The second one is communication which involves the process of exchanging ideas, opinion, or facts by two or more people. Our group qualified for good communication among the group members. This could be observed during the negotiations on the right place that was to be chosen for the project. All members would exchange their opinions and come into a consensus of choosing the right opinion. The third one is collaboration and it is an organization behavior concept that involves a joint effort of multiple group members meant for accomplishing a project. All members in our group applied this concept when contacting the store that we chose and conducting interviews (Fugate and Kinicki 123).
The first thing that we did was forming a group of five students. We then chose a team leader that would coordinate the group activities such as meetings. After that we chose a store as the appropriate place for conducting our project. Just like any other group, our group had a number of weaknesses and they were: existence of negative emotions, conflicts, and inadequate motivation. However, the success of the group was determined by three key organizational behaviors. They include listening, communicating, and collaborating. However, our group members would have been more committed in attending meetings for improvement of the team output to the project.
Based on this analysis, I learnt a number of things about myself, especially, when participating in a group. For instance, I would get into an emotion of anger due to the number of absentees who did not attend meetings. Absenteeism implied that there was a lot of work being done by the present members where I was included. However, I also learnt that as a group member, it was you duty to report in advance on you absenteeism. This would create more understandings for the rest of you colleagues and leave them satisfied.
As an individual I would introduce a fine strategy in a group, meant to charge the group members that would appear late in the meetings. This would act as a motivation for all the group members. However, I would maintain the organization behavior concepts of good communication, collaboration, and listening.
Work cited
Fugate, Mel and Kinicki, Angelo. Organizational Behavior: Key Concepts, Skills & Best Practices. New York: McGraw-Hill/Irwin, 2011. Print. Read More
Share:
Tags
Cite this document
(“Organizational behavior Analysis Essay Example | Topics and Well Written Essays - 500 words”, n.d.)
Organizational behavior Analysis Essay Example | Topics and Well Written Essays - 500 words. Retrieved from https://studentshare.org/management/1641835-organizational-behavior-analysis

...and hence use the information to predict the behaviors of the competitors. This analysis helps an organization to understand; competitors plans and objectives, reaction of competitors towards their actions, how to influence the behavior of the competitor to the advantage of the firm and close competitors. The analysis should also assist the firm determine the strategies, objectives, capabilities and assumptions of the competitors (Smith, and Conners, 2009, pp 223-240). For the effectiveness of any strategy developed by an organization, it has to be planned for. For this reason, the strategic planning process becomes essential for the effectiveness of any strategy. There...
10 Pages(2500 words)Coursework

...Organizational Behavior Analysis Proposal for McDonalds The organization not living up to its d set of vision/purpose/mission/values McDonald is not living up to its stated set of vision and values. The company allegedly uses unethical methods to make increased profits at the expense of customers’ health and social condition of the employees. McDonald has also been criticized for targeting children with their advertisements by exposing them to unhealthy eating habits. This has contributed to the high levels of obesity and other health complications. The company has also been accused of passing their French fries as vegetarian, whereas they add beef broth. The company has failed to...
2 Pages(500 words)Essay

Let us find you another Essay on topic Organizational behavior Analysis for FREE!