Comments (0)
Add to wishlistDelete from wishlist
Cite this document
Summary
Characteristics of a level 5 leader are very prominent in his personality and management.
The characteristics attached to a Level 5…
Download full paperFile format: .doc, available for editing
HIDE THIS PAPERGRAB THE BEST PAPER96.5% of users find it useful 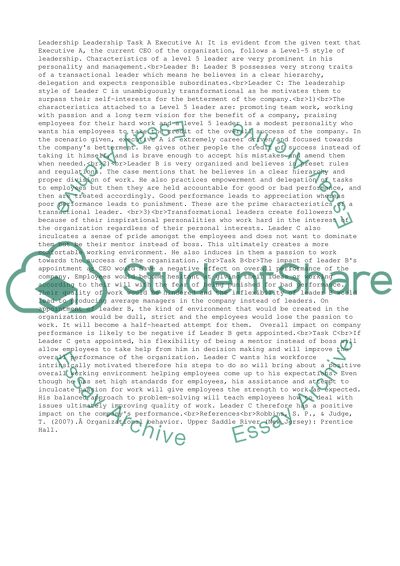 Leadership Leadership Task A Executive A: It is evident from the given text that Executive A, the current CEO of the organization, follows a Level-5 style of leadership. Characteristics of a level 5 leader are very prominent in his personality and management.
Leader B: Leader B possesses very strong traits of a transactional leader which means he believes in a clear hierarchy, delegation and expects responsible subordinates.
Leader C: The leadership style of Leader C is unambiguously transformational as he motivates them to surpass their self-interests for the betterment of the company.
1)
The characteristics attached to a Level 5 leader are: promoting team work, working with passion and a long term vision for the benefit of a company, praising employees for their hard work and a level 5 leader is a modest personality who wants his employees to take the credit of the overall success of the company. In the scenario given, executive A is extremely career driven and focused towards the company’s betterment. He gives other people the credit of success instead of taking it himself, and is brave enough to accept his mistakes and amend them when needed.
2)
Leader B is very organized and believes in preset rules and regulations. The case mentions that he believes in a clear hierarchy and proper division of work. He also practices empowerment and delegation of tasks to employees but then they are held accountable for good or bad performance, and then are treated accordingly. Good performance leads to appreciation whereas poor performance leads to punishment. These are the prime characteristics of a transactional leader.
3)
Transformational leaders create followers because of their inspirational personalities who work hard in the interest of the organization regardless of their personal interests. Leader C also inculcates a sense of pride amongst the employees and does not want to dominate them but be their mentor instead of boss. This ultimately creates a more comfortable working environment. He also induces in them a passion to work towards the success of the organization.
Task B
The impact of leader B’s appointment as CEO would have a negative effect on overall performance of the company. Employees would become hesitant at giving their ideas or working according to their will with the fear of being punished for bad performance. Their quality of work would be hindered and the inflexibility of leader B would lead to producing average managers in the company instead of leaders. On appointment of leader B, the kind of environment that would be created in the organization would be dull, strict and the employees would lose the passion to work. It will become a half-hearted attempt for them. Overall impact on company performance is likely to be negative if Leader B gets appointed.
Task C
If Leader C gets appointed, his flexibility of being a mentor instead of boss will allow employees to take help from him in decision making and will improve the overall performance of the organization. Leader C wants his workforce intrinsically motivated therefore his steps to do so will bring about a positive overall working environment helping employees come up to his expectations. Even though he has set high standards for employees, his assistance and attempt to inculcate passion for work will give employees the strength to work as expected. His balanced approach to problem-solving will teach employees how to deal with issues ultimately improving quality of work. Leader C therefore has a positive impact on the company’s performance.
References
Robbins, S. P., & Judge, T. (2007). Organizational behavior. Upper Saddle River (New Jersey): Prentice Hall. Read More
Share:
Tags
Cite this document
(“Leadership Essay Example | Topics and Well Written Essays - 500 words - 22”, n.d.)
Leadership Essay Example | Topics and Well Written Essays - 500 words - 22. Retrieved from https://studentshare.org/management/1592117-leadership

CHECK THESE SAMPLES OF Leadership

...?“Even without ‘great inherited talent’, a person could still become an effective leader”. Yes or No? Explain. Good leaders are made not born. If onehas the aspiration and determination, one can become an effective leader. Good leaders develop through a continuous process of self-evaluation, learning, training, and experience (Jago, 1982). One can be an effective leader even without the inherited talent. Leadership ability generally consists of learned skills that are developed throughout a leader’s career. The Great Man Theory, also known as Trait Theory, suggests that specific innate traits are assumed to distinguish effective leaders from other people (Fleishman, Zaccaro, & Mumford 1991). This is contested by Andersen...
4 Pages(1000 words)Essay

...? 21 October Q a) Leadership and management are two different terms, although they are often used interchangeably. Owing to the similarity of the nature of job, leadership is frequently confused with management. The fundamental factor that makes a difference between the leadership and management is authority. A leader has the authority to make independent decision, while a manager follows the decision of the senior. A leader is all in all while a manager is obliged to comply with the instructions of the senior. A leader establishes the target himself while a manager is not authorized to establish the target. Rest of the work of a leader and a manager is the same. Both plan and control the work of the subordinates. A leader is also... a...
8 Pages(2000 words)Assignment

...?Running Head: Leadership Leadership [Institute’s Leadership With the academia venturing into understanding how people live in societies and spend their lives, there are aspects of human endeavors that now form the crest of research studies. Psychology, for example, is the science dedicated to studying human behavior and its adaptation to different circumstances. On the other hand, there is marketing and business studies, which specifically study the psyche of individuals in organizations at various levels and examine the way they adapt to their surroundings. One of the foci of these varied discourses is the concept of leadership and the way it affects the efficacy of any organization. The reason for laying emphasis on this topic... is...
3 Pages(750 words)Research Paper

...? Number Leadership Number Leadership is the ability to lead a group of people or an organization. In essence, it involves the establishment of a clear vision, with a clear vivid picture of the destination, and a grasp of success and how to attain it. Secondly, the vision should be shared with others so that they can willingly follow (Northouse, 2009). Thirdly, the leader should provide the knowledge and methods needed to realize the vision and influence others to buy into the idea. As passion is contagious, the leader must communicate in a passionate and clear way. Consequently, the leader should coordinate and balance the conflicting interests in stakeholders and be able to think and act creatively in difficult situations... hostility....
5 Pages(1250 words)Essay

...? Leadership Introduction Introduction Leadership is the process of influencing people socially where one individual enlists the help of other people in the achievement of certain goals and objectives. It is also the mobilization of people in an organized manner in order to accomplish certain tasks. Scholars of leadership have devised various theories relating to the characteristics portrayed by various leaders (Goleman, 1998). A leader is a person to whom an organization bestows the responsibility of showing guidance to the rest of the employees or team members. They provide a sense of direction and guidance, which the rest follow to the latter in order for the organization to achieve its intended results. In essence, the major... ...
5 Pages(1250 words)Term Paper

...increasingly aware of the non-monetary rewards that companies can provide them. It is generally important that the job not only fulfills their economical needs, but their socio-emotional needs as well. This means a discussion of compensation and benefits should go beyond the concrete rewards of the job but also emphasize the aspects of the job that the employee will find intrinsically satisfying (Lester, Clair & Kickul, 2001) such as meaningful work, recognition, creative freedom and opportunities for personal growth. One of the initial perceptions of a new worker is the quality of leadership his new group has. If he looks up to the leader or manager directly above him as possessing most of the positive traits he has...
16 Pages(4000 words)Assignment

... creation is sustainable” (para.2). They pride themselves of having taught other companies which has sustained its growth with their 20 years of Global leadership in their area of expertise. Just what does it take for companies to achieve sustainable development? In motivating a reluctant CEO of leading his organization towards sustainable development, I could refer him to the article of Costanza (1999) wherein the author painted four visions of possible futures of society. Showing the reluctant CEO the “Mad Max” version of a bleak and dreary future of consistent deterioration due to neglect and irresponsible decisions and actions of people could push him towards positive action. Unto his hands rest the future of the organization... ’ lives....
15 Pages(3750 words)Research Paper

...Article critique Robert Allio in his article, Bad leaders: how they get that way and what to do about them make a distinction of how bad leadership traits can make a CEOs function wrongly and forced him/her to make an exit. The scrutiny of leaders has become more far more intense on account of Corporate Governance in the post Sarbenes-Oxley Rules environment. The moot point of the article as put by Allio is that why bad leaders are not recognized much before they bring damage to the organization, and how good people who lack the leadership trait but are excellent in delivering results are not identified much earlier. Bad Leader believes that employees working under him are basically lazy and the work,...
5 Pages(1250 words)Essay

...﻿Discuss the keys to effectively managing leadership development at each of the following levels: a first-line supervisor, a middle manager, a senior manager, and the President/CEO. The ability of an individual or an organization to influence workers working at different levels in a way that enables them to deliver the desired results is the aim of managing leadership development. Leaders working at different levels have to adopt different working techniques to influence their workers to achieve a collective aim. This is due to the fact that every level of work poses its unique challenges and the leader has to act in accordance to the requirement of circumstances to fulfill the desired goals. The duty of...
4 Pages(1000 words)Assignment
sponsored ads
Save Your Time for More Important Things
Let us write or edit the essay on your topic "Leadership" with a personal 20% discount.
GRAB THE BEST PAPER

Let us find you another Essay on topic Leadership for FREE!