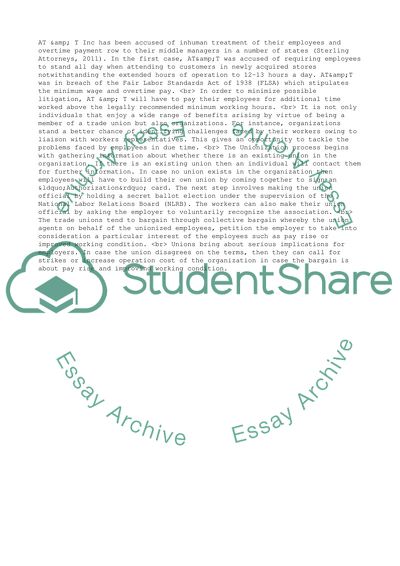 AT & T Inc has been accused of inhuman treatment of their employees and overtime payment row to their middle managers in a number of states (Sterling Attorneys, 2011). In the first case, AT&T was accused of requiring employees to stand all day when attending to customers in newly acquired stores notwithstanding the extended hours of operation to 12-13 hours a day. AT&T was in breach of the Fair Labor Standards Act of 1938 (FLSA) which stipulates the minimum wage and overtime pay.
In order to minimize possible litigation, AT & T will have to pay their employees for additional time worked above the legally recommended minimum working hours.
It is not only individuals that enjoy a wide range of benefits arising by virtue of being a member of a trade union but also organizations. For instance, organizations stand a better chance of identifying challenges faced by their workers owing to liaison with workers representatives. This gives an opportunity to tackle the problems faced by employees in due time.
The Unionization process begins with gathering information about whether there is an existing union in the organization. If there is an existing union then an individual will contact them for further information. In case no union exists in the organization then employees will have to build their own union by coming together to sign an “Authorization” card. The next step involves making the union official by holding a secret ballot election under the supervision of the National Labor Relations Board (NLRB). The workers can also make their union official by asking the employer to voluntarily recognize the association.
The trade unions tend to bargain through collective bargain whereby the union agents on behalf of the unionized employees, petition the employer to take into consideration a particular interest of the employees such as pay rise or improved working condition.
Unions bring about serious implications for employers. In case the union disagrees on the terms, then they can call for strikes or increase operation cost of the organization in case the bargain is about pay rise and improving working condition. Read More
Share:
Tags
Cite this document
(AT&T Company Information Essay Example | Topics and Well Written Essays - 489 words, n.d.)
AT&T Company Information Essay Example | Topics and Well Written Essays - 489 words. Retrieved from https://studentshare.org/management/1591930-human-capital-management-labor-laws-and-unions

The PCI DSS was created primarily created by Master card and Visa but later on, we're joined by three other premium credit card companies to form an independent council to counter online credit card fraud. The American Express, discover financial services and JCB were the three other companies that decided to take an active part in the stand taken by Visa and MasterCard. To understand the effectiveness of PCI DSS it becomes crucial to understand its core functionality and the reasons it was devised. The objective of PCI DSS is to build a secure network, protect cardholder data, maintain a vulnerability management program and implement strong access control measures (Wright .2008.Page11). In today’s time when security has bec...
6 Pages(1500 words)Assignment

Is it vital for Small medium enterprises to perform knowledge management tasks? Knowledge is been renowned as an economical contrivance for the organization's endurance. Small-medium enterprises often face knowledge management failures resulting in business loss. (Chan, Ivy, and Chao Chee-Kwong, 2008). The impact of the effective use of Information systems is essential for business professionals, managers are other knowledge workers. The information systems facilitate the busin...
7 Pages(1750 words)Case Study
sponsored ads
Save Your Time for More Important Things
Let us write or edit the essay on your topic "AT&T Company Information" with a personal 20% discount.
GRAB THE BEST PAPER

Let us find you another Essay on topic AT&T Company Information for FREE!