Comments (0)
Add to wishlistDelete from wishlist
Cite this document
Summary
The United States government assessment report has confirmed that the Syrian government did carry out a chemical attack on the opposition alliance along the suburban regions of Damascus in the early hours of August 21, 2013. The attacks were confirmed by several witnesses…
Download full paperFile format: .doc, available for editing
HIDE THIS PAPERGRAB THE BEST PAPER98.1% of users find it useful 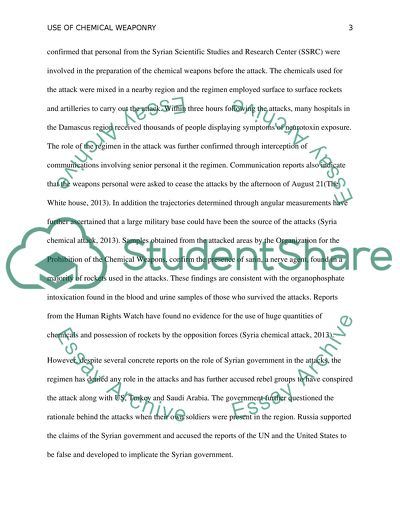 The Use of Chemical Weaponry by the Syrian Government of the Institute The United s government assessment report has confirmed that the Syrian government did carry out a chemical attack on the opposition alliance along the suburban regions of Damascus in the early hours of August 21, 2013. The attacks were confirmed by several witnesses including medical personals, media reports from 12 different areas in the Damascus region and trustworthy non-governmental organizations (The White house, 2013). The use of chemical weaponry was confirmed based on the immediate symptoms of those who were affected. According to media reports and medical personals who attended to these patients, the symptoms were largely internal including breathlessness, foaming from the nose and mouth, dizziness, running nose, irritation and constriction of the eye pupils, blurredness, nausea, vomiting, general body weakness and loss of consciousness. These symptoms were consistent with exposure to neurotoxic substances The US assessment confirmed the death of more than 1400 people including many children (The White house, 2013; Syria chemical attack, 2013).
Experts believe that this attack by the Syrian government aimed to eradicated opposition forces in the Damascus regions. In its previous attacks using most of its conventional weaponry the regime has been unable to clear the region of the opposition elements and hence has resorted to chemical warfare. The Syrian government has loads of chemicals in stock including sarin, mustard, VX, and munitions to deliver these agents to the target locations. The Syrian military is believed to possess thousands of tons of chemicals and its precursors including huge quantities of sarin along with the required knowledge and expertise on the use of chemical warfare (The White house, 2013; Syria chemical attack, 2013). The final call for carrying out a chemical attack rests with the Syrian President, Bashar al-Azad, who had initiated a similar chemical attack, but on a smaller scale last year in the Damascus region. Further reports have also confirmed that personal from the Syrian Scientific Studies and Research Center (SSRC) were involved in the preparation of the chemical weapons before the attack. The chemicals used for the attack were mixed in a nearby region and the regimen employed surface to surface rockets and artilleries to carry out the attack. Within three hours following the attacks, many hospitals in the Damascus region received thousands of people displaying symptoms of neurotoxin exposure. The role of the regimen in the attack was further confirmed through interception of communications involving senior personal it the regimen. Communication reports also indicate that the weapons personal were asked to cease the attacks by the afternoon of August 21(The White house, 2013). In addition the trajectories determined through angular measurements have further ascertained that a large military base could have been the source of the attacks (Syria chemical attack, 2013). Samples obtained from the attacked areas by the Organization for the Prohibition of the Chemical Weapons, confirm the presence of sarin, a nerve agent, found in a majority of rockets used in the attacks. These findings are consistent with the organophosphate intoxication found in the blood and urine samples of those who survived the attacks. Reports from the Human Rights Watch have found no evidence for the use of huge quantities of chemicals and possession of rockets by the opposition forces (Syria chemical attack, 2013).
However, despite several concrete reports on the role of Syrian government in the attacks, the regimen has denied any role in the attacks and has further accused rebel groups to have conspired the attack along with US, Turkey and Saudi Arabia. The government further questioned the rationale behind the attacks when their own soldiers were present in the region. Russia supported the claims of the Syrian government and accused the reports of the UN and the United States to be false and developed to implicate the Syrian government.

...is constructed clearly manifests this, wherein section 1 defines the rights being upheld, while section 2 defines Government legitimate interferences that may curtail this right. (Ashcroft et al., 1999, p. 22) 3. The general principles as to Government legitimate interferences are set by the European Court of Human Rights following the two cases: Bukta v Hungary [2007] ECHR Application No 25691/04 (17 July 2007) and Makhmudov v Russia [2007] ECHR Application No 35082/04 (26 July 2007), whereby the concerned State parties had been found violating Article 11 (Marauhn, 2007, p. 120). The Court laid the burden of proof on the State, ruling that Government interference...
4 Pages(1000 words)Essay

... of each actor. What are Human Rights? Human Rights can broadly be defined as a set of various international norms that have been designed to help in the protection of all people all over the world from any form of severe social, legal and political abuses. Common examples of human rights generally include the right of an individual not to face any torture, the right to have freedom of religion as well as the undeniable right for one to have affair trial in the event that they happen to be charged with a crime (Orend 2002). The main sources of the current versions of human rights include the International Bill of Rights which emerged as the United Nations, 1948b Universal Declaration of Human Rights and various treaties and human rights...
6 Pages(1500 words)Essay

...that the United Nation faced in its attempt to promote human right in a global context is the controversy within its approach to the concept of human right and freedom (Wright, 2001: 59). The perpetual debate on the universality of human right apparently overshadowed its achievements to a great extent. The oriental scholars and political authorities often are often found to criticize the provisions of the UN Charter of human rights considering that these provisions are completely “devoid of any legal commitment” (Flinterman and Gutter, n.d: 1). But the view of human...
12 Pages(3000 words)Essay

..., the system must allow for redress via some institutional format to ensure that right-holders are not being abused. This check and balance system allows for the full panoply of rights and entitlements to be protected in the society. The current international human rights system functions on this overall model, though countries all over the world often have issues ensuring that this accountability stem is enforced. This paper will discuss general human rights concepts and then focus on individual cases to illustrate their importance. It is only by understanding how rights can be subverted that a proper defense can be...
14 Pages(3500 words)Research Paper

...for an independent and free form of government is the basic right of each individual. Besides this, civil rights are being violated all over the world which is against the charter international of human rights. Injustice on domestic and international level, lack of freedom of speech, and expression are few of the issues being faced in terms of human rights. How are gender and human rights related? Gender and human rights are usually co related in terms of their relevance to each other. The fair gender is often subjected to inhumane treatment, sexual abuses, and physical...
2 Pages(500 words)Essay

...on what rights are. For example, article 1 of the universal declaration of human rights, it is spelled out that all human beings are equal in dignity and rights. Analytically, this could be termed as the primary concept of interpreting how every human being should be treated. This means that any act of discriminating or undermining the state of another human being is uncalled for. Another major article is article 3, which stipulates that e very person has the rights to life. In relation to this article, it is correct to argue that any act by another human being that threatens the life of...
1 Pages(250 words)Essay

... that by genocide, the human rights are being violated (Snarr & Michael, 36). In the first article of the UDHR I says that all human being are born free and equal in dignity and rights. In case of a genocide the right explained in this article is violated since the lives of the people are taken which is against the article. All people are supposed to be free to live in any part of the world provided they have the legal documents that are needed to be at that specific part. Alienating some people by the basis of their race, ethnicity or religion. Some of the famous genocide cases include the Rwanda genocide in 1994 which culminated as a result of ethnic differences between two communities. The Holocaust was also one of the factors that led...
1 Pages(250 words)Essay

...responsibility, and makes one ready for marriage (Guerin 1). In the country, the procedure is usually carried out on girls between the age of nine and thirteen years (Guerin 1). However, it is said to be done on girls as young as six years of age. In my opinion, the article demonstrates the worst form of human rights violation that continues to take place uncontrolled in some parts of the world. This is because it is done to minors who are not aware of the consequences. The minors are denied the rights of physical integrity. Moreover, the girls lack right to access good standard of health. This is because uneducated people with no knowledge on a good standard of health...
1 Pages(250 words)Essay
sponsored ads
Save Your Time for More Important Things
Let us write or edit the research paper on your topic "Human Rights" with a personal 20% discount.
GRAB THE BEST PAPER

Let us find you another Research Paper on topic Human Rights for FREE!