Comments (0)
Add to wishlistDelete from wishlist
Cite this document
Summary
Despite the fact that women represent roughly, half of the world's population, they have been ill - treated and neglected until quite recently. That women have been abused both verbally and physically is well known. This malady is still quite rampant and women have been denied suffrage, equal pay for equal work, etc…
Download full paperFile format: .doc, available for editing
HIDE THIS PAPERGRAB THE BEST PAPER96.8% of users find it useful 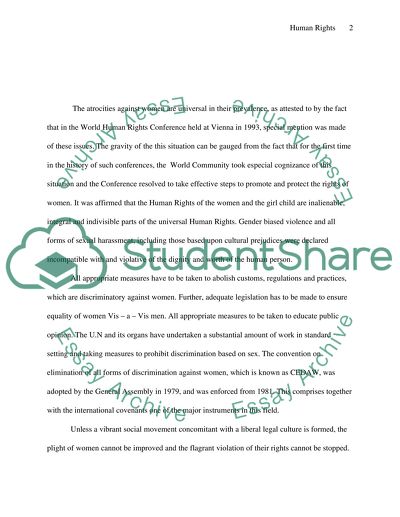 Despite the fact that women represent roughly, half of the world's population, they have been ill - treated and neglected until quite recently. That women have been abused both verbally and physically is well known. This malady is still quite rampant and women have been denied suffrage, equal pay for equal work, etc. (Dr. S. Subramanian, Human Rights - International Challenges.)
The reason for such a state of affairs is that women were economically dependent on their male relatives or husband to provide them with food , clothing and shelter. In addition to this, they were physically weaker to men; hence, they were subjugated and made subservient to men from time immemorial. Women were therefore sexually exploited. Until quite recently, women were relegated to the background in respect of social and economic status, education, politics, health and non - recognition of her unpaid work at home in domestic food production, etc.
Until quite recently even in Great Britain, a women's property was considered to belong to her husband. American Women were denied their civil right of suffrage until 1920. In 1960 Women got together to obtain legal equality with men. After the passing of the Civil Rights Act in 1964, women obtained many gains in employment. In 1970, efforts were made by women to change the unfair practices and attitudes towards women in society. In 1970, the U.S. Supreme Court passed a landmark judgment in the case US V Virginia. The Supreme Court decided that Sex Discrimination is unconstitutional unless the state can advance an exceedingly persuasive justification. (Microsoft Corporation, Encarta article Women's Rights, Katrin Schultheiss)
The atrocities against women are universal in their prevalence, as attested to by the fact that in the World Human Rights Conference held at Vienna in 1993, special mention was made of these issues. The gravity of the this situation can be gauged from the fact that for the first time in the history of such conferences, the World Community took especial cognizance of this situation and the Conference resolved to take effective steps to promote and protect the rights of women. It was affirmed that the Human Rights of the women and the girl child are inalienable, integral and indivisible parts of the universal Human Rights. Gender biased violence and all forms of sexual harassment, including those based upon cultural prejudices were declared incompatible with and violative of the dignity and worth of the human person.
All appropriate measures have to be taken to abolish customs, regulations and practices, which are discriminatory against women. Further, adequate legislation has to be made to ensure equality of women Vis - a - Vis men. All appropriate measures to be taken to educate public opinion. The U.N and its organs have undertaken a substantial amount of work in standard setting and taking measures to prohibit discrimination based on sex. The convention on elimination of all forms of discrimination against women, which is known as CEDAW, was adopted by the General Assembly in 1979, and was enforced from 1981. This comprises together with the international covenants one of the major instruments in this field.
Unless a vibrant social movement concomitant with a liberal legal culture is formed, the plight of women cannot be improved and the flagrant violation of their rights cannot be stopped. A radical change in social outlook combined with a wider dissemination of legal literacy is required to promote the Human Rights of women.
Sources.
1. Katrin Schultheiss. Microsoft Corporation, Encarta article Women's Rights.
2. Dr. S. Subramanian. Human Rights - International Challenges. Manas
Publications. 1997. Read More
Share:
Tags
Cite this document
(“Human Rights and Women Essay Example | Topics and Well Written Essays - 500 words”, n.d.)
Human Rights and Women Essay Example | Topics and Well Written Essays - 500 words. Retrieved from https://studentshare.org/miscellaneous/1500332-human-rights-and-women

CHECK THESE SAMPLES OF Human Rights and Women

As far as religious practices are concerned, the role of women in Islam and the Wicca religion is very impor...

...Hello, I have read this and thinks it’s perfect I have slight amendments which are highlighted in red. thanks Universal Declaration of Human Rights Introduction Human rights are defined as, the basic standards by which we can identify and measure inequality and fairness. These rights are specified in the Universal Declaration of Human Rights.1 The United Nations adopted the Universal Declaration of Human Rights (UDHR) on the 10th of December 1948. It consists of a number of civil, cultural, economic, political, and social rights. Although, it is not legally binding, it provides an authoritative interpretation of several articles of the UN Charter; and the latter is binding on the member states of the United Nations.2 There are several...
8 Pages(2000 words)Case Study
sponsored ads
Save Your Time for More Important Things
Let us write or edit the essay on your topic "Human Rights and Women" with a personal 20% discount.
GRAB THE BEST PAPER

Let us find you another Essay on topic Human Rights and Women for FREE!