Comments (0)
Add to wishlistDelete from wishlist
Cite this document
Summary
The nondiscrimination policy and health and safety laws influence the organization’s liability if the policy and laws are not implemented and followed by the employers in dealing with the employees. In workplaces, discrimination is not allowed and there are many traits that…
Download full paperFile format: .doc, available for editing
HIDE THIS PAPERGRAB THE BEST PAPER98.5% of users find it useful 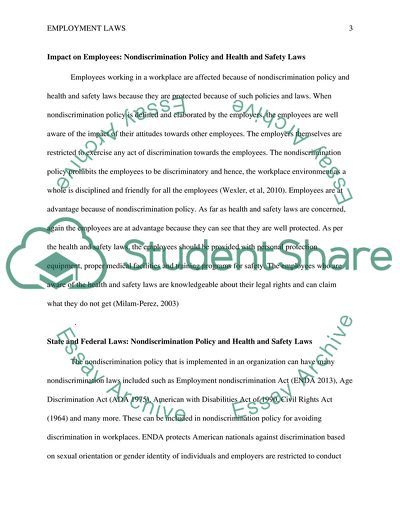 ... their distinctions. In controlling diversity, attempts are made by both the business as well as the persons in it to become accustomed to and acknowledge the value of diversity. Businesses can as well deal with diversity concerns in more limited techniques: (1) equal employment opportunity and (2) affirmative action. Equal employment opportunity (EEO) is a wide thought implying that persons must have equal dealing in every service associated activities. Persons who are sheltered under equal employment regulations are protected from illegitimate prejudice, which takes place as persons having identical traits are distinguished against because of that trait. Different laws have been passed to defend persons who share some particular traits...
3 Pages(750 words)Essay

...Topic: Equal Employment Opportunity Commission (EEOC). What is the EEOC? Equal Employment Opportunity Commission (EEOC) is a federal agency that enforces administrative and judicial laws for civil rights to facilitate equal opportunity in employment through education and technical assistance. As per EEO laws, an employer is prohibited from discriminating current or potential employees at workplace (Heathfield, 2011). EEOC is under mandatory obligation to monitor compliance and enforcement of Title VII under Civil Rights Act, 1964 along with other federal civil rights (Entrepreneur.com). Civil Rights Act, 1964, Equal Pay Act of 1963 and the Americans with Disabilities Act of 1990 are some such practices of EEOC that prohibit discrimination...
5 Pages(1250 words)Research Paper

...﻿ Equal Employment Opportunity A case where 19 female employees, of who many were teenagers, were repeatedly sexually harassed at the RENO, Nev. – Scolari’s Warehouse Market. The case, which was filed in U.S. District Court for the Northern District of Nevada by the EEOC, was reported by Agency on September 18, 2008. The senior officers of the company touched inappropriately the females, made lewd comments and propositioned the workers and passed around naked photos of themselves in addition to other acts. The EEOC decided that the company would pay $425,000 to the identified victims and furnish other relief to settle the case. It also said that the company’s management had failed to address and correct the issue even after...
2 Pages(500 words)Essay

...Running Head: EQUAL PAY ACT Background of the Act According to Meiners and others, the 1963’s Equal Pay Act was established as the first of its kind of law and its focus was on discrimination in the context of employment. The Act prohibits the discrimination of wages on sex basis. In the Act it is held that it is against the Federal law to pay women and men workers different wages in a situation where a job calls for equal effort, skill, responsibility as well as same conditions of work. Under this Act, Job totles stand irrelevant; the content of the Job is reviewed. However, the Act on Equal Pay allows for wage differences if such are as a result of: a system of merit, a system of seniority, a system where earnings are measured...
4 Pages(1000 words)Essay

... and women separate for performing the same work because of their illegality in sex. The work does not require being same but it must be substantially equal. Age Discrimination in Employment Act 1967 The Age Discrimination in Employment Act 1967 explains that it prohibits or restricts the discrimination made by the employees in the organization on the basis of their age. The Act doesn’t discriminate the employees over 40 years of age. This Act was passed on 15 December 1967. This act was signed into law by President Lyndon B Johnson in the year 1967. This act strictly prohibits the use of the employees or the applicant age as a factor for hiring, recruiting or selecting the employees. This act is equally applicable in case of setting...
4 Pages(1000 words)Essay

...﻿ Equal Employment Opportunity Introduction The Federal Equal Opportunities legislation includes several Acts that determine and enforce fairness in the workplace. Those acts include the Civil Rights Act of 1866 and 1871, Equal Pay Act of 1963, Civil Rights Act of 1964 (Title VI) and (Title VII), Executive Order 11246, Education Amendments of 1972, Rehabilitation Act of 1973, Vietnam Era Veterans Readjustment Act of 1974, Age Discrimination Act of 1974, Civil Right Restoration Act of 1987, The ADA, and the Civil Rights Act of 1991. An explanation of the American Disabilities Act (ADA), Executive Order 11246, and the Age Discrimination Act of 1974 will be provided. This paper will then tie the three into a final discussion of how...
10 Pages(2500 words)Dissertation
sponsored ads
Save Your Time for More Important Things
Let us write or edit the essay on your topic "Equal-employment opportunity laws" with a personal 20% discount.
GRAB THE BEST PAPER

Let us find you another Essay on topic Equal-employment opportunity laws for FREE!