Comments (0)
Add to wishlist Delete from wishlist
Cite this document
Summary
[Professor Name] [Course Number] [Professor Name] [Date] Takings- Environmental Law The Federal Endangered Species Act ESA of 1973 was regulated to ensure that species and animals would be protected by the inauguration of their conservation programs. The objective was basically to protect those species and animals that are left very few in the world…
Download full paper File format: .doc, available for editing
HIDE THIS PAPERGRAB THE BEST PAPER91.4% of users find it useful 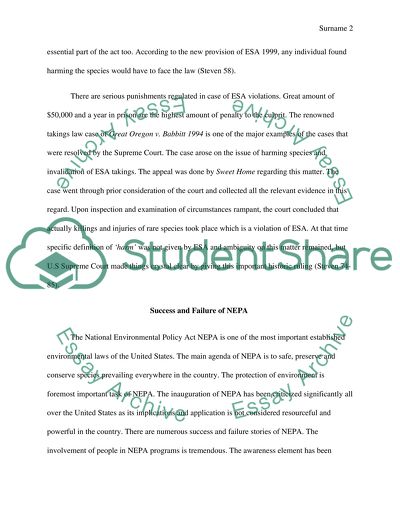 Download file to see previous pages The term ‘takings’ has significant role in the environmental law as the term elucidates that those species who are catalogued endangered under the provision of ESA are protected and it does not allow individuals to harm them or take them along. The ‘taking’ terminology suggests that taking those species away. The harming issue has been remained under the great debate that either under the ESA acts harming is allowed or not. Several law cases have been filed and culprits got away from them as they came under the harming category. This process carried till 1999, when finally ESA came with the clear cut definition of harming and declared it as an essential part of the act too. According to the new provision of ESA 1999, any individual found harming the species would have to face the law (Steven 58). There are serious punishments regulated in case of ESA violations. Great amount of $50,000 and a year in prison are the highest amount of penalty to the culprit. The renowned takings law case of Great Oregon v. Babbitt 1994 is one of the major examples of the cases that were resolved by the Supreme Court. The case arose on the issue of harming species and invalidation of ESA takings. The appeal was done by Sweet Home regarding this matter. The case went through prior consideration of the court and collected all the relevant evidence in this regard. Upon inspection and examination of circumstances rampant, the court concluded that actually killings and injuries of rare species took place which is a violation of ESA. At that time specific definition of ‘harm’ was not given by ESA and ambiguity on this matter remained, but U.S Supreme Court made things crystal clear by giving this important historic ruling (Steven 74-85). Success and Failure of NEPA The National Environmental Policy Act NEPA is one of the most important established environmental laws of the United States. The main agenda of NEPA is to safe, preserve and conserve species prevailing everywhere in the country. The protection of environment is foremost important task of NEPA. The inauguration of NEPA has been criticized significantly all over the United States as its implications and application is not considered resourceful and powerful in the country. There are numerous success and failure stories of NEPA. The involvement of people in NEPA programs is tremendous. The awareness element has been established among the people and people have started to take it very seriously. By the help of volunteers, awareness measures among regions have been started too. The outcomes achieved till date present a promising picture (Vallero 67). The Forest Service funded Vegetation Management Project was launched successfully by NEPA so that issues regarding the forest health would be eradicated. The vegetation concerns were also present in Crooked River which was addressed by the implementation of this project. The Rural Development Community Facilities Program proposed that building of hostel for students would be beneficiary for individuals and college too. NEPA took over this proposal and built the apartments in order to facilitate students. NEPA has been providing services to the defence sector of the United States too. Their services are highly regarded as they made precise plans for the successful inauguration of defence endeavours. The Energy Conservation ...Download file to see next pages Read More
Share:
Cite this document
(“Environmental Law Essay Example | Topics and Well Written Essays - 1250 words”, n.d.)
Environmental Law Essay Example | Topics and Well Written Essays - 1250 words. Retrieved from https://studentshare.org/law/1478609-environmental-law

New and complex issues have arisen which demanded fresh understanding and handling of cases involved them. This has resulted in the enhanced development of specialized laws e.g. cyber laws and interpretation of those laws. The same is true with Media Laws. Media has developed much in the last half-century. As it evolved as a profession and more people started to join it, there arose the levels of money involved in it. With this grew the contractual obligations on the parts of parties and concerned laws e.g. patent laws, privacy laws, and copyrights laws, etc. also started to play their parts. With these issues, the role of law in the media industry also reached a new height.
Mathew Fisher, the appellant, joined a band with Mr...
6 Pages (1500 words) Assignment
sponsored ads
Save Your Time for More Important Things
Let us write or edit the essay on your topic "Environmental Law" with a personal 20% discount.
GRAB THE BEST PAPER