Comments (0)
Add to wishlist Delete from wishlist
Cite this document
Summary
Student's Full Name: Professor's Name: A Legal Event (Business Law I – ACCT 350) 18 May 2013 (estimated word count = 1,315) Introduction The business environment today has become much more competitive; this is because the competition is now global in the sense anybody anywhere can compete more effectively due to the vast improvements in various technologies, such as in telecommunications which make business transactions faster, cheaper, and easier…
Download full paper File format: .doc, available for editing
HIDE THIS PAPERGRAB THE BEST PAPER91.7% of users find it useful 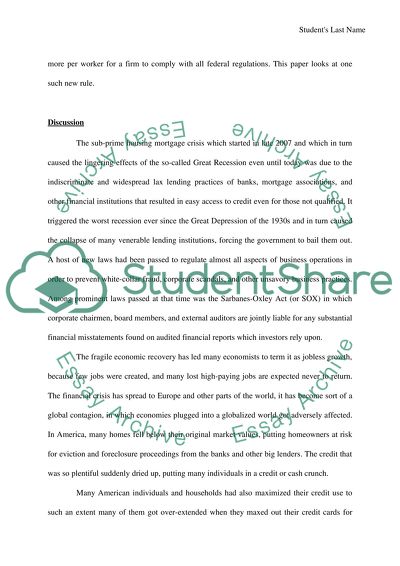 Download file to see previous pages Among these factors, it is generally considered that regulations pose the most potential threat to any firm doing business. Experts call this as regulatory risks that can alter the way a firm operates, whether it adds to its costs or even imperil its existence. An example is clean air standards and higher mileage requirements in the auto industry. The oil industry has likewise adjusted and transitioned to lead-free gasoline in most nations. There are so many rules, regulations, and laws for business firms to comply with, it costs a significant amount to do business nowadays. There are regulations on environment, on workplace safety, consumer protection, employees’ health, fair competition, taxes and business practices which require substantial compliance or otherwise face stiff fines and penalties. The list is practically endless, such that a recent study indicated it costs $10,000 more per worker for a firm to comply with all federal regulations. This paper looks at one such new rule. Discussion The sub-prime housing mortgage crisis which started in late 2007 and which in turn caused the lingering effects of the so-called Great Recession even until today was due to the indiscriminate and widespread lax lending practices of banks, mortgage associations, and other financial institutions that resulted in easy access to credit even for those not qualified. It triggered the worst recession ever since the Great Depression of the 1930s and in turn caused the collapse of many venerable lending institutions, forcing the government to bail them out. A host of new laws had been passed to regulate almost all aspects of business operations in order to prevent white-collar fraud, corporate scandals, and other unsavory business practices. Among prominent laws passed at that time was the Sarbanes-Oxley Act (or SOX) in which corporate chairmen, board members, and external auditors are jointly liable for any substantial financial misstatements found on audited financial reports which investors rely upon. The fragile economic recovery has led many economists to term it as jobless growth, because few jobs were created, and many lost high-paying jobs are expected never to return. The financial crisis has spread to Europe and other parts of the world, it has become sort of a global contagion, in which economies plugged into a globalized world got adversely affected. In America, many homes fell below their original market values, putting homeowners at risk for eviction and foreclosure proceedings from the banks and other big lenders. The credit that was so plentiful suddenly dried up, putting many individuals in a credit or cash crunch. Many American individuals and households had also maximized their credit use to such an extent many of them got over-extended when they maxed out their credit cards for purchase of consumer items and durables which they soon regretted. In other words, people were deeply in debt, and in this volatile situation, the lenders and banks soon turned into a more aggressive collection techniques and strategies to recover their ...Download file to see next pages Read More
Share:
Tags
Cite this document
(“Law events Essay Example | Topics and Well Written Essays - 1000 words”, n.d.)
Law events Essay Example | Topics and Well Written Essays - 1000 words. Retrieved from https://studentshare.org/law/1478288-law-events

CHECK THESE SAMPLES OF Law events

New and complex issues have arisen which demanded fresh understanding and handling of cases involved them. This has resulted in the enhanced development of specialized laws e.g. cyber laws and interpretation of those laws. The same is true with Media Laws. Media has developed much in the last half-century. As it evolved as a profession and more people started to join it, there arose the levels of money involved in it. With this grew the contractual obligations on the parts of parties and concerned laws e.g. patent laws, privacy laws, and copyrights laws, etc. also started to play their parts. With these issues, the role of law in the media industry also reached a new height.
Mathew Fisher, the appellant, joined a band with Mr...
6 Pages (1500 words) Assignment
sponsored ads
Save Your Time for More Important Things
Let us write or edit the essay on your topic "Law events" with a personal 20% discount.
GRAB THE BEST PAPER

Let us find you another Essay on topic Law events for FREE!