Comments (0)
Add to wishlist Delete from wishlist
Cite this document
Summary
Law of Theft Act 1968 (UK) Name: Number: Course: Lecturer: Date: Theft Act 1968 (UK) The law is in Chapter 60 of the laws of the United Kingdom. It was enacted on 26th July, 1968 by Her Majesty, the Queen of the United Kingdom, having been fully advised and consented by the House of Lords and Commons, giving her the authority to append her signature to the law…
Download full paper File format: .doc, available for editing
HIDE THIS PAPERGRAB THE BEST PAPER92% of users find it useful 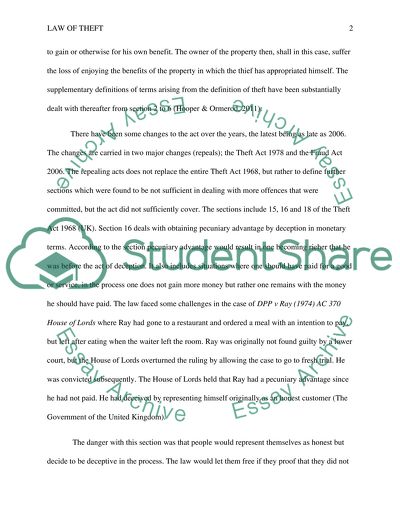 Extract of sample "Evaluating the Law of Theft"

Download file to see previous pages The resulting act was an effort of a committee of parliament, Criminal Law Revision Committee, which was tasked to reform the English law of theft. To ensure that the law captures all those separate laws, substantial definitions were on all circumstances of stealing. The law further makes provisions for criminal proceedings available to one party in a marriage relationship against the partner. The law also makes some amendments to the Post Office Act 1953, besides other enactments and to serve other purposes connected to it. This is about the entire law, but in this analysis we are limited to section 1 only for the purposes of this study (Ramage, S, 2005). In section 1, subsection1 of the Act, a basic definition of the term theft is offered, by which the sections seek to set out what entails the offence of theft. A person will be said to be guilty of the offence if he dishonestly appropriates himself or herself, property belonging to another person, with a clear intention to deprive permanently the other of it. For purposes of legal interpretation, theft and stealing shall be construed accordingly to mean the same thing. Where, stealing can take the place of theft and theft can be said to be stealing. In order to be said that theft has occurred, the thief, according to subsection 2, will appropriate himself with a view to gain or otherwise for his own benefit. The owner of the property then, shall in this case, suffer the loss of enjoying the benefits of the property in which the thief has appropriated himself. The supplementary definitions of terms arising from the definition of theft have been substantially dealt with thereafter from section 2 to 6 (Hooper & Ormerod, 2011). There have been some changes to the act over the years, the latest being as late as 2006. The changes are carried in two major changes (repeals); the Theft Act 1978 and the Fraud Act 2006. The repealing acts does not replace the entire Theft Act 1968, but rather to define further sections which were found to be not sufficient in dealing with more offences that were committed, but the act did not sufficiently cover. The sections include 15, 16 and 18 of the Theft Act 1968 (UK). Section 16 deals with obtaining pecuniary advantage by deception in monetary terms. According to the section pecuniary advantage would result in one becoming richer that he was before the act of deception. It also includes situations where one should have paid for a good or service, in the process one does not gain more money but rather one remains with the money he should have paid. The law faced some challenges in the case of DPP v Ray (1974) AC 370 House of Lords where Ray had gone to a restaurant and ordered a meal with an intention to pay, but left after eating when the waiter left the room. Ray was originally not found guilty by a lower court, but the House of Lords overturned the ruling by allowing the case to go to fresh trial. He was convicted subsequently. The House of Lords held that Ray had a pecuniary advantage since he had not paid. He had deceived by representing himself originally as an honest customer (The Government of the United Kingdom). The danger with this section was that people would represent themselves as honest but decide to be deceptive in the process. The law would let them free if they proof that they did not intend to do so. This ...Download file to see next pages Read More
Share:
Tags
Cite this document
(“Evaluating the Law of Theft Essay Example | Topics and Well Written Essays - 1000 words”, n.d.)
Retrieved from https://studentshare.org/law/1469733-evaluating-the-law-of-theft

CHECK THESE SAMPLES OF Evaluating the Law of Theft

New and complex issues have arisen which demanded fresh understanding and handling of cases involved them. This has resulted in the enhanced development of specialized laws e.g. cyber laws and interpretation of those laws. The same is true with Media Laws. Media has developed much in the last half-century. As it evolved as a profession and more people started to join it, there arose the levels of money involved in it. With this grew the contractual obligations on the parts of parties and concerned laws e.g. patent laws, privacy laws, and copyrights laws, etc. also started to play their parts. With these issues, the role of law in the media industry also reached a new height.
Mathew Fisher, the appellant, joined a band with Mr...
6 Pages (1500 words) Assignment
sponsored ads
Save Your Time for More Important Things
Let us write or edit the essay on your topic "Evaluating the Law of Theft" with a personal 20% discount.
GRAB THE BEST PAPER

Let us find you another Essay on topic Evaluating the Law of Theft for FREE!