Comments (0)
Add to wishlistDelete from wishlist
Cite this document
Summary
The essay "Employment Law" focuses upon two aspects of the employment law. Part A contains the information about the employment rights of pregnant women. And part B contains the conditions of obtaining the flexible time working by the employees due to the illness of their child…
Download full paperFile format: .doc, available for editing
HIDE THIS PAPERGRAB THE BEST PAPER93.6% of users find it useful 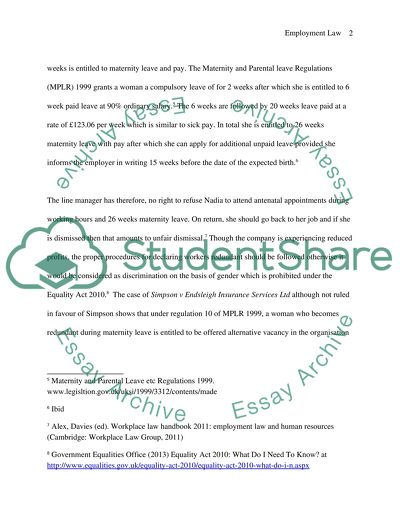 Download file to see previous pages Under the Pregnant Workers Directive, a woman who has worked for 26 weeks is entitled to maternity leave and pay. The Maternity and Parental leave Regulations (MPLR) 1999 grants to the woman a compulsory leave of for 2 weeks after which she is entitled to 6 weeks paid leave at 90% ordinary salary. The 6 weeks are followed by 20 weeks leave paid at a rate of £123.06 per week which is similar to sick pay. In total, she is entitled to 26 weeks maternity leave with pay after which she can apply for additional unpaid leave provided she informs the employer in writing 15 weeks before the date of the expected birth.
The line manager has, therefore, no right to refuse Nadia to attend antenatal appointments during working hours and 26 weeks maternity leave. On return, she should go back to her job and if she is dismissed then that amounts to unfair dismissal. Though the company is experiencing reduced profits, the proper procedures for declaring workers redundant should be followed otherwise it would be considered as discrimination on the basis of gender which is prohibited under the Equality Act 2010. The case of Simpson v Endsleigh Insurance Services Ltd, although not ruled in favor of Simpson, shows that under regulation 10 of MPLR 1999, a woman who becomes redundant during maternity leave is entitled to be offered alternative vacancy in the organization or with an associated employer. Endsleigh closed down branches and Simpson was invited to apply for a vacancy in a new place while she was on leave but she declined. EAT held that she was not dismissed unfairly. What is more, Nadia has the right to request for flexible working time under section 80f of the Employment Act 1996.10 This is to enable her to take care of the child. One can be declared redundant if the employer ceases to operate the business or the skills required to carry out duties are obsolete thus no longer required for the business. If Gemma cannot provide justification for declaring Nadia redundant when she returns, then it is unwarranted and discriminatory. There should also have been consultations with trade unions and worker councils before decisions for redundancies are achieved and the right procedures followed to select those to go but not based on personal reasons such as pregnancy.11 If redundancy is genuine, she is entitled to redundancy pay since she has worked for the company for three years. This also depends on her age. For age 21-40 redundancy pay is calculated as 1 week’s pay for each year worked and those above 40yrs get 11/2 week pay for each complete year.12 However, she ...Download file to see next pagesRead More
Share:
Tags
Cite this document
(“Employment Law Coursework Example | Topics and Well Written Essays - 1250 words”, n.d.)
Employment Law Coursework Example | Topics and Well Written Essays - 1250 words. Retrieved from https://studentshare.org/law/1467116-employment-law

New and complex issues have arisen which demanded fresh understanding and handling of cases involved them. This has resulted in the enhanced development of specialized laws e.g. cyber laws and interpretation of those laws. The same is true with Media Laws. Media has developed much in the last half-century. As it evolved as a profession and more people started to join it, there arose the levels of money involved in it. With this grew the contractual obligations on the parts of parties and concerned laws e.g. patent laws, privacy laws, and copyrights laws, etc. also started to play their parts. With these issues, the role of law in the media industry also reached a new height.
Mathew Fisher, the appellant, joined a band with Mr...
6 Pages(1500 words)Assignment
sponsored ads
Save Your Time for More Important Things
Let us write or edit the coursework on your topic "Employment Law" with a personal 20% discount.
GRAB THE BEST PAPER

Let us find you another Coursework on topic Employment Law for FREE!