The Application of Positive Law: a Moral Process - Essay Example

Comments (0)
Add to wishlistDelete from wishlist
Cite this document
Summary
The Application of Positive Law: A moral Process? This paper will assess the argument that lawyers need only apply posited law to cases and not assess whether it is just or unjust. The positivist approach to the validity of law will be examined and evaluated against its main critic, naturalism…
Download full paperFile format: .doc, available for editing
HIDE THIS PAPERGRAB THE BEST PAPER96% of users find it useful 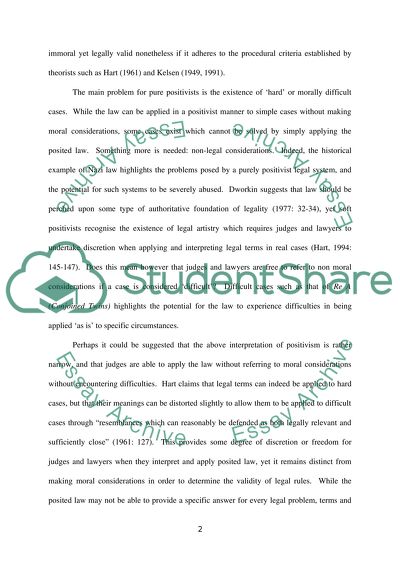 Extract of sample "The Application of Positive Law: a Moral Process"

Download file to see previous pages Positivism thus fundamentally strikes a major distinction between ideology and law and claims that only law can provide the adequate grounds for making legal decisions (Kennedy, 1997: 24-25). Therefore the distinction that positivism makes also establishes a difference between legal and non-legal principles, in that the former is represented by posited law and the latter by moral valuations. The core of positivism is based on the assumption that morality does not and can not exist on a universal or objective level. This is because concepts of right and wrong are only located in individual beliefs and attitudes towards moral concepts (Raphael, 1994: ch 2). These concepts can only ever be subjective because an act is not inherently immoral; it is rather immoral because an individual considers it to be so. Morality is not an aspect within an act, it is an aspect which exists in the way an individual observes an act, and because this observation is emotional, whether an act is right or wrong can and does differ between individuals depending on their moralistic outlook (Hume, 2003: III.i.I). Positivist lawyers thus claim that the only criteria which exist to determine whether a legal rule is valid or not depends on concepts different from subjective notions of morality. Law is hence able to be immoral yet legally valid nonetheless if it adheres to the procedural criteria established by theorists such as Hart (1961) and Kelsen (1949, 1991). The main problem for pure positivists is the existence of ‘hard’ or morally difficult cases. While the law can be applied in a positivist manner to simple cases without making moral considerations, some cases exist which cannot be solved by simply applying the posited law. Something more is needed: non-legal considerations. Indeed, the historical example of Nazi law highlights the problems posed by a purely positivist legal system, and the potential for such systems to be severely abused. Dworkin suggests that law should be perched upon some type of authoritative foundation of legality (1977: 32-34), yet soft positivists recognise the existence of legal artistry which requires judges and lawyers to undertake discretion when applying and interpreting legal terms in real cases (Hart, 1994: 145-147). Does this mean however that judges and lawyers are free to refer to non moral considerations if a case is considered ‘difficult’? Difficult cases such as that of Re A (Conjoined Twins) highlights the potential for the law to experience difficulties in being applied ‘as is’ to specific circumstances. Perhaps it could be suggested that the above interpretation of positivism is rather narrow, and that judges are able to apply the law without referring to moral considerations without encountering difficulties. Hart claims that legal terms can indeed be applied to hard cases, but that their meanings can be distorted slightly to allow them to be applied to difficult cases through “resemblances which can reasonably be defended as both legally relevant and sufficiently close” (1961: 127). This provides some degree of discretion or freedom for judges and lawyers when they interpret and apply posited law, yet it remains distinct from making moral considerations in order to determine the validity of legal rules. While the posited law may not be able to provide a specific answer for every legal problem, terms and definitional applications can be ascertained without the need for morality ...Download file to see next pagesRead More
Share:
Tags
Cite this document
(“The Application of Positive Law: a Moral Process Essay”, n.d.)
The Application of Positive Law: a Moral Process Essay. Retrieved from https://studentshare.org/law/1436517-jurisprudence
(The Application of Positive Law: A Moral Process Essay)
The Application of Positive Law: A Moral Process Essay. https://studentshare.org/law/1436517-jurisprudence.
“The Application of Positive Law: A Moral Process Essay”, n.d. https://studentshare.org/law/1436517-jurisprudence.
Comments (0)
Click to create a comment or rate a document

CHECK THESE SAMPLES OF The Application of Positive Law: a Moral Process

New and complex issues have arisen which demanded fresh understanding and handling of cases involved them. This has resulted in the enhanced development of specialized laws e.g. cyber laws and interpretation of those laws. The same is true with Media Laws. Media has developed much in the last half-century. As it evolved as a profession and more people started to join it, there arose the levels of money involved in it. With this grew the contractual obligations on the parts of parties and concerned laws e.g. patent laws, privacy laws, and copyrights laws, etc. also started to play their parts. With these issues, the role of law in the media industry also reached a new height.
Mathew Fisher, the appellant, joined a band with Mr...
6 Pages(1500 words)Assignment
sponsored ads
Save Your Time for More Important Things
Let us write or edit the essay on your topic "The Application of Positive Law: a Moral Process" with a personal 20% discount.
GRAB THE BEST PAPER

Let us find you another Essay on topic The Application of Positive Law: a Moral Process for FREE!