Comments (1)
Add to wishlist Delete from wishlist
Cite this document
Summary
The factual scenario raises various issues in company law relating to the legality of proposed transactions.With regard to the proposed transactions and dissatisfaction of Ergan,Arif and Moshe as minority shareholders in the actions of Pedro and Morgan;this initially raises issues of breach of directors’ duties under the Companies Act 2006…
Download full paper File format: .doc, available for editing
HIDE THIS PAPERGRAB THE BEST PAPER96.6% of users find it useful 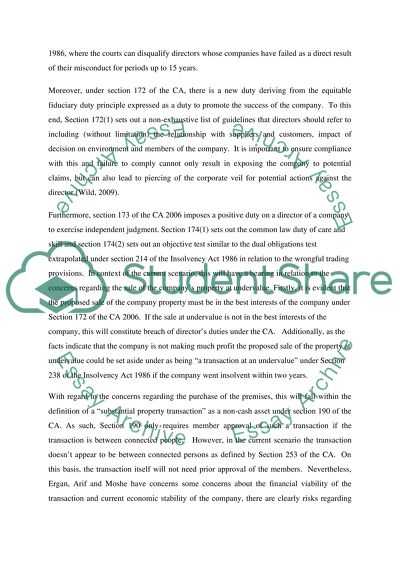 Download file to see previous pages The factual scenario raises various issues in company law relating to the legality of proposed transactions. With regard to the proposed transactions and dissatisfaction of Ergan,Arif and Moshe as minority shareholders in the actions of Pedro and Morgan;this initially raises issues of breach of directors’ duties under the Companies Act 2006. Section 171 of the Companies Act 2006 (CA) provides that “a director of a company must- a) act in accordance with the company’s constitution, and b) only exercise powers for the purposes for which they are conferred” (CA). Section 175 of the CA further imposes a positive obligation on directors to “avoid a situation in which he has, or can have, a direct or indirect interest that conflicts, or possibly may conflict, with the interests of the company” (Section 175 of the CA). If we apply this by analogy to the current scenario, it is evident that Pedro and Morgan have awarded themselves pay increases despite the fact the company is making marginal profits. As such, this would suggest a conflict of interest with the interest of the company. Moreover, the common law and equity impose duties on directors and section 179 of the CA expressly states that “the consequences of any breach… of sections 171 to 177 are the same as would apply if the corresponding common law rule or equitable principle applied”....
k v Deeks ([1916] 1 AC 554) asserted that directors cannot take advantage of an opportunity or information that belongs to the company without prior approval of the company. The common law fiduciary duty is further bolstered by the provisions of the Company Directors Disqualification Act 1986, where the courts can disqualify directors whose companies have failed as a direct result of their misconduct for periods up to 15 years. Moreover, under section 172 of the CA, there is a new duty deriving from the equitable fiduciary duty principle expressed as a duty to promote the success of the company. To this end, Section 172(1) sets out a non-exhaustive list of guidelines that directors should refer to including (without limitation) the relationship with suppliers and customers, impact of decision on environment and members of the company. It is important to ensure compliance with this and failure to comply cannot only result in exposing the company to potential claims, but can also lead to piercing of the corporate veil for potential actions against the director (Wild, 2009). Furthermore, section 173 of the CA 2006 imposes a positive duty on a director of a company to exercise independent judgment. Section 174(1) sets out the common law duty of care and skill and section 174(2) sets out an objective test similar to the dual obligations test extrapolated under section 214 of the Insolvency Act 1986 in relation to the wrongful trading provisions. In context of the current scenario, this will have a bearing in relation to the concerns regarding the sale of the company’s property at undervalue. Firstly, it is evident that the proposed sale of the company property must be in the best interests of the company under Section 172 of the CA 2006. If the sale at undervalue is not ...Download file to see next pages Read More
Share:
Tags
Cite this document
(“Company Law Essay Example | Topics and Well Written Essays - 750 words”, n.d.)
Retrieved from https://studentshare.org/law/1413618-1-ergan-arif-and-moshe-are-minority-shareholders-in-inco-ltd-all-three-of-them-are-unhappy-with-pedro-and-morgan-two-of-the

ch
chanceleffler added comment 1 year ago
Student rated this paper as
I had an issue with a essay types of works. All until I came across this website and this particular essay. Even though "Company Law" is far from my studies, the structure is so great that I use it all the time as an example for my own works.