Comments (0)
Add to wishlistDelete from wishlist
Cite this document
Summary
Donna Purcell Order# 545265 10 May 2011 Law: Five Controversial Argumentative Views That Constitute A Proper Aim of Law John Stuart Mills developed “the harm principle” which states that each individual has the right to act as he wants as long as these actions are not harmful to others…
Download full paperFile format: .doc, available for editing
HIDE THIS PAPERGRAB THE BEST PAPER98.6% of users find it useful 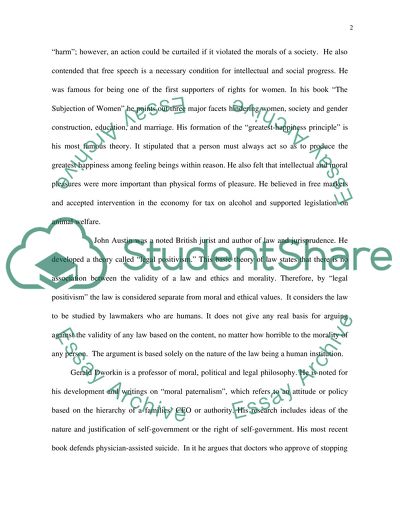 Download file to see previous pages Over himself, over his own body and mind, the individual is sovereign.” Mills was a British philosopher, economist and civil servant and a very influential contributor to the ideas of his time in social theory, political theory, and political economy. His concept of liberty gave complete control and freedom to the individual and opposed unlimited state control. Mills’ theory excuses persons who are “incapable of self-government” from this principle, such as young children or those living in “backward states of society.” Mills also felt that despotism (tyranny) is an acceptable form of government for societies that are “backward,” as long as the absolute ruler has the best interests of the people at heart. However, the theory has complications as “harms” may include actions that are omitted as well as acts of commission. Failing to rescue a drowning child or failing to pay taxes, both are harmful omissions that may be regulated by law. Mills did not think that offense constituted “harm”; however, an action could be curtailed if it violated the morals of a society. He also contended that free speech is a necessary condition for intellectual and social progress. He was famous for being one of the first supporters of rights for women. In his book “The Subjection of Women” he points out three major facets hindering women, society and gender construction, education, and marriage. His formation of the “greatest-happiness principle” is his most famous theory. It stipulated that a person must always act so as to produce the greatest happiness among feeling beings within reason. He also felt that intellectual and moral pleasures were more important than physical forms of pleasure. He believed in free markets and accepted intervention in the economy for tax on alcohol and supported legislation on animal welfare. John Austin was a noted British jurist and author of law and jurisprudence. He developed a theory called “legal positivism.” This basic theory of law states that there is no association between the validity of a law and ethics and morality. Therefore, by “legal positivism” the law is considered separate from moral and ethical values. It considers the law to be studied by lawmakers who are humans. It does not give any real basis for arguing against the validity of any law based on the content, no matter how horrible to the morality of any person. The argument is based solely on the nature of the law being a human institution. Gerald Dworkin is a professor of moral, political and legal philosophy. He is noted for his development and writings on “moral paternalism”, which refers to an attitude or policy based on the hierarchy of a families’ CEO or authority. His research includes ideas of the nature and justification of self-government or the right of self-government. His most recent book defends physician-assisted suicide. In it he argues that doctors who approve of stopping life support at the patient’s request, giving pain-relief medication that kills the patient, or who approves terminal sedation are inconsistent in condemning physician-assisted suicide. “Legal moralism” is a theory of jurisprudence which projects that laws may be used to prohibit or require a certain ...Download file to see next pagesRead More
Share:
Tags
Cite this document
(“Five Controversial Argumentative Views That Constitute a Proper Aim of Essay”, n.d.)
Retrieved from https://studentshare.org/law/1425198-argument-on-views
(Five Controversial Argumentative Views That Constitute a Proper Aim of Essay)
https://studentshare.org/law/1425198-argument-on-views.
“Five Controversial Argumentative Views That Constitute a Proper Aim of Essay”, n.d. https://studentshare.org/law/1425198-argument-on-views.
Comments (0)
Click to create a comment or rate a document

New and complex issues have arisen which demanded fresh understanding and handling of cases involved them. This has resulted in the enhanced development of specialized laws e.g. cyber laws and interpretation of those laws. The same is true with Media Laws. Media has developed much in the last half-century. As it evolved as a profession and more people started to join it, there arose the levels of money involved in it. With this grew the contractual obligations on the parts of parties and concerned laws e.g. patent laws, privacy laws, and copyrights laws, etc. also started to play their parts. With these issues, the role of law in the media industry also reached a new height.
Mathew Fisher, the appellant, joined a band with Mr...
6 Pages(1500 words)Assignment
sponsored ads
Save Your Time for More Important Things
Let us write or edit the essay on your topic "Five Controversial Argumentative Views That Constitute a Proper Aim of Law" with a personal 20% discount.
GRAB THE BEST PAPER

Let us find you another Essay on topic Five Controversial Argumentative Views That Constitute a Proper Aim of Law for FREE!