Comments (0)
Add to wishlistDelete from wishlist
Cite this document
Summary
Legal Issues The main legal issue is whether or not Alice’s will satisfies the formal requirements for making and altering a will pursuant to the relevant provisions of the Wills Act 1837. The validity of Alice’s will has significant consequences for the appointment and dispositions contained in the will…
Download full paperFile format: .doc, available for editing
HIDE THIS PAPERGRAB THE BEST PAPER94.8% of users find it useful 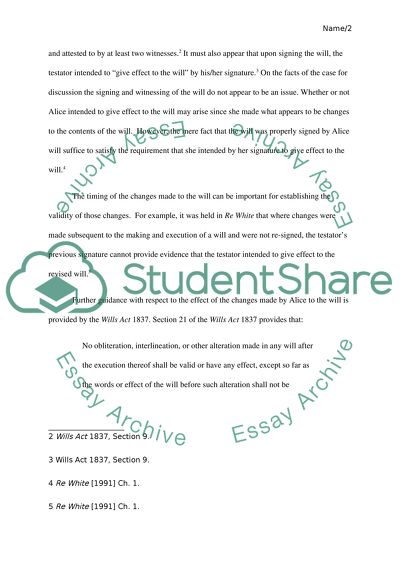 Download file to see previous pages Regardless of whether or not Alice’s estates pass under the rules of intestacy or as a testamentary disposition of property, Meg’s inheritance is also an issue as it appears that she died simultaneously with Alice and is survived by her son Phillip, who is presumably a minor and was a dependent of Meg’s. Thus the Inheritance (Provisions for Family and Dependents) Act 1975 may also affect the manner in which Alice’s property is divided, particularly as it relates to Meg’s inheritance. The Law, Legal Rules and Application of the Law to the Facts The formal requirements for making and/or rectifying a will are necessary for providing a method by which testators can dispose of their property as they wish in a way that either detects or prevents fraud.1 In this regard, Section 9 of the Wills Act 1837 provides that in order for a will to be valid it must be in writing, signed by the testator, and witnessed and attested to by at least two witnesses.2 It must also appear that upon signing the will, the testator intended to “give effect to the will” by his/her signature.3 On the facts of the case for discussion the signing and witnessing of the will do not appear to be an issue. Whether or not Alice intended to give effect to the will may arise since she made what appears to be changes to the contents of the will. However, the mere fact that the will was properly signed by Alice will suffice to satisfy the requirement that she intended by her signature to give effect to the will.4 The timing of the changes made to the will can be important for establishing the validity of those changes. For example, it was held in Re White that where changes were made subsequent to the making and execution of a will and were not re-signed, the testator’s previous signature cannot provide evidence that the testator intended to give effect to the revised will.5 Further guidance with respect to the effect of the changes made by Alice to the will is provided by the Wills Act 1837. Section 21 of the Wills Act 1837 provides that: No obliteration, interlineation, or other alteration made in any will after the execution thereof shall be valid or have any effect, except so far as the words or effect of the will before such alteration shall not be apparent, unless such alteration shall be executed in like manner as hereinbefore is required for the execution of the will...6 In other words, if a will is altered prior to its execution, the alteration will be deemed to be valid. However, where the alteration is made in the absence of attestation, it is presumed that the alteration was made after the execution of the will. However, this presumption can be rebutted by evidence such as sworn witness statements.7 Nevertheless, Section 21 of the Wills Act 1837 implies that when alterations are not apparent, it can be assumed that the alterations were made prior to the execution of the will. However, where the alterations and obliterations are obvious, it is best that the testator execute the alterations in same manner as the will is executed. It was held in Re Shearn’s Goods that where the testator’s signature together with witnesses’ signatures appear in the margin or anywhere near the alterations, the alteration will be valid and admitted to probate.8 On the facts of the case ...Download file to see next pagesRead More
Share:
Tags
Cite this document
(“Law issues Essay Example | Topics and Well Written Essays - 2500 words”, n.d.)
Retrieved from https://studentshare.org/law/1403312-testate-and-intestate-law
(Law Issues Essay Example | Topics and Well Written Essays - 2500 Words)
https://studentshare.org/law/1403312-testate-and-intestate-law.
“Law Issues Essay Example | Topics and Well Written Essays - 2500 Words”, n.d. https://studentshare.org/law/1403312-testate-and-intestate-law.
Comments (0)
Click to create a comment or rate a document

CHECK THESE SAMPLES OF Law issues

In th...
8 Pages(2000 words)Case Study
sponsored ads
Save Your Time for More Important Things
Let us write or edit the essay on your topic "Law issues" with a personal 20% discount.
GRAB THE BEST PAPER

Let us find you another Essay on topic Law issues for FREE!