Comments (0)
Add to wishlist Delete from wishlist
Cite this document
Summary
Name: University: Course: Tutor: Date: Do Anti-Trust Laws Hampering Business Competition, or Promote Competition: An Analysis of Recent High-Profile Cases The debate against, and for the promotion of anti-trust laws and their effect on the promotion or hampering of business competition has been a raging issue since the enactment of the laws…
Download full paper File format: .doc, available for editing
HIDE THIS PAPERGRAB THE BEST PAPER92.4% of users find it useful 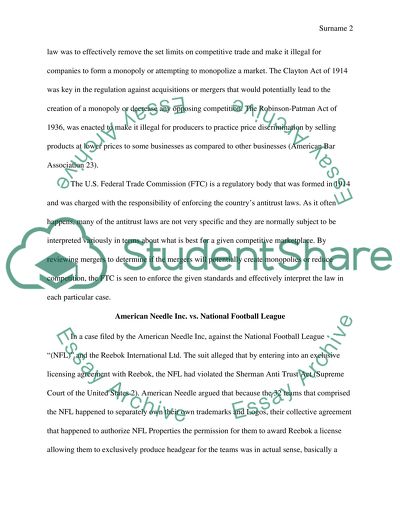 Download file to see previous pages These laws are designed to apply to both individuals and businesses. The laws are aimed at preventing the commitment of actions by one competitor that might have the effect of harming other businesses or the consumers. Some of these negative actions include the formation of monopolies, certain mergers between companies or some illegal cooperation’s that happen to be formed between some competing companies (Shapiro 41). U.S. Antitrust Laws In the United States, the first antitrust laws essentially came into being with the Sherman Antitrust Act of 1890, this law was formed to apply to interstate transactions. The basis of this law was to effectively remove the set limits on competitive trade and make it illegal for companies to form a monopoly or attempting to monopolize a market. The Clayton Act of 1914 was key in the regulation against acquisitions or mergers that would potentially lead to the creation of a monopoly or decrease any opposing competition. The Robinson-Patman Act of 1936, was enacted to make it illegal for producers to practice price discrimination by selling products at lower prices to some businesses as compared to other businesses (American Bar Association 23). The U.S. Federal Trade Commission (FTC) is a regulatory body that was formed in 1914 and was charged with the responsibility of enforcing the country’s antitrust laws. As it often happens, many of the antitrust laws are not very specific and they are normally subject to be interpreted variously in terms about what is best for a given competitive marketplace. By reviewing mergers to determine if the mergers will potentially create monopolies or reduce competition, the FTC is seen to enforce the given standards and effectively interpret the law in each particular case. American Needle Inc. vs. National Football League In a case filed by the American Needle Inc, against the National Football League “(NFL)” and the Reebok International Ltd. The suit alleged that by entering into an exclusive licensing agreement with Reebok, the NFL had violated the Sherman Anti Trust Act (Supreme Court of the United States 2). American Needle argued that because the 32 teams that comprised the NFL happened to separately own their own trademarks and Logos, their collective agreement that happened to authorize NFL Properties the permission for them to award Reebok a license allowing them to exclusively produce headgear for the teams was in actual sense, basically a conspiracy aimed at effectively restricting other vendors’ from being able to obtain licenses allowing them to produce the teams’ intellectual property. This suit by the American Needle Inc. was dismissed by the district court after it happened to disagree with the arguments. The American Needle Inc then proceeded to file an appeal in the U.S. Courts of Appeals, but the court of Appeals only affirmed the earlier decision by the district court. The Court of Appeals held that the NFL teams were actually recognized as a single entity for the purposes of aligning themselves with antitrust laws and as a result of this; they could not be deemed as having conspired to restrict trade. It is in this respect that the court ruled the verdict that the NFL constituent teams were legally free to license any of their intellectual property on a mainly exclusive basis to any party. The Case for Antitrust Laws in the American Need ...Download file to see next pages Read More
Share:
Tags
Cite this document
(“Do anti-trust laws hampering business competition, or promote Research Paper”, n.d.)
Retrieved de https://studentshare.org/law/1402530-12-do-anti-trust-laws-hampering-business-competition-or-promote-competition-an-analysis-of-recent-high-profile-cases

CHECK THESE SAMPLES OF Do anti-trust laws hampering business competition, or promote competition: An analysis of recent high-profile cases

On the other hand, these globalization standards are opposed by some critics and argue that globalization does not have to be a requirement for putting up a business in other countries, thus it is just a choice for entering a foreign market. Accordingly, standardization is applicable specifically to high-end markets and with accord to the market segmentation such as the trends that the young people patronize (Mullman, 2006) Regardless of the idea that globalization is mostly based on how the company standardizes the products, the home country still holds the profitability of the business as the economy affects how the foreign investors and other national sources back up the business (Stiglitz, 2006).
Making the world flat mak...
9 Pages (2250 words) Assignment
sponsored ads
Save Your Time for More Important Things
Let us write or edit the research paper on your topic "Do anti-trust laws hampering business competition, or promote competition: An analysis of recent high-profile cases" with a personal 20% discount.
GRAB THE BEST PAPER

Let us find you another Research Paper on topic Do anti-trust laws hampering business competition, or promote competition: An analysis of recent high-profile cases for FREE!