Comments (0)
Add to wishlistDelete from wishlist
Cite this document
Summary
As far as the work place discrimination is concerned, the 1976 Race Relations Act made it illegal for the employers to discriminate employees on racial grounds during the course of employment. …
Download full paperFile format: .doc, available for editing
HIDE THIS PAPERGRAB THE BEST PAPER97.1% of users find it useful 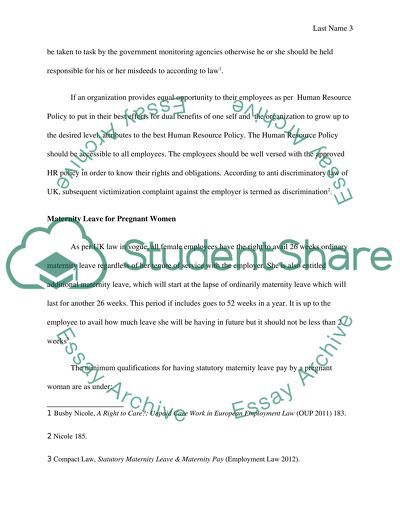 Download file to see previous pages Anti Discriminatory Act of UK As far as the work place discrimination is concerned, the 1976 Race Relations Act made it illegal for the employers to discriminate employees on racial grounds during the course of employment. The accountability against discrimination starts from submission of employment resume by the intending employee to the employer until severance of his or her job. It is immaterial whether the discrimination of an employer was intentional or unintentional. What matters is the attitude of the employer. Is it discriminatory or not. Has he or she treated you in an impartial and fair manner or not. If it treats fairly without any discrimination, he or she will not be taken to task by the government monitoring agencies otherwise he or she should be held responsible for his or her misdeeds to according to law1. If an organization provides equal opportunity to their employees as per Human Resource Policy to put in their best efforts for dual benefits of one self and the organization to grow up to the desired level, attributes to the best Human Resource Policy. The Human Resource Policy should be accessible to all employees. The employees should be well versed with the approved HR policy in order to know their rights and obligations. According to anti discriminatory law of UK, subsequent victimization complaint against the employer is termed as discrimination2. Maternity Leave for Pregnant Women As per UK law in vogue, all female employees have the right to avail 26 weeks ordinary maternity leave regardless of her tenure of service with the employer. She is also entitled additional maternity leave, which will start at the lapse of ordinarily maternity leave which will last for another 26 weeks. This period if includes goes to 52 weeks in a year. It is up to the employee to avail how much leave she will be having in future but it should not be less than 2 weeks3. The minimum qualifications for having statutory maternity leave pay by a pregnant woman are as under: a. Be an employee. b. Stopped work on account of pregnancy. c. Weekly income of the employees should not be less than the existing rate of National Insurance Contribution. Pregnant woman will be entitled for Statutory Maternity Pay (SMP) for a period of 39 weeks, which will start from the lapse of ordinary maternity leave. The either side may give notice for maternity leave to avail provided the pregnant employee provide medical certificate which indicates date of expected newly born baby. Under the mentioned scenario, the employee will be entitled two different rates to be paid during Ordinary Maternity Leave4. During the period of maternity leave, pregnant women will be offered two different slabs of payment under Statutory Maternity Pay. In addition to maternity leave, pregnant woman is also entitled normal perks that she receives along with other fringe benefits as usual for the employees. Apart from cited facilities if she got health care insurance, she will be benefited from that policy5. In case pregnant woman would like to resume her duties earlier than her sanctioned leave, she may do so provided she serves 8 weeks notice to the employer. Further, employees may seek parental leave for dependent or to use this right to have soft hours of working to meet the family commitment. In case pregnant woman decides not to go back to work at the end of maternity leave even then she will receive the full benefits of paid maternity leave provided she give notice to the emp ...Download file to see next pagesRead More
Share:
Tags
Cite this document
(“European Union Law Essay Example | Topics and Well Written Essays - 2250 words”, n.d.)
Retrieved from https://studentshare.org/law/1399029-european-union-law
(European Union Law Essay Example | Topics and Well Written Essays - 2250 Words)
https://studentshare.org/law/1399029-european-union-law.
“European Union Law Essay Example | Topics and Well Written Essays - 2250 Words”, n.d. https://studentshare.org/law/1399029-european-union-law.
Comments (0)
Click to create a comment or rate a document

In th...
8 Pages(2000 words)Case Study
sponsored ads
Save Your Time for More Important Things
Let us write or edit the essay on your topic "European Union Law" with a personal 20% discount.
GRAB THE BEST PAPER

Let us find you another Essay on topic European Union Law for FREE!