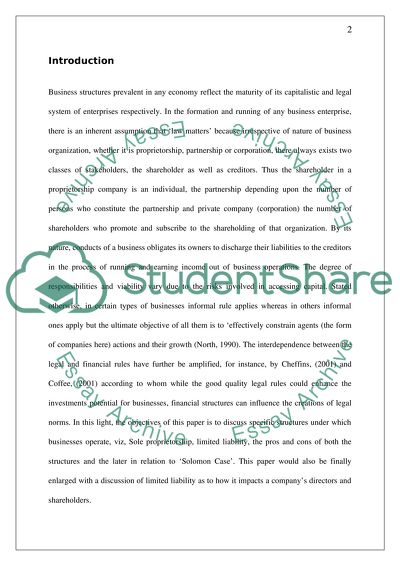 Download file to see previous pages Thus the shareholder in a proprietorship company is an individual, the partnership depending upon the number of persons who constitute the partnership and private company (corporation) the number of shareholders who promote and subscribe to the shareholding of that organization. By its nature, conducts of a business obligates its owners to discharge their liabilities to the creditors in the process of running and earning income out of business operations. The degree of responsibilities and viability vary due to the risks involved in accessing capital. Stated otherwise, in certain types of businesses informal rule applies whereas in others informal ones apply but the ultimate objective of all them is to ‘effectively constrain agents (the form of companies here) actions and their growth (North, 1990). The interdependence between the legal and financial rules have further be amplified, for instance, by Cheffins, (2001) and Coffee, (2001) according to whom while the good quality legal rules could enhance the investments potential for businesses, financial structures can influence the creations of legal norms. In this light, the objectives of this paper is to discuss specific structures under which businesses operate, viz, Sole proprietorship, limited liability, the pros and cons of both the structures and the later in relation to ‘Solomon Case’. This paper would also be finally enlarged with a discussion of limited liability as to how it impacts a company’s directors and shareholders. Discussion An Overview of the UK Corporate Sector The corporate structure of the UK business enterprises is influenced by a number of factors, such as access to bank borrowing, cash, non-debt tax shields, growth opportunities, profitability etc. Business structures are platforms through which capital, goods and persons carry out commercial transactions in a given space wherein the accessibility to capital and size have a distinct impact on the nature of the corporate forms in which such transactions are facilitated. While one can state that there are three broad choices, via, (i) sole proprietorships, (ii) partnerships (limited liability), (iii) corporations (private or public) for organizing and running of business enterprises. There are various other types of companies such as royal charter, industrial and provident society, company limited by guarantee, community interest company, etc. But proprietorship, partnerships and corporations are the three main types prevalent. Proprietorship Proprietorship businesses are characterized by single owners, at times a one person shows with limited or even the owner performing the role of an employee also. In such a case it acquires the form of self-employment whom for such a reason cannot be classified as real entrepreneurs. Proprietorship entities have certain advantages which makes it a most popular form of business enterprise. Some of such advantages are: a) It facilitates an easy formation because neither is there a need for complying with legal formalities nor any registration of the firm is needed; b) the owner comes up with the requisite capital which ordinarily gets generated either out of their savings and or through the reinvestment of profits generated; c) The owner has total control of the business operations which enables the ...Download file to see next pagesRead More
Share:
Tags
Cite this document
(“Company Law Essay Example | Topics and Well Written Essays - 4000 words”, n.d.)
Retrieved from https://studentshare.org/law/1398768-company-law
(Company Law Essay Example | Topics and Well Written Essays - 4000 Words)
https://studentshare.org/law/1398768-company-law.
“Company Law Essay Example | Topics and Well Written Essays - 4000 Words”, n.d. https://studentshare.org/law/1398768-company-law.
Comments (0)
Click to create a comment or rate a document

During these forty years, he set the tone for American landscape painting, which celebrated man’s relationship with nature and the wilderness it encompasses within. He helped to define an American sensibility about the land, setting it apart from European traditions. Durand’s influence hastened the decline of history painting in the mid 19th century and the rise in popularity of landscape paintings, which were increasingly considered great works of art. Durand was influenced by the British critic John Ruskin and advocated a naturalistic approach to landscape.

In th...
8 Pages(2000 words)Case Study
sponsored ads
Save Your Time for More Important Things
Let us write or edit the essay on your topic "Company Law" with a personal 20% discount.
GRAB THE BEST PAPER