Comments (0)
Add to wishlistDelete from wishlist
Cite this document
Summary
Public International Law Part I In instances where citizens of a state suffer gross human rights violations from their own government and the Security Council remains inactive, military intervention of another state is often the only hope for the suffering populations…
Download full paperFile format: .doc, available for editing
HIDE THIS PAPERGRAB THE BEST PAPER98.3% of users find it useful 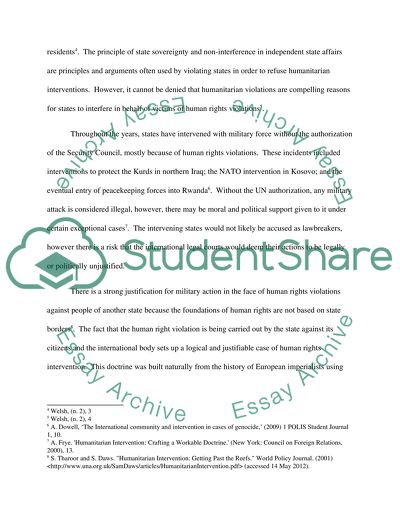 Download file to see previous pages The exact legal definition for what would constitute humanitarian intervention has a wide latitude of discretion in terms of interpretation. The variations in its application include distinctions on humanitarian interventions limited to instances where: there may not be any consent from the host state, in instances where the intervention is being used as a form of punishment, and where the intervention involves retaliation for actions where the UN Security Council is already acting on2. In general, humanitarian interventions include activities the application of military actions. It is an intervention which seeks to interfere with state authority through the deployment of military forces within the restricted land and airspaces of the violating state3. This intervention also usually involves situations which may not impact on state interests but on acts which have humanitarian overtones. The issue of humanitarian intervention has long been one of the main issues of international policy and related considerations, especially with various incidents of human rights violations perpetuated by states against their citizens and against other residents4. The principle of state sovereignty and non-interference in independent state affairs are principles and arguments often used by violating states in order to refuse humanitarian interventions. ...
Without the UN authorization, any military attack is considered illegal, however, there may be moral and political support given to it under certain exceptional cases7. The intervening states would not likely be accused as lawbreakers, however there is a risk that the international legal courts would deem their actions to be legally or politically unjustified. There is a strong justification for military action in the face of human rights violations against people of another state because the foundations of human rights are not based on state borders8. The fact that the human right violation is being carried out by the state against its citizens and the international body sets up a logical and justifiable case of human rights intervention. This doctrine was built naturally from the history of European imperialists using religious justifications in order to suppress the rights of their colonies9. These actions do not anymore apply to current times, however, the roots for humanitarian intervention can be understood clearly under these considerations. Humanitarian intervention is justified for a variety of reasons. One of its main purposes relate to the prevention of genocide and the mass murder of citizens by government actors. Research reveals that since the 1900s, governments have been able to carry out killings totalling up to 169,198,000 of their own citizens10. This number is actually a greater total than the lives lost in this century’s wars11. Humanitarian interventions have been carried out in some of these mass murders in order to stop the significant number of human rights abuses. In the case of Idi Amin of Uganda, ...Download file to see next pagesRead More
Share:
Tags
Cite this document
(“LAW2046 PUBLIC INTERNATIONAL LAW II Essay Example | Topics and Well Written Essays - 3000 words”, n.d.)
Retrieved from https://studentshare.org/law/1398575-law2046-public-international-law-ii

As a matter of fact, Hoffman’s statement that “international affairs is the nemesis of liberalism” has a grain of truth in it and this is especially so after the 9/11 incident.
There are two schools of thought or perspectives that are used to view international affairs: liberalism and realism. The study of these two perspectives is significant to the idea posed by Stanley Hoffman because they determine the reasons why international affairs, according to him, does not only see eye-to-eye with liberalism but seems to stand on the opposing side of it.
Liberalism can be defined as having four elements: citizens; the legislature; property rights, and; a market-driven economy (Dunne 186). Realism, on the othe...
6 Pages(1500 words)Assignment
sponsored ads
Save Your Time for More Important Things
Let us write or edit the essay on your topic "LAW2046 PUBLIC INTERNATIONAL LAW II" with a personal 20% discount.
GRAB THE BEST PAPER

Let us find you another Essay on topic LAW2046 PUBLIC INTERNATIONAL LAW II for FREE!