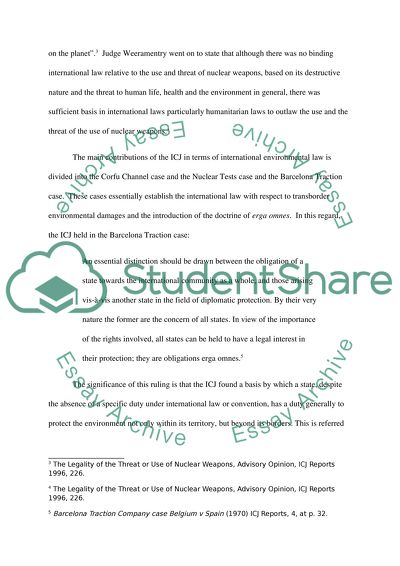 Download file to see previous pages In particular Judge Weeramantry discussed environmental issues relative to the threat and use of nuclear weapons. Judge Weeramentry specifically noted that the use of nuclear weapons “endangers the human environment in a manner which threatens the entirety of life on the planet”.3 Judge Weeramentry went on to state that although there was no binding international law relative to the use and threat of nuclear weapons, based on its destructive nature and the threat to human life, health and the environment in general, there was sufficient basis in international laws particularly humanitarian laws to outlaw the use and the threat of the use of nuclear weapons.4 The main contributions of the ICJ in terms of international environmental law is divided into the Corfu Channel case and the Nuclear Tests case and the Barcelona Traction case. These cases essentially establish the international law with respect to transborder environmental damages and the introduction of the doctrine of erga omnes. In this regard, the ICJ held in the Barcelona Traction case: An essential distinction should be drawn between the obligation of a state towards the international community ...Download file to see next pages Read More
Share:
Tags
Cite this document
(“Environmental Law Essay Example | Topics and Well Written Essays - 3500 words”, n.d.)
Retrieved from https://studentshare.org/law/1393196-environmental-law

In th...
8 Pages (2000 words) Case Study
sponsored ads
Save Your Time for More Important Things
Let us write or edit the essay on your topic "Environmental Law" with a personal 20% discount.
GRAB THE BEST PAPER