Comments (1)
Add to wishlist Delete from wishlist
Cite this document
Summary
This paper answers all question exhaustively in an organized manner. Knowledge gained in class has been used as well as works of extensive research. The language used in this assignment report is clear and coherent. The maximum number of word count has been observed and other instruction followed. …
Download full paper File format: .doc, available for editing
HIDE THIS PAPERGRAB THE BEST PAPER97.1% of users find it useful 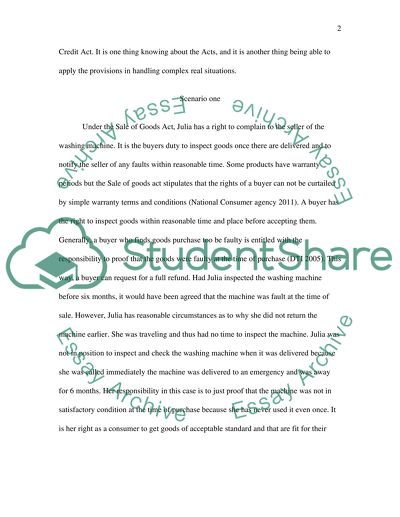 Extract of sample "Self Evaluation in Business law"

Download file to see previous pages The paper is done using the Harvard referencing system and proper in-text citation and bibliography is provided. There is also a list of appendices used in the research report. Familiar cases and ruling have been applied appropriately, for example the case of in liability for allergic reaction of goods purchased under the sale of goods agreement. Most importantly has been submitted in good time. Last but not least the answer provide in different question have demonstrated that reasonable reach has been conducted and there is understanding of the Sale of good Act of 1974 and the Consumer Credit Act. It is one thing knowing about the Acts, and it is another thing being able to apply the provisions in handling complex real situations.
Under the Sale of Goods Act, Julia has a right to complain to the seller of the washing machine. It is the buyers duty to inspect goods once there are delivered and to notify the seller of any faults within reasonable time. Some products have warranty periods but the Sale of goods act stipulates that the rights of a buyer can not be curtailed by simple warranty terms and conditions. A buyer has the right to inspect goods within reasonable time and place before accepting them. Generally, a buyer who finds goods purchase too be faulty is entitled with the responsibility to proof that the goods were faulty at the time of purchase. This way, a buyer can request for a full refund. Had Julia inspected the washing machine before six months, it would have been agreed that the machine was fault at the time of sale. However, Julia has reasonable circumstances as to why she did not return the machine earlier. She was traveling and thus had no time to inspect the machine. Julia was not in position to inspect and check the washing machine when it was delivered because she was called immediately the machine was delivered to an emergency and was away for 6 months. Her responsibility in this case is to just proof that the machine was not in satisfactory condition at the time of purchase because she has never used it even once. It is her right as a consumer to get goods of acceptable standard and that are fit for their purpose (National Consumer agency 2011). It is now Julia’s responsibility to act promptly. She can seek refund, replacement or repair under the sale of goods Act.
Oliver bought a luxury deep filled duck –down pillow so he would sleep well. However, he did not ask the sellers for man –made fibre pillow. The sellers were unaware of his allergy reactions to feather. Therefore, the sellers acted in good faith while selling Oliver the luxury pillow; he wanted to sleep well and he never told them about any problems with feather. The seller’s responsibility under consumer Act was to let the buyers know that the pillow had feather in it.
The case would have been different if Oliver had told the seller that he was allergic to feather. Then, he would have statutory rights to be compensated for the harm suffered and may get another feather free luxury pillow. The product was not faulty or defective, it is just that he was allergic and other buyers may be not allergic. In the case of Adelman-Tremblay V.Jewel Companies, Inc in 1988, it was ...Download file to see next pages Read More
Share:
Tags
Cite this document
(“Self Evaluation in Business law Essay Example | Topics and Well Written Essays - 2000 words”, n.d.)
Retrieved de https://studentshare.org/law/1392351-business-law

fs
fschroeder added comment 1 year ago
Student rated this paper as
I never thought 2250 words essay could be written in such a free manner. I loved the research of this essay. Will definitely use it for my own work!

CHECK THESE SAMPLES OF Self Evaluation in Business law

In this context, the Southampton Solent University’s existence as a business organization in the strategic business sense would be defined as a clear attempt at continuously engaging in the present and future activities with a view to achieving its long term objectives of which the satisfaction of stakeholders, particularly shareholders, is of paramount importance. Its mission statement is “The pursuit of inclusive and flexible forms of Higher Education which meet the needs of employers and prepare students to succeed in a fast-...
8 Pages (2000 words) Coursework
sponsored ads
Save Your Time for More Important Things
Let us write or edit the essay on your topic "Self Evaluation in Business law" with a personal 20% discount.
GRAB THE BEST PAPER

Let us find you another Essay on topic Self Evaluation in Business law for FREE!