Comments (0)
Add to wishlist Delete from wishlist
Cite this document
Summary
The issue in this question requires an analysis of the direct effect of directives and whether there can be horizontal direct effect of such directives. The doctrine of direct effect means that, subject to approval of certain conditions, rights and obligations which are created by EC law…
Download full paper File format: .doc, available for editing
HIDE THIS PAPERGRAB THE BEST PAPER91.7% of users find it useful 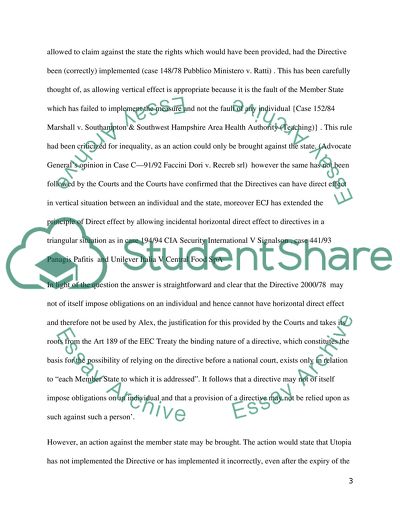 Download file to see previous pages The condition that needed to be satisfied for direct effect were also discussed which were that the provision must be clear and precise; it must be unconditional; and its operations must not be dependent upon further action by national or EC authorities. However, these requirements have been done away with by virtue of expiry of time and action by state. Direct effect in respect of Van Gend was allowed in respect of vertical relationship.
The question of direct effect of Directive having direct effect was problematic as Directives were designed so as to be implemented and brought into effect by member states within a stipulated period of time. Thus it had been thought Directive could not have direct effect as the condition in Van Gend of further implementing measures could not be satisfied.
In Case 41/74 Van Duyn Home Office , the court held that a directive could be relied upon an individual, even though it had not been introduced by the national law.
Thus where the Member State is at fault, by failing to transpose the Directive in national law or has done so inaccurately, the individual is allowed to claim against the state the rights which would have been provided, had the Directive been (correctly) implemented. This has been carefully thought of, as allowing vertical effect is appropriate because it is the fault of the Member State which has failed to implement the measure and not the fault of any individua.l {Case 152/84 Marshall v. Southampton & Southwest Hampshire Area Health Authority (Teaching)} . This rule had been criticized for inequality, as an action could only be brought against the state. (Advocate General’s opinion in Case C—91/92 Faccini Dori v. Recreb srl) however the same has not been followed by the Courts and the Courts have confirmed that the Directives can have direct effect in vertical situation between an individual and the state, moreover ECJ has extended the principle of Direct effect by allowing incidental horizontal direct effect to directives in a triangular situation as in case 194/94 CIA Security International V Signalson , case 441/93 Panagis Pafitis and Unilever Italia V Central Food SpA In light of the question the answer is straightforward and clear that the Directive 2000/78 may not of itself impose obligations on an individual and hence cannot have horizontal direct effect and therefore not be used by Alex, the justification for this provided by the Courts and takes its roots from the Art 189 of the EEC Treaty the binding nature of a directive, which constitutes the basis for the possibility of relying on the directive before a national court, exists only in relation to “each Member State to which it is addressed”. It follows that a directive may not of itself impose obligations on an individual and that a provision of a directive may not be relied upon as such against such a person’. However, an action against the member state may be brought. The action would state that Utopia has not implemented the Directive or has implemented it incorrectly, even after the expiry of the time limit that had been laid down and provided for by the directive and therefore the member state has breach its ...Download file to see next pages Read More
Share:
Cite this document
(“European Union Law Essay Example | Topics and Well Written Essays - 750 words”, n.d.)
Retrieved de https://studentshare.org/law/1390984-european-union-law

In th...
8 Pages (2000 words) Case Study
sponsored ads
Save Your Time for More Important Things
Let us write or edit the essay on your topic "European Union Law" with a personal 20% discount.
GRAB THE BEST PAPER

Let us find you another Essay on topic European Union Law for FREE!