Comments (0)
Add to wishlistDelete from wishlist
Cite this document
Summary
the DoctrIne of DIrect effect In eu law Introduction From the small six-member European Economic Community (EEC) to the current European Union (EU) with twenty-seven member-states, the signatories to the Treaty on European Union had struggled to integrate the general provisions of EU law into the legal system of member states…
Download full paperFile format: .doc, available for editing
HIDE THIS PAPERGRAB THE BEST PAPER91.4% of users find it useful 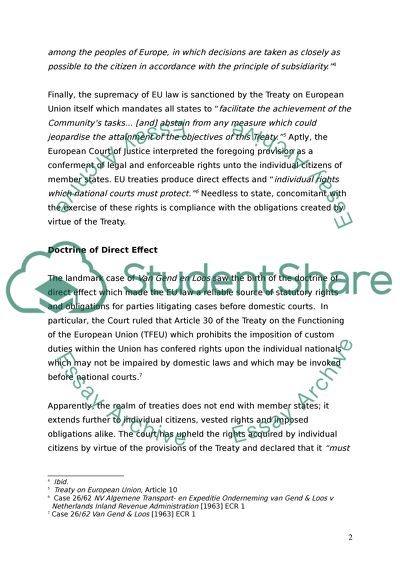 Extract of sample "Direct effect in the EU Law"

Download file to see previous pages This paper shall discuss the development of the doctrine of direct effect, the issues arising therefrom, and how the European Court of Justice resolved them. Moreover, it shall examine the dynamics in the relationship between the EU and the member-states and their individual citizens. Finally, it shall look into how the courts settle issues with regard to conflict arising from the implementation or non-implementation of EU laws and directives. Supremacy of EU Law The principle of supremacy of the EU law holds that in the event of conflict between the provisions of EU law and domestic law, the EU law shall prevail.1 This principle is anchored on the fact that when states signed the treaty creating the former EEC, the members had also signed off a part of their sovereignty to create a new sovereign that can bind both the state and its individual citizens.2 The Preamble of the Treaty on European Union declared in no uncertain terms that it aims to “establish a citizenship common to nationals of their countries”3 and create “an even closer union among the peoples of Europe, in which decisions are taken as closely as possible to the citizen in accordance with the principle of subsidiarity.”4 Finally, the supremacy of EU law is sanctioned by the Treaty on European Union itself which mandates all states to “facilitate the achievement of the Community’s tasks… [and] abstain from any measure which could jeopardise the attainment of the objectives of this Treaty.”5 Aptly, the European Court of Justice interpreted the foregoing provision as a conferment of legal and enforceable rights unto the individual citizens of member states. EU treaties produce direct effects and “individual rights which national courts must protect.”6 Needless to state, concomitant with the exercise of these rights is compliance with the obligations created by virtue of the Treaty. Doctrine of Direct Effect The landmark case of Van Gend en Loos saw the birth of the doctrine of direct effect which made the EU law a reliable source of statutory rights and obligations for parties litigating cases before domestic courts. In particular, the Court ruled that Article 30 of the Treaty on the Functioning of the European Union (TFEU) which prohibits the imposition of custom duties within the Union has confered rights upon the individual nationals which may not be impaired by domestic laws and which may be invoked before national courts.7 Apparently, the realm of treaties does not end with member states; it extends further to individual citizens, vested rights and imposed obligations alike. The court has upheld the rights acquired by individual citizens by virtue of the provisions of the Treaty and declared that it “must be interpreted as producing direct effects and creating individual rights which national courts must protect.”8 Van Gend en Loos became the controlling jurisprudence insofar as direct effect of treaties is concerned. However, subsequent cases had pushed the bar and thus expanded the doctrine’s application to include other forms of EU legislations. Seven years after the 1963 case of Van Gend en Loos, the Court ruled in the case of Grad v Finanzamt Traunstein that provisions of Council Decisions are also capable of “producing direct effects in the legal relationships between the member states to which the decision is addressed and those subject to their jurisdiction.” ...Download file to see next pagesRead More
Share:
Tags
Cite this document
(“Direct effect in the EU Law Essay Example | Topics and Well Written Essays - 2500 words”, n.d.)
Retrieved from https://studentshare.org/law/1401996-direct-effect-in-the-eu-law
(Direct Effect in the EU Law Essay Example | Topics and Well Written Essays - 2500 Words)
https://studentshare.org/law/1401996-direct-effect-in-the-eu-law.
“Direct Effect in the EU Law Essay Example | Topics and Well Written Essays - 2500 Words”, n.d. https://studentshare.org/law/1401996-direct-effect-in-the-eu-law.
Comments (0)
Click to create a comment or rate a document

CHECK THESE SAMPLES OF Direct effect in the EU Law

In th...
8 Pages(2000 words)Case Study
sponsored ads
Save Your Time for More Important Things
Let us write or edit the essay on your topic "Direct effect in the EU Law" with a personal 20% discount.
GRAB THE BEST PAPER

Let us find you another Essay on topic Direct effect in the EU Law for FREE!