Comments (0)
Add to wishlist Delete from wishlist
Cite this document
Summary
The assignment "Managing Employee Relations in Contemporary Organizations" identifies the management style used by ACME, discusses why they use this approach, evaluates the extent this style is made possible due to the changing context of British employee relations through the 1980s and 1990s. …
Download full paper File format: .doc, available for editing
HIDE THIS PAPERGRAB THE BEST PAPER91.8% of users find it useful 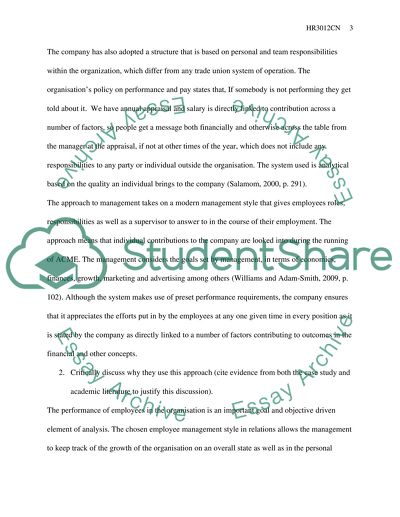 Download file to see previous pages The modern approach to employee relations is people management. The employees to the organization were employed based on their skill and as part of a team that would meet the requirements of the organization (Kessler and Purcell, 2003, p. 28).
Human management as a style that is used by the ACME organization concentrates on the skills that an individual brings into the company (Legge, 2005, p.102). Prior to securing a job with the company, it is important that what the employee brings to the table is analyzed and this is part of the enrolment (Purcell, 1987, p. 29). The company has stringent policies on which employees it employs, a fact that is expressed in different settings such as when referring to family, (Legge, 1995, p. 99), i.e. potentially some members may feel offended if they cannot get their friends/family in but so be it. We will never compromise the arrangement that we will go for the best person for the job. But with 500 people there are going to be individuals, but relatively few, we wouldn't recruit again. If one of these few recommended friends/family we would look, but look very carefully.
The company has also adopted a structure that is based on personal and team responsibilities within the organization, which differ from any trade union system of operation. The organization’s policy on performance and pay states that, If somebody is not performing they get told about it.  We have annual appraisal and salary is directly linked to contribution across a number of factors, so people get a message both financially and otherwise across the table from the manager at the appraisal, if not at other times of the year, which does not include any responsibilities to any party or individual outside the organization. The system used is analytically based on the quality an individual brings to the company (Salamom, 2000, p. 291). ...Download file to see next pages Read More
Share:
Tags
Cite this document
(Managing Employee Relations in Contemporary Organisations Assignment - 2, n.d.)
Managing Employee Relations in Contemporary Organisations Assignment - 2. Retrieved from https://studentshare.org/human-resources/1453489-hr3012cn-managing-employee-relations-in-contemporary-organisations-essay-two

CHECK THESE SAMPLES OF Managing Employee Relations in Contemporary Organizations

Empowerment is the authority to make decisions within one’s area of operation without having to get approval; from anyone else. Here the operatives are encouraged to use their initiative to do things the way they like. To this end, the employees are given not just authority but resources as well so that they not only take decisions but implement them quickly. This empowerment means giving the employees the authority to make decisions and providing them with financial resources to implement these decisions (Koch & Godden, 1997 11).
Employee participation and empowerment participation means sharing the decision making power with the lower ranks of an organization in an appropriate manner (Lashley & McGoldrick, 199...
9 Pages (2250 words) Assignment

In line with the proposition as to whether these operational managers discern ways of enacting responses from the relevant quarters when it comes to products, services, and their related operations, we see that their role is immense and they have to bring about activities right from scratch.
The change factor has to be studied in the light of a consistent basis since as the maxim goes change is the only constant, thus we have to understand the basis of change from that very point of view nonetheless. Managers have to see that the new products and/or services mark the very basis for an organization and it is because of these products/services that the company is moving in a swift manner in a forward direction. Thus all their e...
6 Pages (1500 words) Assignment

The type of employee supervision will depend totally on the management of the agency. This paper will discuss two commonly used models of employee supervision.
Employee Supervision can be defined as the process of the leader or senior management of an institution giving advice to junior staff on the policies, plans, and procedures of the institution. The leader advises on how to interpret and implement the plans, determining the extent to which they are being followed and advising his/her seniors thereof. Kalinich, Klofas, and Stolkovic, (2008, p. 54) define employee supervision as the process of coming up with personalized learning plans for the employees to be supervised as they deal with clients.
There is a number of...
7 Pages (1750 words) Assignment

... Topic: International People Management Lecturer: Presentation: Introduction Commitment is of paramount importance in virtually all aspects of organizational operations. Organizational culture is fundamental for employee commitment in any organization. In many situations, organizational culture fails to foster commitment among employees, which makes the committed employees an exclusive group. Contemporary organizations tend to lay off employees often due to their failure to accomplish the targeted goals. Employees on the other hand have a tendency of shifting from one employer to the other in search of satisfaction. In this set up, neither the employees nor the employers are contented. In essence, employee commitment means loyalty...
8 Pages (2000 words) Essay
sponsored ads
Save Your Time for More Important Things
Let us write or edit the assignment on your topic "Managing Employee Relations in Contemporary Organizations" with a personal 20% discount.
GRAB THE BEST PAPER

Let us find you another Assignment on topic Managing Employee Relations in Contemporary Organizations for FREE!