Comments (0)
Add to wishlistDelete from wishlist
Cite this document
Summary
There were oval tables that had multiple legs made from black walnut and white pines, others were made from black walnut, hard maple and white and…
Download full paperFile format: .doc, available for editing
HIDE THIS PAPERGRAB THE BEST PAPER91.1% of users find it useful 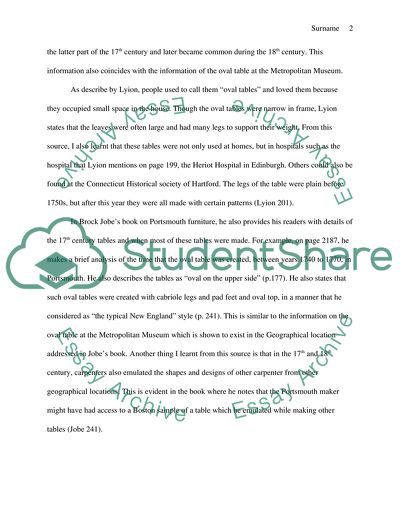 Phase 3: The “Oval Table with Falling Leaves” Given that it comes in many shapes and sizes, the oval table with falling leaves was created in the 17th century colonial America. There were oval tables that had multiple legs made from black walnut and white pines, others were made from black walnut, hard maple and white and yellow pine for drawers on the side. All of these tables can be found at the Metropolitan Museum of art, with different accession and gallery numbers. In this paper, I will focus on the oval table with falling leaves, from the Metropolitan Museum, made in 1909. This oval table dates back to the period between 1715 and 1740, created by using soft maple and Pine. Its accession number is 10.125.130, can be viewed in gallery 774.
Irvin Lyion, the author of an 18th century book on furniture provides the modern-day readers with the original details related to the object in the Metropolitan museum. Page 198, of his book shows that the oval table with falling leaves was sold in 1669, from a man known as Antipas Boyes from Boston. The location of the owner of the table coincides with the information at Metropolitan Museum, which shows that the table could be found from different geographical locations, such as Boston and New England, as note from the title of this book. From Lyion’s table, it is also clear that the table was on sale at a price of £ 3.10. It is also evident that tables with an oval top with falling leaves and at times with folding parts were fashionable in England for one of two decades (Lyion 199). As stated by Lyion, the tables were in existence in the latter part of the 17th century and later became common during the 18th century. This information also coincides with the information of the oval table at the Metropolitan Museum.
As describe by Lyion, people used to call them “oval tables” and loved them because they occupied small space in the house. Though the oval tables were narrow in frame, Lyion states that the leaves were often large and had many legs to support their weight. From this source, I also learnt that these tables were not only used at homes, but in hospitals such as the hospital that Lyion mentions on page 199, the Heriot Hospital in Edinburgh. Others could also be found at the Connecticut Historical society of Hartford. The legs of the table were plain before 1750s, but after this year they were all made with certain patterns (Lyion 201).
In Brock Jobe’s book on Portsmouth furniture, he also provides his readers with details of the 17th century tables and when most of these tables were made. For example, on page 2187, he makes a brief analysis of the time that the oval table was created, between years 1740 to 1770, in Portsmouth. He also describes the tables as “oval on the upper side” (p.177). He also states that such oval tables were created with cabriole legs and pad feet and oval top, in a manner that he considered as “the typical New England” style (p. 241). This is similar to the information on the oval table at the Metropolitan Museum which is shown to exist in the Geographical location addressed in Jobe’s book. Another thing I learnt from this source is that in the 17th and 18th century, carpenters also emulated the shapes and designs of other carpenter from other geographical locations. This is evident in the book where he notes that the Portsmouth maker might have had access to a Boston sample of a table which he emulated while making other tables (Jobe 241).
In conclusion, this research helps me to understand the use of the oval tables in the 17th and 18th century, the cost of the tables and why the buyers were find of these tables. These two sources have assisted me in knowing what other types of tables that people wanted in contemporary American society and their purpose. For example, the Trestle table, which is the first table at the bottom of the Museum web page almost, looks like a version of the oval table, but without the leaves. The table perhaps serves the same purpose as the oval table with falling leaves.
Picture of Oval Table with falling leaves
Source: The Metropolitan Museum of Art
Accession number: 10.125.130, on view in gallery 774.
Works Cited
Jobe, Brock. Portsmouth Furniture: Masterworks from the New Hampshire Seacoast. Boston: Society for the Preservation of New England Antiquities, 1993. .
Lyion, Irving. The colonial furniture of New England: A study of the domestic furniture in use in the seventeenth and eighteenth centuries. Boston, MA: Houghton Mifflin Harcourt, 1892. .
The Metropolitan Museum of Art. Oval Table with Falling leaves. 1909. Photograph. n.p. Web. . Read More
Share:
Tags
Cite this document
(“History phase 3 Essay Example | Topics and Well Written Essays - 500 words”, n.d.)
History phase 3 Essay Example | Topics and Well Written Essays - 500 words. Retrieved from https://studentshare.org/history/1666322-history-phase-3

CHECK THESE SAMPLES OF History phase 3

Culture, Behaviour and Management in field of Construction Project Management

...?Management: Phase 3 Discussion Board Heather Allen Colorado Technical Online Dr. John Richard Horne PM600 – 1302A – 02 April 24, Thesenior management of HLR Inc. in the last strategic planning meeting came to the realization that serious initiative had to be taken to ensure an intended growth of above 35% come the end of the next financial year. The focus would be on the untapped markets, enlargement as a company and coming up with plans for development. It was clear that there was lack of uniformity in the information set up of the organization. This resulted to inaccuracy and inefficiency. Potential business and customer information was also not well documented due to poor record keeping methods by the...
3 Pages(750 words)Assignment

Theories on the History of Science as Social Constructs

...as well as the social norms and concerns about position of women in economy. As she describes, this change has not been only a part of economical circle instead it has changed the social norms too. However, she mainly focuses on the requirement of elastic labour and availability of various positions that women can easily fulfil. Also, she goes back in history to explore the roots of this revolution in three evolutionary phases which she relates and manifests as the backdraft of revolutionary change. Although, the overall process seems more like a reform, Goldin asserts the final uplifts and change in women employment, education and family as revolutionary. There are number of reasons she sees behind...
2 Pages(500 words)Assignment

...Phase 3 Discussion Board Introduction Marketing is a fundamental management role concerned with the determination, sustenance and satisfaction of customer demands. By satisfying this, the marketing department in any organization sustains the profitability of the organization. The meeting with Michelle over the lunch break will therefore seek to answer fundamental questions that will help determine the future operations of the company. Marketing executives sit to analyze various issues that influence the position of a product or service and in so doing determines the profitability of the same. The situation becomes more challenging when it involves the introduction of a new product in an already existing...
4 Pages(1000 words)Assignment

...Risk Mitigation Strategies Risk Mitigation Strategies Strategies to mitigate risks are conceptualized action plans that are developed after a serious evaluation of the possible threats that can affect a business like for this case, the apple company. The main reason why the risk mitigation strategies are developed is to see to it that the possible threat impacts are reduced if not eliminated prior to the real damage occurs. In the best practice of these strategies, all the potential risks, both known and unknown are analyzed accordingly as per their level and possibility of impacts associated with the occurrence of the risk (Marlene, 2011). Risk mitigation strategies are divided into four: Risk Acceptance, Risk Avoidance, Risk... Mitigation...
2 Pages(500 words)Case Study

8 Pages(2000 words)Research Paper
sponsored ads
Save Your Time for More Important Things
Let us write or edit the essay on your topic "History phase 3" with a personal 20% discount.
GRAB THE BEST PAPER

Let us find you another Essay on topic History phase 3 for FREE!