Comments (0)
Add to wishlistDelete from wishlist
Cite this document
Summary
Republicans had an appreciable collection of hard money from its supporters between 1987 and 2012. Republicans had a great advantage over Democrats because of the complicated direct mail network. The direct mail…
Download full paperFile format: .doc, available for editing
HIDE THIS PAPERGRAB THE BEST PAPER96.7% of users find it useful 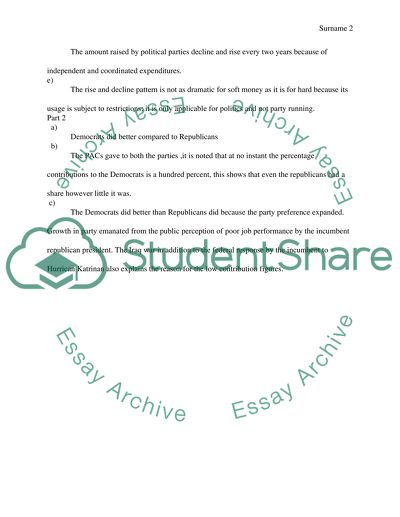 Extract of sample "CAMPAIGNS AND ELECTIONS"

Task: Campaigns and Elections Part a) Hard Money Republicans raised more hard money over the years than Democrats. Republicans had an appreciable collection of hard money from its supporters between 1987 and 2012. Republicans had a great advantage over Democrats because of the complicated direct mail network. The direct mail network served as a reliable source of hard money for the party. Democrats, however, passed Republicans in raising hard cash in 2012 because of internet fundraising (Center for Responsive Politics 1).
Soft money
Democrats raised a relatively high amount of soft money since 1991 until 2002 before the BCRA abolished soft money collection. Their contribution leveled off the deficit in hard money collection. The difference in soft money collection between the two parties, however, was insignificant.
b)
The Republicans hard money figures doubled the Democrats figures since 1987 to 2002. The gap narrowed in the year 2003. During the period between 2009 and 2010, democrats raised more hard money compared to Republicans. For the period between 2011 and 2012, the figures were relatively equal (Center for Responsive Politics 1). Soft money figures for Republicans were slightly higher Democrats’ figures over the years.
c)
There is a notable overall trend since the amount rose for both parties decline and then rise every two years.
d)
The amount raised by political parties decline and rise every two years because of independent and coordinated expenditures.
e)
The rise and decline pattern is not as dramatic for soft money as it is for hard because its usage is subject to restrictions; it is only applicable for politics and not party running.
Part 2
a)
Democrats did better compared to Republicans
b)
The PACs gave to both the parties ,it is noted that at no instant the percentage contributions to the Democrats is a hundred percent, this shows that even the republicans had a share however little it was.
c)
The Democrats did better than Republicans did because the party preference expanded. Growth in party emanated from the public perception of poor job performance by the incumbent republican president. The Iraq war in addition to the federal response by the incumbent to Hurrican Katrinan also explains the reason for the low contribution figures.
Work Cited
Center for Responsive Politics. Party Fundraising Totals by Cycle. OpenSecrets.Org. Web. March 5, 2014. Read More
Share:
Tags
Cite this document
(“CAMPAIGNS AND ELECTIONS Essay Example | Topics and Well Written Essays - 250 words”, n.d.)
CAMPAIGNS AND ELECTIONS Essay Example | Topics and Well Written Essays - 250 words. Retrieved from https://studentshare.org/history/1631778-campaigns-and-elections

CHECK THESE SAMPLES OF CAMPAIGNS AND ELECTIONS

...Task: Egyptian Elections In the recent two years, the Arab world has witnessed rapid-fire revolutions and protests taking the form of people setting themselves ablaze to violent wave of revolutions. Similarly, most Arab world citizens have shocked the world in their new consciousness toward critical issues such as human rights violations, extreme poverty, skyrocketing unemployment rates and massive government corruption among others. Among the nations that felt, what experts came to call Arab Spring, include Tunisia, Yemen, Libya and Egypt among others. Therefore, the main intention of this essay is to predict the person who will win the Egypt elections of May 23 and 24 while giving evidence on why the...
6 Pages(1500 words)Essay

...Campaign shows that President Obama carries a momentous, edge over former Massachusetts governor Mitt Romney in the battle for 270 electoral votes this fall, according to the first detailed analysis of the map conducted by the Fix ( Chris , and Aaron Blake ) Obama starts the general election with 15 states (plus the District of Columbia) and 196 electoral votes strengthen him while Romney begins with 21 states and 170 electoral votes firmly in his corner. (One of the states sturdily for Romney is Indiana, where Obama won in 2008 but no one expects a repeat performance in 2012). Another three states — Pennsylvania (20 electoral votes), Michigan (16) and New Mexico (5) — incline toward Obama while Arizona...
5 Pages(1250 words)Essay

...?Essay Integration of Money Spending on Contemporary Election Campaigns 0 Introduction Many would perceive that the way candi s presented themselves in the public can influence the election results (Stanton, Rosenberg, and McCafferty; Todorov et al. qtd. in Hoegg and Lewis 895). The commonalities of the contemporary election campaigns are probably aligned with the emergence of overspending money to influence the election results. The candidacy of the aspiring leaders is supported with wealth manifestations, leading one entity to project the output of election. This paper wishes to depict the pros and cons of utilizing...
6 Pages(1500 words)Essay

The Impact of the Internet on Political Campaigns and Elections

...? The impact of the internet on political campaigns and elections In this age of Marketing, social media marketing is one of the major tools to reachto the prospects and convince them to go for a product. In the scenario of elections, the political parties also take various strategies to convince the public to vote for them. Campaigns are a form of marketing strategies by the political parties to the general public. In today’s age of computers the political parties have taken attempts to reach the public through the internet because nowadays people spend a lot of their time on the internet. The internet has become one of the most popular sources for campaigning during elections and the most popular communication channel. Most... they want to...
3 Pages(750 words)Term Paper

...Voting, Campaigns, and Elections Voting is the act of casting one opinion regarding the right candidate to be in a governing body. The common notion that prevents people from stepping out on the day of elections is that one vote cannot change the outcome of the elections. It is part laziness and part ignorance that leads to such behavior. The people who do step out, too, believe that their vote is not likely to make a difference. The driving force behind their behavior is either their acceptance of the fact that it is their duty as a citizen, or because they support either parties and want to join in the zeal and fervor on the day of the elections....
3 Pages(750 words)Research Paper

...the softer side to him. Talks about his wife and how they had struggled to raise their children made him more “human”. At the Democrats’ convention, Barack Obama promised to reduce the national deficit and to reform the tax codes so that the wealthiest people would be the ones to pay the highest taxes. Obama also promised to end the Afghanistan war by 2014, and to reduce the cost of healthcare. However, in as much as Obama outlined energy, education, the national deficit, manufacturing, and national security as his goals if re-elected, he failed to specify how he would achieve such goals. Nevertheless, Obama made it clear that the process required a lot of sacrifices and that total reform was going to take “more than...
1 Pages(250 words)Assignment

Does Negative Attack Campaigns have an impact on US Presidential Elections

..., negative campaigning is harmful the country, and democracy, because it turns our country into a nation which is cruel and enjoys the suffering of others. He uses the example of FDR, who was a smoker, drinker, womanizer, and had serious health problems. He also was allegedly married to a lesbian, and had madness, alcoholism and scandal in his patrician family. Kamber (1997) argues that, because of all of FDR’s major faults, he could not get elected in the climate of negativity, because these flaws would be used against him. Kamber (1997) further makes the argument that negative campaigning depresses turnout because it makes the electorate cynical about the political process, figuring...
20 Pages(5000 words)Research Paper

...Business-to-Consumer Campaigns: NASA’s #GlobalSelfie al affiliation Business-to-Consumer Campaigns: NASA’s #GlobalSelfie National Aeronautics and Space Administration (NASA) organized this campaign in honor of five earth missions 2014. The idea behind the Earth’s day is to have the world come together in the fight for clean environment. In the celebration of 2014’s Earth Day, broadening the support base for global environment programs invited people to share selfies and post them on social media to share with humankind. The social media sites for the campaign were Facebook, Instagram, Flickr, Twitter, and Google+ (Sweeney & Craig, 2011). In these social media platforms,...
1 Pages(250 words)Assignment
sponsored ads
Save Your Time for More Important Things
Let us write or edit the essay on your topic "CAMPAIGNS AND ELECTIONS" with a personal 20% discount.
GRAB THE BEST PAPER

Let us find you another Essay on topic CAMPAIGNS AND ELECTIONS for FREE!