Comments (0)
Add to wishlistDelete from wishlist
Cite this document
Summary
From the beginning, the Zionist wanted to dispose of the Arab population so that Israel becomes a Jewish state. The Zionists is a form Jewish culture that supports the land of…
Download full paperFile format: .doc, available for editing
HIDE THIS PAPERGRAB THE BEST PAPER91.8% of users find it useful 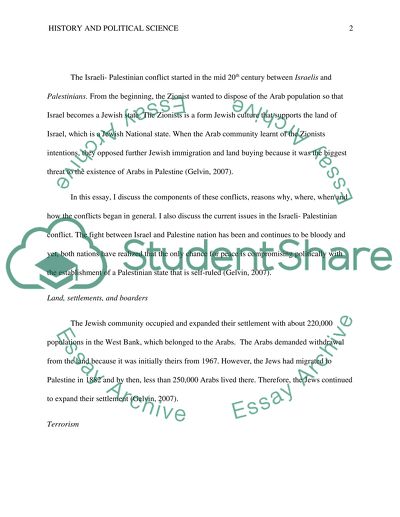 Extract of sample "Conflict Between Palestine and Israel"

Conflict between Palestine and Israel The Israeli- Palestinian conflict started in the mid 20th century between Israelisand Palestinians. From the beginning, the Zionist wanted to dispose of the Arab population so that Israel becomes a Jewish state. The Zionists is a form Jewish culture that supports the land of Israel, which is a Jewish National state. When the Arab community learnt of the Zionists intentions, they opposed further Jewish immigration and land buying because it was the biggest threat to the existence of Arabs in Palestine (Gelvin, 2007).
In this essay, I discuss the components of these conflicts, reasons why, where, when and how the conflicts began in general. I also discuss the current issues in the Israeli- Palestinian conflict. The fight between Israel and Palestine nation has been and continues to be bloody and yet, both nations have realized that the only chance for peace is compromising politically with the establishment of a Palestinian state that is self-ruled (Gelvin, 2007).
Land, settlements, and boarders
The Jewish community occupied and expanded their settlement with about 220,000 populations in the West Bank, which belonged to the Arabs. The Arabs demanded withdrawal from the land because it was initially theirs from 1967. However, the Jews had migrated to Palestine in 1882 and by then, less than 250,000 Arabs lived there. Therefore, the Jews continued to expand their settlement (Gelvin, 2007).
Terrorism
The Palestine groups that were involved in politically motivated violence were Hamas, Palestine Liberation Organization (PLO), Popular Front for the Liberation of Palestine – General demand (PFLP-GC), Abu Nidal Organization and others. Almost all of these groups were founded to destroy Israel using violence. However, in 1993 PLO group renounced their aim by signing the Oslo Declaration of Principles and agreed to Honor a resolution that recognizes Israel’s right of existence. In return, PLO entered West Bank and Palestinians gained control in this area. Groups that objected to these agreements started suicide bombings on Israel. Since 2000, Palestinians have killed thousands of Israelis in terror attacks and in defense; the Israelis have killed over 3,500 Palestinians (Gelvin, 2007).
Repression
At the beginning of the Oslo process, Israel responded to the violence started by Palestinians by cutting down the flow of workers from Palestine to Israel and strict checking at the boarder. The checkpoints made it difficult for Palestinians to work in Jerusalem or travel between their own towns. After year 2000, the Palestinian raids became severe and following this, Israel launched a defensive wall in West Bank. The Israel Defense Forces (IDF) added more checkpoints and kept towns under siege. The IDF has killed so many Palestinians and destroyed their property (Gelvin, 2007).
Water conflicts
Since capturing the West Gate and Gaza in 1967 Military orders 291 (1968) and 92 (1967) have been pursued by Israel to monopolize access of water in the Occupied Palestinian Territories (OPT) and denying Palestinians to drill or repair existing wells. The government of Israel views this compromising situation on water as a way to maintain its security, and it has become independent about the water upon the land it occupied. The government says that giving the Palestinians a fully-grown state would jeopardize Israel’s survival (Gelvin, 2007).
After the death of Yasser Arafat, a new era began in Palestinian- Israel relations. In a free, democratic election, Mahmud Abbas became the president of the Palestinian National Authority. He said he would put an end to these conflicts and negotiate peace with Israeli to withdraw from West Bank and Gaza. He has repeatedly declared that he will not use force against armed groups. He says that law enforcement will be maintained and that PNA will not condone chaos by the armed groups. However, conflicts between the two groups are ongoing mainly because of;
Corrupt government
Wide varieties of resources including some Palestinians have considered the Palestinian authority corrupt. They argue that it is unsuitable for governing the state because it provides support for militant movements and for this reason; organizations like Likud party are anti- Palestinian state (Gelvin, 2007). As a result, the violence from these conflicts has prompted security and human rights concerns between both sides and internationally. The ongoing violence has also curbed expansion of tourism.
References
Gelvin, J. L. (2007). The Israel-Palestine conflict: One hundred years of war. Cambridge [England: Cambridge University Press. Read More
Share:
Tags
Cite this document
(“Conflict Between Palestine and Israel Essay Example | Topics and Well Written Essays - 500 words”, n.d.)
Conflict Between Palestine and Israel Essay Example | Topics and Well Written Essays - 500 words. Retrieved from https://studentshare.org/history/1623537-conflict-between-palestine-and-israel

CHECK THESE SAMPLES OF Conflict Between Palestine and Israel

...Palestine-Israel Conflict Introduction: The history of the Arab world has been a stressful one. With the end of the Second World War it has been really challenging for the academia to neglect the conflicts between the Arab society and the Israel. The case of Palestine in particular has been more exigent. It is often confused with either a set of people or a nationality. Hence, writing about it implies going either against one party or another with reference to the self-determination that the small community has in pulling itself out of the shackles of the Zionist movement. The history goes as far as the time of Moses and...
13 Pages(3250 words)Essay

...? Solving the Israel-Palestine Conflict: Literature Review Presented Solving the Israel-Palestine Conflict: Literature ReviewMaoz (2013) argues that the dilemma regarding legitimacy in the Israel –Palestine dispute is made of three important ideologies. These are; the legitimate rights of the other, which has been denied for long periods; advocacy for self-legitimacy that has been the main struggle by the two fronts; the international legitimacy that historically has been divided between Muslim and Christian countries. Muslims back the Palestinian people, while the Western –Christian...
12 Pages(3000 words)Dissertation

Nigerias Position on the Palestinian-Israeli Conflict

...?Nigeria’s Position on the Palestinian-Israeli Conflict With the never ending conflict between Palestine and Israel, Nigeria has been one of the supporters to conduct peaceful settlements of the two countries. The country has always been pro-life and an advocate of peace. Nigeria will not take side in either of the two countries, instead, the country will support any peaceful settlement, justice, and solution to the clash of Palestine and Israel. According to S.A. Adekanye, the General Assembly in 2004 decided that the Palestinian issue must be settled on the basis of international legitimacy. The General Assembly reiterated that it is always illegal to acquire a territory by use of force or any threat and found that Israel has been...
2 Pages(500 words)Essay

...the political landscape. For example, the issue of Palestinian dispossession is a long-standing issue in the conflict and has in fact been central to human rights interventions in such hotbeds as the Gaza strip. Harms and Ferry write: “Over the course of the war, approximately 700,000 Palestinians fled or were forced from their homes and into Arab-held Palestine or the surrounding Arab countries. The remaining Arab population was distributed between Israel (150,000), the West Bank (400,000) and Gaza (60,000)” (99). What appears to be lesser known is the degree to which these dispossessions were Zionist policy. Harms and Ferry demonstrate that Arab transfer was a key...
8 Pages(2000 words)Research Paper

...?Israel-Palestine Conflict: Land Day The conflict between Israel and Palestine is deeply rooted in the origin of Zionist Movement (Jews) and the riseof Arab nationalism in the Middle Eastern Asia. To be specific, the innate urge of the Jews to create their own homeland in the Middle East, and the establishment of the same as a political movement eventually led to Israel-Palestine Conflict. The British victory over the Ottoman Turks (say, in the year 1917) and the British administration in Palestine helped the Jews to claim their authority over the Land of Israel. The declaration of the State of Israel (1948) created tension among the Israelis and the Palestinians in this region. So, the conflict between Israel and Palestine became... ...
5 Pages(1250 words)Essay

...? Introduction Israel and Palestine have always been in news for their fights, possession of lands and recently because of the escalating human rights crises. Some people root this conflict back to the period when Romans occupied the territory however, the conflict became intense in 19 century when Jews kicked out the Palestinian Muslims and established their state in the territory. Though the Israel is a registered country in the United Nations but many of the countries have yet not accepted it as an independent country and claim it as ‘Jewish Occupied Palestine’. Conflict The primary cause of the Israeli-Palestinian...
3 Pages(750 words)Essay

...Palestine-Israeli Conflict The constant conflict among these two nations has brought utter underdevelopment among these states. Israel, however, has had an upper hand in the conflict since it has enormous support from the United States. The United States, as a superpower, has also influenced the United Nations decisions and resolution. Palestine has, therefore, had a lopsided share of troubles. This essay seeks to compare and contrast the statistics presented in the website Ifamericansknew.com. The website details that the Israelis clearly have an upper hand in the conflict. To begin with, the number of Palestinian...
1 Pages(250 words)Essay

...Part 2: Order #1177226 Reply Based on the information that you have relayed regarding Israel-Palestine Conflict, I agree with you that its basis is no purely religious but those acting as instigators use creed to solicit support from the locals. This is by making them deem what they are doing is good and aligns with religion whereby in reality they are only agitating fiercely towards realizing interests of few. The tricky regarding somehow using religion as a basis by this conflict’s instigators is evident in Frisch’s study that you have cited and even confirmed by current information relayed by the media. Hence, religion in its sense serves the role of rallying masses...
1 Pages(250 words)Essay

...CONFLICT ANALYSIS OF ISRAEL PALESTINE By Conflict Analysis of Israel-Palestine CONFLICT ANALYSIS OF ISRAEL PALESTINEBy Name Institution Date Instructor Conflict Analysis of Israel-Palestine A Brief History of the Israeli-Palestinian Conflict Over the years, the Palestinian-Israeli conflict has been evolving around the problem of sharing land between the two states. However, the two nations generalize the conflict as a never ending conflict based on ancient and religious differences. This is based on the territorial context that involves land and resolving the border conflicts. In 1890’s, the Zionist leaders picked Palestine as the favorite place to erect a Jewish national home that could be the state for the Jews during a meeting... in 1947...
8 Pages(2000 words)Research Paper
sponsored ads
Save Your Time for More Important Things
Let us write or edit the essay on your topic "Conflict Between Palestine and Israel" with a personal 20% discount.
GRAB THE BEST PAPER

Let us find you another Essay on topic Conflict Between Palestine and Israel for FREE!