Discuss the contributions and struggles of African American soldiers during the wars of the late 19th and 20th century in general. Choose two engagements (WWI, WWII, Spanish American War, etc) to illustrate these struggles. Finally, discuss the African Am - Essay Example

Comments (0)
Add to wishlistDelete from wishlist
Cite this document
Summary
In this discussion, we will focus on World War I and World War II in discussing these contributions and struggles. World War I solidified the black community in…
Download full paperFile format: .doc, available for editing
HIDE THIS PAPERGRAB THE BEST PAPER94.8% of users find it useful 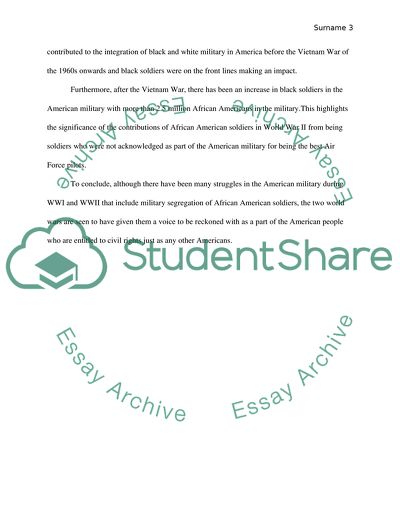 Extract of sample "Discuss the contributions and struggles of African American soldiers during the wars of the late 19th and 20th century in general. Choose two engagements (WWI, WWII, Spanish American War, etc) to illustrate these struggles. Finally, discuss the African Am"

Contributions and struggles of African American soldiers during the wars of the late 19thand 20thcentury First Submission Date
There are contributions and struggles of African American soldiers during the wars of the late 19thand 20thcentury. In this discussion, we will focus on World War I and World War II in discussing these contributions and struggles. World War I solidified the black community in the fight to make America democratic by offering full citizenship for its people. This saw about 370,000 African American men inducted into the army serving in World War I as American soldiers.1
This opportunity was used by black soldiers serving in segregated units in 1917 to protest against racial injustices. In addition, black political leaders used this war to sacrifice its race in return for the achievement of greater civil rights. Moreover, there were other contributions of the African American soldiers. During World War I, newly formed NAACP by black and whites, and other several organizations fought for the end of discrimination and segregation in the United States.2 The NAACP also worked tirelessly to destroy segregation through the courts and pursued voting rights to ensure black people had rights as other Americans.
During World War II, the military still maintained a racially segregated force with black soldiers classified as unfit for war and not allowed on the front lines, handling support duties and not allowed in white soldiers units. However, black soldiers still contributed to the war with black pilots joining the Air Force and in 200 missions never losing a bomber to enemy fire. This contributed to the integration of black and white military in America before the Vietnam War of the 1960s onwards and black soldiers were on the front lines making an impact.
Furthermore, after the Vietnam War, there has been an increase in black soldiers in the American military with more than 2.5 million African Americans in the military.This highlights the significance of the contributions of African American soldiers in World War II from being soldiers who were not acknowledged as part of the American military for being the best Air Force pilots.
To conclude, although there have been many struggles in the American military during WWI and WWII that include military segregation of African American soldiers, the two world wars are seen to have given them a voice to be reckoned with as a part of the American people who are entitled to civil rights just as any other Americans.
Bibliography
Voice of America. African-American Soldiers in World War II Helped Pave Way for Integration of US Military. (October 2009). Accessed March 26, 2013.
http://www.voanews.com/content/a-13-2005-05-10-voa47-67929177/396374.html
Williams, Chad. African Americans and World War I. (N.d). Accessed March 26, 2013.
http://exhibitions.nypl.org/africanaage/essay-world-war-i.html Read More
Share:
Tags
Cite this document
(“Discuss the contributions and struggles of African American soldiers Essay”, n.d.)
Retrieved from https://studentshare.org/history/1619060-discuss-the-contributions-and-struggles-of-african-american-soldiers-during-the-wars-of-the-late-19th-and-20th-century-in-general-choose-two-engagements-wwi-wwii-spanish-american-war-etc-to-illustrate-these-struggles-finally-discuss-the-african-am

“Discuss the Contributions and Struggles of African American Soldiers Essay”, n.d. https://studentshare.org/history/1619060-discuss-the-contributions-and-struggles-of-african-american-soldiers-during-the-wars-of-the-late-19th-and-20th-century-in-general-choose-two-engagements-wwi-wwii-spanish-american-war-etc-to-illustrate-these-struggles-finally-discuss-the-african-am.
Comments (0)
Click to create a comment or rate a document

CHECK THESE SAMPLES OF Discuss the contributions and struggles of African American soldiers during the wars of the late 19th and 20th century in general. Choose two engagements (WWI, WWII, Spanish American War, etc) to illustrate these struggles. Finally, discuss the African Am

...﻿African-American Struggles Exemplified in Literature The piece that most spoke to me on the topic of African-American struggles that we have read so far was Frederick Douglass' “My Escape from Slavery”. Douglass is a well-known writer from the African-American and slave communities; he was a living testament to the fact that there is no difference in intellect or mental capacity between the races. He wrote a number of autobiographies about his life as a slave, as well as being the editor of abolitionist newspapers and giving speeches. The tone of the essay “My Escape from Slavery” is extremely...
2 Pages(500 words)Essay

The Impact of the Two World of Black America

...as it had been during WWI. Two essential changes during WWII created a foundation for cautious optimism about the future of racial equality in America. First, a dramatic change in racial policies within the War Department took place in 1943: following the resignation of one of the military leaders, the AAF finally recognized there was no definite reason not to employ Negro Service Pilots (Osur 1977). The AAF also expressed its opinion regarding previous segregation policies: even if the military had been skeptical about Blacks’ ability to contribute to the national army, the AAF had not intended to...
9 Pages(2250 words)Essay

...?Famous African American of the 20th Century- Martin Luther King   Martin Luther King was born on 15th January 1929 and was assassinated on 4th April1968 in Memphis, Tennessee. He was a Black American who is an idol in the history of American Liberalism. A high flying leader in the African-American Civil Rights Movement, King is renowned for his achievements in civil rights not only in America but throughout the world, by means of nonviolent techniques and civil disobedience. Throughout the time of his service he wrote many masterpieces and delivered historic sermons and speeches. His “Letter from...
5 Pages(1250 words)Research Paper

...prosperity than most of the whites and they gained without sacrificing their pride, dignity and identity (Ciment 151). This helped to shape the direction of the postwar American history. In the 1940s and 1950s, successful African Americans showed their worth through their success in print, on the athletic field and on stage. The leaders demanded for the African Americans rights as citizens. In the mid-1960s, the younger and more vivid generation (and the older generation included) of the black leaders emerged to challenge the white resistance (Ciment 152). The Great Migration The racial structure of the United States’...
5 Pages(1250 words)Research Paper

...Other (s) Twentieth Century African-American Artists The works of the two 20th century African American artists, Romare Bearden and Jacob Lawrence had a number of similarities as well as some contrasting differences. Firstly, Bearden illustrated cartoons in the Baltimore Newspaper. Cartoons up-to-date are still influential in newspapers and his art work became the most original and famous in architecture due to his isolation working methods in art. On the other hand, Jacob Lawrence’s art work spoke and embodied the values of self-driven critical powers of modernism. With regard to the...
1 Pages(250 words)Case Study

...oppression for the period from 1865 to 1941, that is, Reconstruction and the time of Jim Crow, and identify how blacks adopted various strategies to resist the onslaught. The Civil War was disastrous for the South. Lasting from 1861 until 1865, it killed a considerable number of people, and devastated the Southern aristocracy in all means. As the Thirteenth Amendment was accepted, the blacks became a freed lot instantaneously. They eagerly started pursuing everything the free people did. For example, they started political actions, opened churches and schools, bought arms, drank liquor, and owned dogs. Though there was the call for a New South, there was no significant improvement in the condition of the...
4 Pages(1000 words)Essay

The Struggles of African Slaves

...the danger of unknown future and accept possible horrifying revenge of a master in case the rebellion failed? The answer is simple, and it is freedom. African folks have lived through complete discrimination and abasement during the times of slavery. The film “Sankofa” by Haile Gerima which was shot in 1993 displays the process and practice of discrimination of Africans. We may vividly see what tortures they underwent and what sufferings they experienced. The main storyline of the film dwells upon a contemporary African American model Mona who gets to the past and lives a life of a house slave servant Shola. The first thing that catches the eye of a...
4 Pages(1000 words)Essay

...grew faster with its laws that were taken up for use by the political as well as commercial rulers, mainly because of the emergence of the Byzantine into this region. There is also the contribution of the Red Sea route trade, directly from Mecca and Medina, which led to the growth of civilization in the region. 5. Describe the practice of slavery in the late ninth century in various Islamic civilizations. How did emerge? How was the practice viewed by Muslims? What were distinctive features? How was the African slave trade different from the Turkish slave economy? The Islamic civilization form of slavery was considered to differ from the American form...
5 Pages(1250 words)Essay
sponsored ads
Save Your Time for More Important Things
Let us write or edit the essay on your topic "Discuss the contributions and struggles of African American soldiers during the wars of the late 19th and 20th century in general. Choose two engagements (WWI, WWII, Spanish American War, etc) to illustrate these struggles. Finally, discuss the African Am" with a personal 20% discount.
GRAB THE BEST PAPER

Let us find you another Essay on topic Discuss the contributions and struggles of African American soldiers during the wars of the late 19th and 20th century in general. Choose two engagements (WWI, WWII, Spanish American War, etc) to illustrate these struggles. Finally, discuss the African Am for FREE!