Comments (0)
Add to wishlistDelete from wishlist
Cite this document
Summary
A person may differ from the neighbour in many ways. This might lead to a tense relationship between neighbours. The tension might build up and if ignored it may cause damages between…
Download full paperFile format: .doc, available for editing
HIDE THIS PAPERGRAB THE BEST PAPER92.7% of users find it useful 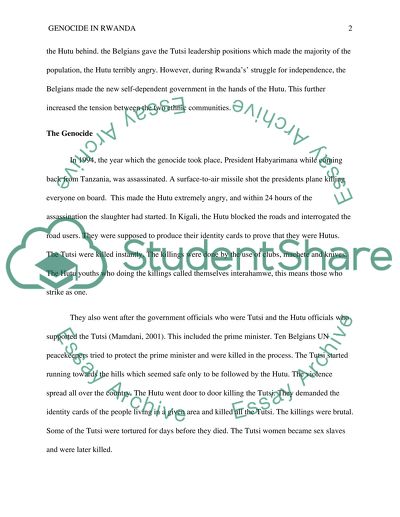 Extract of sample "Summary about the Rwanda Genocide"

Introduction People notice that they have a difference in opinions in the day to day interactions. A person may differ from the neighbour in many ways. This might lead to a tense relationship between neighbours. The tension might build up and if ignored it may cause damages between neighbours. This essay will focus on one of the most inhumane episodes the world has ever witnessed. The 1994 genocide in Rwanda happened in 100 days leaving scores of people injured, separated and the majority of its victims dead. Hundreds of thousands died during these 100 days. The cause of the genocide has been attributed to the tension between two ethnic groups. The majority called Hutu and the minority the Tutsi. Tutsi held the majority of the political power despite their small population as compared to the Hutu.
The Colonial Era
In 1984, the Germans became the first colonial power in Rwanda. They realized that the Tutsi had light skins, and they were tall. To the Germans, the characteristics resembled Europeans hence they favoured them in issuing responsibilities. The First World War made the Germans lose their colonies including Rwanda (Mamdani, 2001). Belgium took over Rwanda and introduced the identity cards. The Tutsi continued to receive favour from the Belgians, leaving the Hutu behind. the Belgians gave the Tutsi leadership positions which made the majority of the population, the Hutu terribly angry. However, during Rwanda’s’ struggle for independence, the Belgians made the new self-dependent government in the hands of the Hutu. This further increased the tension between the two ethnic communities.
The Genocide
In 1994, the year which the genocide took place, President Habyarimana while coming back from Tanzania, was assassinated. A surface-to-air missile shot the presidents plane killing everyone on board. This made the Hutu extremely angry, and within 24 hours of the assassination the slaughter had started. In Kigali, the Hutu blocked the roads and interrogated the road users. They were supposed to produce their identity cards to prove that they were Hutus. The Tutsi were killed instantly. The killings were done by the use of clubs, machete and knives. The Hutu youths who doing the killings called themselves interahamwe, this means those who strike as one.
They also went after the government officials who were Tutsi and the Hutu officials who supported the Tutsi (Mamdani, 2001). This included the prime minister. Ten Belgians UN peacekeepers tried to protect the prime minister and were killed in the process. The Tutsi started running towards the hills which seemed safe only to be followed by the Hutu. The violence spread all over the country. The Hutu went door to door killing the Tutsi. They demanded the identity cards of the people living in a given area and killed all the Tutsi. The killings were brutal. Some of the Tutsi were tortured for days before they died. The Tutsi women became sex slaves and were later killed.
During the genocide, the Tutsi people tried to seek refuge in churches, schools and other institutions. These places were to become places of mass murders. The Hutu used grenades to kill the Tutsi who sheltered themselves inside these buildings. The Tutsi who tried to escape from the buildings were slaughtered with machetes, knives and clubs. The bodies of the Tutsi were not buried (Mamdani, 2001). They were either left where they were slaughtered or thrown into rivers. This was because the Hutu believed that the Tutsi had originally migrated from Ethiopia.
Conclusion
In July 1994, the Rwanda Patriotic Front took over the government. The group consisted of trained military group who had been exiled in earlier years. They were in the neighbouring country of Uganda. By mid-July the genocide had ended.
References
Mamdani, M. (2001). When Victims Become Killers: Colonialism, Nativism, and the Genocide in
Rwanda. Princeton university press, New Jersey USA Read More
Share:
Tags
Cite this document
(“Summary about the Rwanda Genocide Essay Example | Topics and Well Written Essays - 500 words”, n.d.)
Retrieved from https://studentshare.org/history/1608329-summary-about-the-rwanda-genocide

CHECK THESE SAMPLES OF Summary about the Rwanda Genocide

.... As such, the Holocaust was largely about ideology rather than retribution. Just like the Holocaust, Rwandan genocide remained engineered by the regime plus its elites and driven by local authorities and undertaken by the public. The Holocaust and Rwanda genocide share several similarities, especially in presenting an effective paradigmatic frame for conceptualizing the horror and cruelty of genocide. From a historical approach, the genocides perpetrated by Nazis in 1941 and Hutus in 1994 coincide, in the systematic annihilation of ethnic groups perceived to be inferior (Hintjens 1999, p.242). One can critically point out the presence...
13 Pages(3250 words)Essay

Genocide Of either Holocaust or the Rawnda

...? The Gore and Logic in the Rwandan Genocide “It almost seemed as if, with the machete, the nail-studded club, a few well-placed grenades, and a few bursts of automatic rifle fire, the quiet orders of Hutu Power had made the neutron bomb obsolete,” wrote Philip Gourevitch (cjr.org) Such was the observation of an American reporter from The New Yorker about the genocide in Rwanda. Gourevitch was dispatched in Rwanda on May of 1994 just a month after the Rwandan Genocide broke out. Perhaps, he was the first one–foreigner at that–to have set foot in Rwanda. His first-hand experience made his in-depth story very compelling....
4 Pages(1000 words)Essay

...?English 1A August 2, The Rwanda Genocide Xenophobia, the hatred or fear of certain targeted ‘outsiders,’ is one of the most destructive group phenomena in human history. Various incidents in our collective past portray how xenophobia has negatively impacted the lives of so many people. One of the most outright and horrific displays of this destructive force was seen in the German treatment of the Jewish race before and during the Second World War. These events were part of the holocaust, associated with the Nazi notions of racial superiority especially in contrast with their notion of Jewish inferiority. Racial superiority has caused much violence and many deaths for those who have been labeled by the ‘superior’ as ‘inferior... , but none...
8 Pages(2000 words)Essay

...? Rwanda Genocide Violence and wars happened in the of history of the earth and human civilization. They occur due to many factors like poverty, political disputes, cultural wars, group conflicts, scarcity of resources and many more. The reasons for those occurrences may differ but they all boil down into further hatred and hardships. Many efforts are being done by various groups, sectors and organizations to prevent any violence to occur as to provide peaceful liberties to people and guard their rights. Though efforts are done, those harms do still happen in controlled settings. Mutual understanding among nations and people may have reduced the occurrences of conflicts and violence. Conflicts and...
6 Pages(1500 words)Research Paper

Genocide in Rwanda and Burondi

...includes any of the following action: acts committed with intent to destroy, in whole or in part, a national, ethnical, racial or religious group, as such: (a) Killing members of the group; (b) Causing serious bodily or mental harm to members of the group; (c) Deliberately inflicting on the group conditions of life calculated to bring about its physical destruction in whole or in part; (d) Imposing measures intended to prevent births within the group; (e) Forcibly transferring children of the group to another group. The crime of Genocide in Rwanda Politics and ambition started it all. The first conviction of Genocide was given in 1988 by the International Criminal Court...
8 Pages(2000 words)Assignment

... twentieth Century. Most of the critics have claimed that ides have been borrowed from foreign occurrences and do not reflect the Rwandese experience. Others have even gone as far as claiming that the genocide memorials show how Rwanda is still experiencing post colonialism and is not free to express itself. This is because they feel that the whole arrangement was designed to woo audiences from the West- these mostly include tourists. Other observers have been quite positive about the whole idea. One such tourist was Caplan, an anthropologist and a lecturer in a University in London. She praises the way the pieces were displayed and claims that she can identify with them personally. She also Feels that the work was professional... this...
16 Pages(4000 words)Essay

...Genocide in Rwanda Yvonne L. Academia Research In between 1992-1994, Rwanda saw the mass murder of its citizens as a by-product of political and economic domination over the entire African continent. New evidence has emerged of the deep knowledge and involvement of the major capitalists like France, Belgium and the United States. This paper intends to retrace the failures of these countries in preventing the bloody genocide that killed almost a million Rwandans in an effort to gain knowledge for future study on the catastrophic effects of supreme political greed. Introduction As we browse deeper into the annals of our history, we cannot simply...
14 Pages(3500 words)Essay

...Rwanda Genocide Lecturer Rwanda Genocide Xenophobia, the hatred or fear of certain targeted ‘outsiders,’ is one of the most destructive group phenomena in human history (Adorno and Horkheimer, 2000, p. 214). Various incidents in our collective past portray how xenophobia has negatively affected the lives of so many people. Racial superiority has caused much violence and many deaths for those who have been labeled, by the ‘superior’, as ‘inferior’, which has been spawned mostly by an extreme hatred for those viewed as different or inferior. Such acts of violence have resulted into massacres and other similar inhuman activities. Concerned countries of the world have...
2 Pages(500 words)Essay

...between Hutu and Tutsi, just to name a few. Ethnicity especially has been used as criteria for inclusion and exclusion in regards to distribution of national resources. Ethnicity is not a phenomenon that is only experienced in Africa and this is mainly because most societies in the world suffer from incipient ethnic hostilities and a recognizable number of the world community experience open ethnic conflagrations. Ethnic conflicts come about as an end result of insufficiency of resources, political dissatisfaction, and militarization of ethnicity among others. It is because of these aspects that ethnic conflict in Rwanda that led to the genocide should not be ignored because to do so...
9 Pages(2250 words)Thesis
sponsored ads
Save Your Time for More Important Things
Let us write or edit the essay on your topic "Summary about the Rwanda Genocide" with a personal 20% discount.
GRAB THE BEST PAPER

Let us find you another Essay on topic Summary about the Rwanda Genocide for FREE!