Comments (0)
Add to wishlistDelete from wishlist
Cite this document
Summary
Human civilization can be traced back to the Greece, Greco-Roman ancient times and medieval Europe. Modern art and architecture adapted many styles and ideas from ancient Greece and Rome, and medieval Europe. Greece is the hub of all modern cultures. …
Download full paperFile format: .doc, available for editing
HIDE THIS PAPERGRAB THE BEST PAPER91.2% of users find it useful 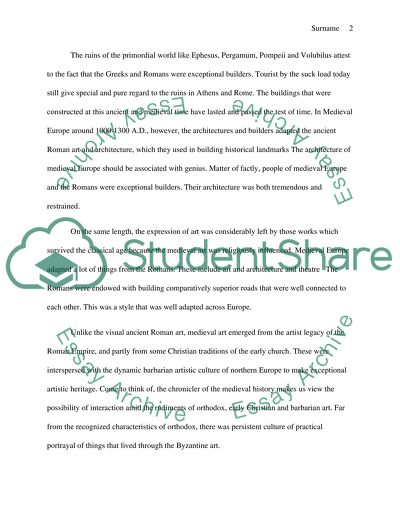 Revised Human civilization can be traced back to the Greece, Greco-Roman ancient times and medieval Europe. Modern art and architecture adapted many styles and ideas from ancient Greece and Rome, and medieval Europe. Greece is the hub of all modern cultures. Without doubt, both medieval Europe and Rome had similar sense of art. In the same context, it was medieval Europe that adopted art from the Romans, who on the other hand, borrowed art from the Greeks. This comparative paper seeks to compare and contrast the early civilization of ancient Greece with that of Greco Rome, and/or otherwise.
The Greeks were purely democratic; they had no single leader but were instead ruled by the oligarchy that was elected by the common man. Conversely, the Roman government system was primed on semi-democracy. They had a ruling senate, which comprised of wealthy magnates. Moreover, the political power of the Romans was wholly in the hands of a solitary monarch.
The ruins of the primordial world like Ephesus, Pergamum, Pompeii and Volubilus attest to the fact that the Greeks and Romans were exceptional builders. Tourist by the suck load today still give special and pure regard to the ruins in Athens and Rome. The buildings that were constructed at this ancient and medieval time have lasted and passed the test of time. In Medieval Europe around 1000-1300 A.D., however, the architectures and builders adapted the ancient Roman art and architecture, which they used in building historical landmarks The architecture of medieval Europe should be associated with genius. Matter of factly, people of medieval Europe and the Romans were exceptional builders. Their architecture was both tremendous and restrained.
On the same length, the expression of art was considerably left by those works which survived the classical age because the medieval art was religiously influenced. Medieval Europe adapted a lot of things from the Romans. These include art and architecture and theatre The Romans were endowed with building comparatively superior roads that were well connected to each other. This was a style that was well adapted across Europe.
Unlike the visual ancient Roman art, medieval art emerged from the artist legacy of the Roman Empire, and partly from some Christian traditions of the early church. These were interspersed with the dynamic barbarian artistic culture of northern Europe to make exceptional artistic heritage. Come to think of, the chronicler of the medieval history makes us view the possibility of interaction amid the rudiments of orthodox, early Christian and barbarian art. Far from the recognized characteristics of orthodox, there was persistent culture of practical portrayal of things that lived through the Byzantine art.
Romans and Greeks were great lovers of theatre; the ancient Greek theatre was concerned with tragedy, which depicted the downfall of great men and women. The Greeks also showed lewd comedy that was so zesty and objective that it could be suppressed today. The Romans on the other hand, used and favored satire; the use of satire was by far an intelligent way of poking fun at the present tribulations and public figures.
Therefore, looking at ancient Greece, Greco Rome and medieval Europe; one sees a strong relationship between the three civilizations. The correlation between these civilizations can be attributed to Greece which was by far more civilized than Rome. Even so, after the fall of Greece, Rome ensured the survival of some of its cultural practices by adopting them. For instance, the Romans preserved the Greeks style of art by applying their ideas to create their own artistic expressions. In the same context, medieval Europe also ensured the survival of the Roman art by preserving it, after the fall of the Roman Empire.
Work Cited
Barlett, Brace. “How Excessive Government Killed Ancient Rome.” The Cato 14 (1994): 15-18. Print.
Canter, Harrison. “Conflagrations in Ancient Rome.” The Classical 27 (2010): 270-288. Print.
Hill, Rosemary. “Early Medieval Survivors.” The Guardian 9 September 2011. Print. Read More
Share:
Tags
Cite this document
(“Relationship between the three civilizations: ancient Greece, Greco Essay”, n.d.)
Relationship between the three civilizations: ancient Greece, Greco Essay. Retrieved from https://studentshare.org/history/1586771-relationship-between-the-three-civilizations-ancient-greece-greco-rome-and-medieval-europe

CHECK THESE SAMPLES OF Relationship between the three civilizations: ancient Greece, Greco Rome and medieval Europe

...of Greece can attain an answer this way then he or she can attempt to learn from it and change the situation next time. It enables a sense of control to the Greeks as well as an understanding of the world they live in and their afterlife. Hesiod went into detail about many of the most vital interactions and relationships between the gods. Prometheus is a prime example of a key circumstance that occurred between man and Zeus. Prometheus was ordered to construct man out of clay by Zeus, but Prometheus took it too far by giving man the best part of the feast of the gods as well as the most critical element: fire. The Greeks understood this to be the reason why they are...
5 Pages(1250 words)Essay

...the world’s first steam engine. The steam engine, in its developed modern form, was one of the most milestone inventions for modern western civilization as it provided a complete turn of mechanism from the ancient days of doing everything by hand. It created a clear divide between the age of man and the age of machines, with modern civilization developing rapidly and dramatically after its invention. Indeed many of our inventions today can trace its route back to the steam engine, or can at least accredit it to being the inspiration behind them. The principal behind jet propulsion is indeed the exact principle behind the ancient Greek version of...
4 Pages(1000 words)Essay

The Relationship between the Renaissance and the Greco-Roman World

...?World Literature The Relationship between the Renaissance and the Greco-Roman World. As the term suggests, the Renaissance is a label which emphasizes the rebirth of ideas which has largely been lost, and it certainly true that in Northern and Western Europe the period we now call the Renaissance did reach back to the art, literature and ideas of the Greco Roman world. It would be quite incorrect, however, to define this period only in terms of what it imitated from that period. The Renaissance is characterized by two main features: the development of elements from the classical past of Greece and Rome, and an emerging...
3 Pages(750 words)Essay

Ancient Greece and Rome on film

...? ANCIENT GREECE AND ROME ON FILM By Lecturer: of Affiliation: and Ancient Greece and Rome on Film Question 4: Pagans and Christians Introduction Quo Vadis is an American epic film of 1951 that was directed by Mervyn LeRoy and it was adapted from a classic 1896 Quo Vadis novel. The action of this epic film took place back in the ancient Rome starting from 64 to 68 AD (LeRoy, 2008). This was the period when Claudius emperor was in power and this was the period when there was corruption and destructive emperor Nero ascended into power. Nero eventually threatened to destroy the peaceful order of the...
10 Pages(2500 words)Essay

...to defend from other people who may be after what they have (Diamond 496-499). This is why the ancient civilizations developed in fertile lands close to rivers and seas, because sailing was the common form of transportation across long distances and when a group of people decides to go on their own, they travel by sea or rivers and set up their own social unit where they end up. This is the case with the two civilizations that would be discussed next, that of Greece and Rome. Rise and Fall of Two Civilizations: Greece and Rome What became Greek civilization had its foundation in the...
5 Pages(1250 words)Essay

Tourism and Hospitality in London: Strategy and Action Plan

...Most of modern-day civilizations here on earth are perhaps influenced by primitive Rome. This ancient civilization really has its traces of influencein economy, form of government, religion, beliefs and arts. People, works, way of thinking and the likes from this civilization were felt and are still creating an impact on most of the people and places at present. Religion plays a big role in terms of Rome's contribution to the world. Roman Catholicism perhaps is the most and widely embraced religion on earth. During the time of the Roman Empire, one of the most influential and strongest empires that were established, the Pauline Christianity or the Christianity that was propagated and preached by Apostle Paul influenced it. Since... then,...
2 Pages(500 words)Essay

...Ancient Greece Q 2 Might Oedipus be more than one man? This question asks you to consider the plays central inconsistency as potentially one of its themes. The Thebans have heard that Laius was killed by more than one man; in fact, Oedipus alone committed the murder. Think of Oedipus various roles in the play - king/brother/father/son - and consider whether the conflict of the play might be a conflict between the one and the many. In the Greed tragedy Oedipus, written by Sophocles, the main protagonist King Oedipus is beset by a plagued Thebes, a condition which can only be reversed by the prosecution of an unknown criminal who took the life of its previous king. The unraveling of the unknown criminal’s identity forms the crux... a group...
4 Pages(1000 words)Essay

Art of Medieval Europe and Rome

...Research Paper I. Thesis. Both Medieval Europe and Rome had similar expressions of what. But it was Medieval Europe that adapted art from ancient Rome. II. Art A. Visual 1. Architecture 2. Painting B. Anglo Saxon 1. Early Christian art 2. Byzantine art III. gods A. Latin for the roman 1. Jupiter 2. Juno B. Greek for the Greek 1. Zues 2. Hera IV. Warriors A. Mongols 1.dao 2.saber B. Knight 1. Armor 2. War horse Unlike the visual ancient Roman art, medieval art emerged from the artist legacy of the Roman Empire, and partly from some Christian traditions of...
2 Pages(500 words)Essay
sponsored ads
Save Your Time for More Important Things
Let us write or edit the essay on your topic "Relationship between the three civilizations: ancient Greece, Greco Rome and medieval Europe" with a personal 20% discount.
GRAB THE BEST PAPER

Let us find you another Essay on topic Relationship between the three civilizations: ancient Greece, Greco Rome and medieval Europe for FREE!