Comments (0)
Add to wishlistDelete from wishlist
Cite this document
Summary
Unlike the visual ancient Roman art, medieval art emerged from the artist legacy of the Roman Empire, and partly from some Christian traditions of the early church. Ideally, these were interspersed with the dynamic barbarian artistic culture of northern Europe to make exceptional artistic heritage…
Download full paperFile format: .doc, available for editing
HIDE THIS PAPERGRAB THE BEST PAPER97.1% of users find it useful 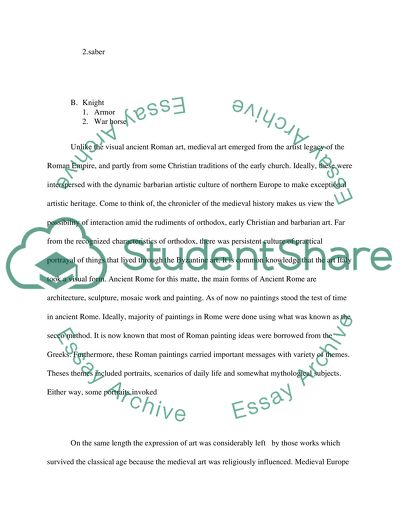 Extract of sample "Art of Medieval Europe and Rome"

Research Paper I. Thesis. Both Medieval Europe and Rome had similar expressions of what. But it was Medieval Europe that adapted art from ancient Rome.
II. Art
A. Visual
1. Architecture
2. Painting
B. Anglo Saxon
1. Early Christian art
2. Byzantine art
III. gods
A. Latin for the roman
1. Jupiter
2. Juno
B. Greek for the Greek
1. Zues
2. Hera
IV. Warriors
A. Mongols
1.dao
2.saber
B. Knight
1. Armor
2. War horse
Unlike the visual ancient Roman art, medieval art emerged from the artist legacy of the Roman Empire, and partly from some Christian traditions of the early church. Ideally, these were interspersed with the dynamic barbarian artistic culture of northern Europe to make exceptional artistic heritage. Come to think of, the chronicler of the medieval history makes us view the possibility of interaction amid the rudiments of orthodox, early Christian and barbarian art. Far from the recognized characteristics of orthodox, there was persistent culture of practical portrayal of things that lived through the Byzantine art. It is common knowledge that the art Italy took a visual form. Ancient Rome for this matte, the main forms of Ancient Rome are architecture, sculpture, mosaic work and painting. As of now no paintings stood the test of time in ancient Rome. Ideally, majority of paintings in Rome were done using what was known as the secco method. It is now known that most of Roman painting ideas were borrowed from the Greeks. Furthermore, these Roman paintings carried important messages with variety of themes. Theses themes included portraits, scenarios of daily life and somewhat mythological subjects. Either way, some portraits invoked
On the same length the expression of art was considerably left by those works which survived the classical age because the medieval art was religiously influenced. Medieval Europe adapted a lot of things from the Romans. These include art and architecture and theatre The Romans were endowed with building comparatively superior roads that were well connected to each other. This was a style that was well adapted across Europe. The architecture behind the construction of Monarchs such like the Charlemagne can be rooted back to the Greco-Roman period.
The architecture of medieval Europe should be associated with genius. Matter of factly, people of medieval Europe and the Romans were exceptional builders. Their architecture was both tremendous and restrained. The Romans and the people of medieval Europe constructed superior and better building than any community in the classical era could not rival. Tourist by the suck load today still give special and pure regard to the ruins in Athens and Rome. The buildings that were constructed at this ancient and medieval time have lasted and passed the test of time. It ought to be noted that these buildings still possess the intricate talent of the builders’ skill to date. In Medieval Europe around 1000-1300 A.D., however, the architectures and builders adapted the ancient Roman art and architecture, which they used in building historical landmarks.
When it comes to religion, the Romans adopted they ideas of the religion from the Greeks. However, the gods only varied in terms of names. For one thing, the Roman gods and goddesses had Latin names for the Roman, while the Greeks gods had Greek names.
Medieval Europe knights and the ancient Chinese Mongols were high skilled warriors. Both warriors used highly special weapons during battles. The knights used the armor which was designed as counteract against sword and the shield. Either way, the Chinese Mongols used a special type sword called doa and saber. This therefore means that these two warriors used almost similar tactics and methods in fighting their enemies in the ancient wars. To cap it all, we the aforementioned civilizations have comparative aspects in one way or another.
Work Cited
Joax, Bienvenido. “Medieval Life.” Medieval Times and Castles 28 Nov 2011 . Read More
Share:
Tags
Cite this document
(“Art of Medieval Europe and Rome Essay Example | Topics and Well Written Essays - 500 words”, n.d.)
Retrieved from https://studentshare.org/history/1585995-art-of-medieval-europe-and-rome

CHECK THESE SAMPLES OF Art of Medieval Europe and Rome

Religion in the Medieval Europe

...s: Details: Due Religion in the medieval Europe Medieval European conceptualised magic and witchcraft in different manners depending on affiliation of beliefs and practices. Greco-roman paganism and magic intersected with Christianity, which interpreted magic as necromancy. The Arabic community introduced the astrology in the 12th century who practiced magic in the medieval culture. These were practiced in various ways including, divination that comprised of astrology, palm reading, interpretation of dream and reading of omens. Medical magic was also part of magical practice. It involved the use of charms, medical astrology, prayers and use of medical herbs. Other forms...
7 Pages(1750 words)Essay

...The status of Deaf people, socially and politically during Medieval Europe, was quite complicated. Deaf people have existed for as long as there have been human beings. The first mentioned about deaf people is in 575-550 BC: Deaf son (name unknown) of Croesus, king of Lydia; first recorded deaf person in history. Croesus' other son, Athys, was hearing and had his name preserved for posterity, these names were mentioned in Book I of Herodotus' History, and in the Cyropaedia by Xenophon. But this work is about the role of deaf people in Medieval Europe: Jaime Lopez was a Spanish deaf painter; Princess Jean (also known as Joanna) was a daughter of King James I of Scotland and Queen Jane Beaufort; Teresa de Cartagena, a deaf nun... weakness and...
6 Pages(1500 words)Essay

...of the international trade all over catholic Europe. 'The survival of long-distance trade boosted the production of goods for market exchange in the medieval period"16 What is more important, is that religion has grounded the roots of property relations, and the respect towards private property has become the result not only of religious allegiance, but also of this normative pacification. Catholic religion has also contributed into people striving for social and moral improvement, which has resulted in faster economic development, as social and moral improvement was implied by better financial state of the person and the society as a whole.17 'religion played an important role in the process of...
8 Pages(2000 words)Essay

...143712 Popular revolts in late medieval Europe were mainly by the peasants and bourgeois and it was always against the Kings, Nobles, Church and Abbots. They were also known as Peasant Revolts, though not restricted to only the peasants. They were popular revolts, with unspeakable cruelty towards the noble class. Till then, most of the European revolts were minor in nature and had no large significance. These revolts had mass support and participation, to the extent that ordinary, God fearing common people had the courage and ruthlessness of staging a revolt of that stupendous a nature, even though they were not of the same scale like Russian or French Revolution. "A revolution is something planned and...
6 Pages(1500 words)Essay

...Women in Medieval Europe Medieval Europe childlike time the commonly found personalities of that time s are feudal kings, saintly nuns and hardworking surfs they are not modern today people take medieval women as hopelessly oppressed or wonderfully free. Middle age is important because when feminist's movement started in nineteenth century they went back to Middle Ages for information regarding education, status under law and participation in political life. In the man's world of the Middle Ages women were remarkably successful. The medieval church taught that women were inferior to men and that they should be meek and obedient to their...
3 Pages(750 words)Essay

...Thesis: Both Medieval Europe and Rome had similar expressions of art. But it was Medieval Europe that adapted art from ancient Rome, which on the other hand, borrowed art from the Greeks. Name Instructor Course Date Rough Draft The Greeks were purely democratic; they had no single leader but instead ruled by the oligarchy that was elected by the common man. Conversely, the Roman government system was primed on semi-democracy. They had a ruling senate, which comprised of wealthy magnates. Moreover, the political power of the Romans was wholly in the hands of a solitary...
1 Pages(250 words)Essay

... Ancient and medieval art Reserve Head of Nofer, Giza tomb G 2110A, Dynasty 4, 2602-2575 BCE, 10 11/16” high (Second floor, Old Kingdom Egyptian gallery off rotunda, look for one of the white heads in a glass case 06.1886; Map: orange, gallery 207. It is difficult to know exactly how Nofer looked like but from the reserve head found in tomb at Giza, it can be argued that Nofer had large aquiline nose. This element is featured on the door-jump of his chapel and on the reserve head found at the base of his burial pit or tomb. From the reserve head, Nofer is presented as a huge and big person who did not belong to the royal family but played a significant role in the fourth dynasty in Egypt. For example, he was given titles... such as...
5 Pages(1250 words)Essay

...that this book falls amongst other key adorable books of the medieval periods. The skill as well as expertise with which the colors were matched is of highest standards4. This is depicted in the image below. Image 3: Adorable and attractive decorations found in the Book of Kells This has made the Book of Kells emerge as one of the most interesting books in the world history. Other than the red and purple colors, the artists also used yellow color in coming up with decorations as well as texts within the Book of Kells. This has made the book become one of the literature delicacies in the medieval periods. As such, it is of critical importance to acknowledge the fact that the Book of Kells is extraordinary...
7 Pages(1750 words)Essay

...Rome: Art and Architecture The Colosseum, 70 CE The Colosseum is a ical architecture building. The building (also known as Flavian Amphitheatre) was constructed between 70-80 AD. Rather than being accredited with an architect, the construction of the Colosseum is accredited a number of emperors, amongst them Emperors Vespasian and Titus. The former initiated the construction of the Colosseum while the latter, who was the immediate heir, saw its completion. Over the next decades that followed the initial construction, Emperor Domitian saw the inclusion of other modifications (Kleiner 132). It is because of the family name of the three emperors who saw the construction that this classical building was...
19 Pages(4750 words)Research Paper
sponsored ads
Save Your Time for More Important Things
Let us write or edit the essay on your topic "Art of Medieval Europe and Rome" with a personal 20% discount.
GRAB THE BEST PAPER

Let us find you another Essay on topic Art of Medieval Europe and Rome for FREE!