Comments (0)
Add to wishlistDelete from wishlist
Cite this document
Summary
The Greeks were purely democratic; they had no single leader but instead ruled by the oligarchy that was elected by the common man. Conversely, the Roman government system was primed on semi-democracy…
Download full paperFile format: .doc, available for editing
HIDE THIS PAPERGRAB THE BEST PAPER98.5% of users find it useful 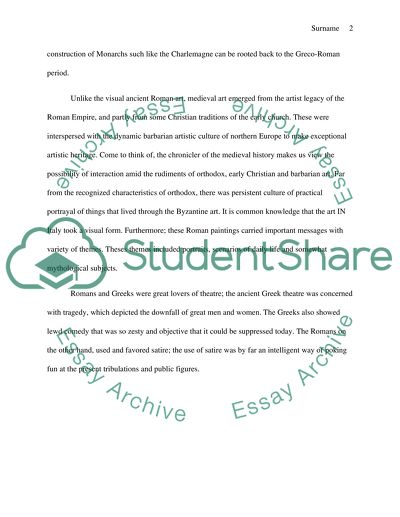 Thesis: Both Medieval Europe and Rome had similar expressions of art. But it was Medieval Europe that adapted art from ancient Rome, which on the other hand, borrowed art from the Greeks.
Name
Instructor
Course
Date
Rough Draft
The Greeks were purely democratic; they had no single leader but instead ruled by the oligarchy that was elected by the common man. Conversely, the Roman government system was primed on semi-democracy. They had a ruling senate, which comprised of wealthy magnates. Moreover, the political power of the Romans was wholly in the hands of a solitary monarch.
The ruins of the primordial world like Ephesus, Pergamum, Pompeii and Volubilus attest to the fact that the Greeks and Romans were exceptional builders. Tourist by the suck load today still give special and pure regard to the ruins in Athens and Rome. The buildings that were constructed at this ancient and medieval time have lasted and passed the test of time. It ought to be noted that these buildings still possess the intricate talent of the builders’ skill to date. In Medieval Europe around 1000-1300 A.D., however, the architectures and builders adapted the ancient Roman art and architecture, which they used in building historical landmarks The architecture of medieval Europe should be associated with genius. Matter of factly, people of medieval Europe and the Romans were exceptional builders. Their architecture was both tremendous and restrained.
On the same length, the expression of art was considerably left by those works which survived the classical age because the medieval art was religiously influenced. Medieval Europe adapted a lot of things from the Romans. These include art and architecture and theatre The Romans were endowed with building comparatively superior roads that were well connected to each other. This was a style that was well adapted across Europe. The architecture behind the construction of Monarchs such like the Charlemagne can be rooted back to the Greco-Roman period.
Unlike the visual ancient Roman art, medieval art emerged from the artist legacy of the Roman Empire, and partly from some Christian traditions of the early church. These were interspersed with the dynamic barbarian artistic culture of northern Europe to make exceptional artistic heritage. Come to think of, the chronicler of the medieval history makes us view the possibility of interaction amid the rudiments of orthodox, early Christian and barbarian art. Far from the recognized characteristics of orthodox, there was persistent culture of practical portrayal of things that lived through the Byzantine art. It is common knowledge that the art IN Italy took a visual form. Furthermore; these Roman paintings carried important messages with variety of themes. Theses themes included portraits, scenarios of daily life and somewhat mythological subjects.
Romans and Greeks were great lovers of theatre; the ancient Greek theatre was concerned with tragedy, which depicted the downfall of great men and women. The Greeks also showed lewd comedy that was so zesty and objective that it could be suppressed today. The Romans on the other hand, used and favored satire; the use of satire was by far an intelligent way of poking fun at the present tribulations and public figures.

CHECK THESE SAMPLES OF Ancient Rome and Greek art

...a society all their own outside of Greek culture? Ancient Greece and Rome had many things in common. They were both civilizations that placed a high value on the worth of ideas and the arts, though they used these ideas in very different ways. Greek and Roman art and architecture continues to inspire the world to this day. The classical Doric columns of the Parthenon and the majesty of the Coliseum are instantly recognizable by millions of people all over the world. The ideals of beauty, symmetry, balance and proportion that were developed by the Greeks were done so that the world might look upon a particular city-state...
6 Pages(1500 words)Essay

...?Daily life in ancient Rome A brief summary of the books content. In the ic book “Daily Life in Ancient Rome” published in 1939, Jerome Carcopino depicts the Roman culture and daily life routines during the reigns of Trajan (98-117), Hadrian (117-138), Marcus Aurelius, and Commodus.  The Roman social life and culture were at the apex in power and prosperity in this period. Jerome Carcopino has smoothly organized 1st and 2nd Century Rome back into picture in his book. Carcopino recreated the magnificence and immorality of the city; it’s dark, narrow crowded streets and daily routines from the vast collection of archaeological evidence and from vivid...
5 Pages(1250 words)Book Report/Review

...?The of slavery in Rome was started by Romulus, the legendary founder of the Rome when he allowed the heads of Roman families to sell their children into slavery. The institution of slavery continued to grow as the Roman state expanded and this went on until it became one of the core institutions in the state, with the latter having a large dependency on it. In ancient Rome, slavery played a very important role in both the society and the economy because besides manual labor, slaves were tasked to do many other domestic services and some were even employed in very skilled jobs and professions. It should be noted that in ancient Rome,...
5 Pages(1250 words)Research Paper

...of the ancient Romans. The clothing of the poor used to be from coarse dark types while the clothing of the rich used to be from white wool or linen. Ancient Romans had a simple intake of food such as nuts, salads, breads and other such types. The roman literature had been greatly influenced from the Greeks. The literary works of ancient Roman mainly consist of history of Rome (Adkins and Adkins, 374). Dome of Florence (Source: http://www.italian-renaissance-art.com/image-files/brunelleschi-dome-florence.jpg) Filippo Brunelleschi was one of the young architects of Ancient Rome. Brunelleschi was highly interested in the...
3 Pages(750 words)Research Paper

...Ancient Greek Ceramics Between 2700-1450 BC The Minoan civilization flourished on Crete and at sites on the other Greek islands and the mainland. A typical example of Minoan pottery is an amphora originally found in the place at Knossos on Crete and now in the Museum of Antiquities at the University of Saskatchewan, dating from about 1450 (
5 Pages(1250 words)Essay

...Most of modern-day civilizations here on earth are perhaps influenced by primitive Rome. This ancient civilization really has its traces of influencein economy, form of government, religion, beliefs and arts. People, works, way of thinking and the likes from this civilization were felt and are still creating an impact on most of the people and places at present. Religion plays a big role in terms of Rome's contribution to the world. Roman Catholicism perhaps is the most and widely embraced religion on earth. During the time of the Roman Empire, one of the most influential and strongest empires that were established, the Pauline Christianity or the Christianity that was propagated and preached by Apostle Paul influenced it. Since... in...
2 Pages(500 words)Essay

...﻿Egypt Rome and ancient China Egypt, Rome and ancient China were among the first civilizations originating between 3500 and 3000 B.C. Despite this similarity, their geographical locations differ in that the Mesopotamia is located between Euphrates and Tigris while Egypt lies within the Nile Valley. The two regions have much in common. For instance, in Mesopotamia and Egypt, a theme of religion was common in their daily lives in that they shared a common trust and belief in the Supreme Being (Leakey 23). Egyptian civilization In Egypt, people build up settlements along riverbanks. The main activity of inhabitants of this area was agriculture, which depended on seed...
2 Pages(500 words)Essay

Analysis of Art Objects from Ancient Egypt and Ancient Rome

...﻿Analysis of Art Objects from Ancient Egypt and Ancient Rome Outline Introduction Description of ancient art as a form of preserving culture. Then the paper introduces the two topics that will be discussed in the paper, i.e. art objects from ancient Rome and ancient Egypt. The paper looks into the Roman culture and belief in the afterlife through studying the Colosseum; the paper then explores the Great Pyramid of Khufu to uncover ancient Egyptian belief in eternal life after death. Discussion This part introduces the two art objects- the...
5 Pages(1250 words)Essay

...of a waterfowl. The major question is, “What is he really singing?” The assumption is that these are individuals who sang the epic tales of heroes, gods and goddess such as those recorded in Homer’s Iliad and Odyssey (van, Schaik, 41). Additionally, the painted eyes are a clear indication of the blind singer Demodokos highlighted in the Odyssey. In conclusion, it is evident that the male figure sits on a high-backed chair playing a stringed instrument (van, Schaik, 18). This is good representation of earliest representation of musician differentiated by the responsive representation of the arms and hands. Work Cited Van, Schaik M. "Ancient Marble Harp Figurines: the Search for a Stratified Context." Music in...
2 Pages(500 words)Essay
sponsored ads
Save Your Time for More Important Things
Let us write or edit the essay on your topic "Ancient Rome and Greek art" with a personal 20% discount.
GRAB THE BEST PAPER

Let us find you another Essay on topic Ancient Rome and Greek art for FREE!