The Future of The United Nations - Essay Example

Comments (0)
Add to wishlistDelete from wishlist
Cite this document
Summary
The United Nations (UN) is an international organization which aims to facilitate law, economic welfare, equivalent human rights and international security within member states, with the ultimate objective of achieving peace throughout the world.
A question which many people…
Download full paperFile format: .doc, available for editing
HIDE THIS PAPERGRAB THE BEST PAPER92.4% of users find it useful 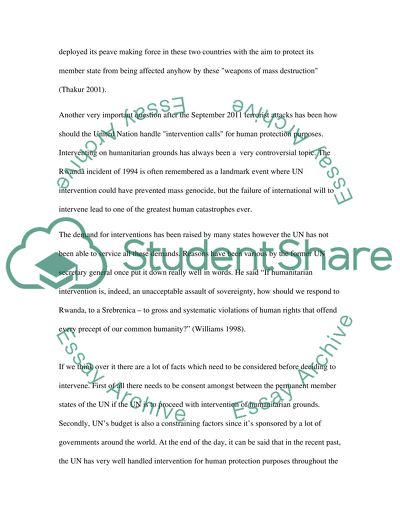 Extract of sample "The Future of The United Nations"

The Future Of United Nations By [Your College The United Nations (UN) is an international organization which aims to facilitate law, economic welfare, equivalent human rights and international security within member states, with the ultimate objective of achieving peace throughout the world.
A question which many people raise when it comes to UN is if the organisation removes individual sovereignity and, if it does, then does it even have the powers to do that. To consider this issue we first need to figure out what the word sovereignity actually means. Sovereignity is generally defined as "Responbibility. The primary responsibility for a state is to provide protection to people within the state itself" (International Commission On Intervention And State Sovereignty 2001).
Sovereignty is more then just an emblem or measure of international relations between countries. The UN does not remove sovereignty of member countries, however it takes steps to make sure the overall the UN member countries stay sovereign. It does that by assisting countries whenever an event comes up which somehow or the other effects their sovereignty (International Commission On Intervention And State Sovereignty 2001).
Just to quote a recent example, Iraq and Afghanistan were proving a threat to the international community at large. Media reports claimed that the two countries possessed weapons of mass destruction and their rulers were tyrants, wanting to cause harm to their country men by taking innocent lives. The UN taking notice of the security concern, deployed its peave making force in these two countries with the aim to protect its member state from being affected anyhow by these "weapons of mass destruction" (Thakur 2001).
Another very important question after the September 2011 terrorist attacks has been how should the United Nation handle "intervention calls" for human protection purposes. Interventing on humanitarian grounds has always been a very controversial topic. The Rwanda incident of 1994 is often remembered as a landmark event where UN intervention could have prevented mass genocide, but the failure of international will to intervene lead to one of the greatest human catastrophes ever.
The demand for interventions has been raised by many states however the UN has not been able to service all these demands. Reasons have been various by the former UN secretary general once put it down really well in words. He said “If humanitarian intervention is, indeed, an unacceptable assault of sovereignty, how should we respond to Rwanda, to a Srebrenica – to gross and systematic violations of human rights that offend every precept of our common humanity?” (Williams 1998).
If we think over it there are a lot of facts which need to be considered before deciding to intervene. First of all there needs to be consent amongst between the permanent member states of the UN if the UN is to proceed with intervention of humanitarian grounds. Secondly, UN’s budget is also a constraining factors since it’s sponsored by a lot of governments around the world. At the end of the day, it can be said that in the recent past, the UN has very well handled intervention for human protection purposes throughout the world. I give my view on the recent involvement of the UN peace keeping force in Kosovo, Iraq and Afghanistan (Williamson 1998).
UN’s intervention in Kosovo and Bosnia bought the dilemma of intervention for human purposes to an all time high. The Kosovo intervention was considered very controversial as it raised daunting questions about the genuineness of the case for military intervention in the country. People often say that the offences committed by the Belgrade authorities weren’t sufficiently serious to demand foreign intervention in the face of UN and NATO. Other believe that had the NATO not intervened in the operations of the country, Kosovo would have been in a much better state.
The Bosnian dilemma also depicted a very bad image of the UN throughout the world. The case demanded serious intervention which could have prevented a massacred of thousands of people, but failure by the UN to interfere left thousands dead and scores injured (Gorman 2001).
References
INTERNATIONAL COMMISSION ON INTERVENTION AND STATE SOVEREIGNTY, EVANS, G. J., & SAHNOUN, M. (2001). The responsibility to protect report of the International Commission on Intervention and State Sovereignty. Ottawa, International Development Research Centre. http://site.ebrary.com/id/10119691.
GORMAN, R. F. (2001). Great debates at the United Nations: an encyclopedia of fifty key issues 1945-2000. Westport, Conn, Greenwood Press.
THAKUR, R. C., & SCHNABEL, A. (2001). United Nations peacekeeping operations: ad hoc missions, permanent engagement. Tokyo, United Nations University Press.
WILLIAMS, M. C. (1998). Civil-military relations and peacekeeping. Oxford, Oxford University Press for the International Institute for Strategic Studies.
WILLIAMSON, R. (1998). Some corner of a foreign field: intervention and world order. Houndmills, Basingstoke, Hampshire, Macmillan Press.
Bottom of Form
Bottom of Form Read More
Share:
Tags
Cite this document
(“The Future of The United Nations Essay Example | Topics and Well Written Essays - 500 words”, n.d.)
The Future of The United Nations Essay Example | Topics and Well Written Essays - 500 words. Retrieved from https://studentshare.org/history/1586589-the-future-of-the-united-nations

“The Future of The United Nations Essay Example | Topics and Well Written Essays - 500 Words”, n.d. https://studentshare.org/history/1586589-the-future-of-the-united-nations.
Comments (0)
Click to create a comment or rate a document

CHECK THESE SAMPLES OF The Future of The United Nations

...?Effectiveness of United Nations Established on 26 June 1945 in the aftermath of World War II, United Nations is now an organization with sixty five years of existence on the globe. Beside social, economic, and humanitarian issues, the chief motivation and rationale behind its foundation was to achieve the global peace and stability. Therefore, human progress and prosperity along with peace and security can be safely declared as the measuring yard for the effectiveness of the United Nation. This is what the United Nations charter talks about, “to save succeeding generations from the scourge of war, which...
4 Pages(1000 words)Essay

...International Law After the end of the World war one, the League of Nations was formed by the great and victorious powers who participated in the war. The goal was simple, not to allow another war in the future. Due to the failure of the Versailles treaty, all were looking for another organization which could bring stability to the world. The organization had success in solving conflicts between different countries namely The Aaland island issue between Sweden and Finland, Upper Silesia problem between Germany and Poland, The Memel problem of 1923 in Lithuania, humanitarian crisis in Turkey, conflict Between Greece and Bulgaria etc. however the organization faced failures also they were the crisis in...
4 Pages(1000 words)Essay

...The United Nations The year 1991. The strategic war between the two superpowers, the United s and the Soviet Union had ceased. This is becauseof the collapse of Soviet Communism in the USSR itself. Now that the Cold War is all but over, the role of the United Nations as world arbiter had considerably diminished, for the conflict between two great nations had ceased. However, UN peacekeeping had not ceased, because turmoil and conflicts still mar the international community, therefore, the need for them, for ceasefires are not permanent. As a general policy upheld until now, they were only fielded in peacekeeping zones after a ceasefire...
2 Pages(500 words)Essay

...THE UNITED NATIONS The United Nations (UN) is a supranational collective body composed of constituent member s. Democracy, negotiation, and collective decision-making through multilateralism are all inherent attributes of the modern UN. As a multinational organization, the United Nations represents various national interests within an overarching political framework and facilitates intercultural communication on a global scale. The UN is a multilateral organization which operates on the basis of negotiation between member states and relies on collective decision-making to achieve its ends. Members are joined together...
5 Pages(1250 words)Essay

...UN The United Nations came out of the failed League of Nations in the 20th century, and since then, although it has changed in scope, duties, and membership, it has remained a vital and fundamentally effective international organization. The United Nations was originally set up as a charter for nations in war to keep their alliances. Problems arose from this situation because previous organizations like the League of Nations had not succeeded, so it was important to create a body that was not similarly flawed. Earlier organizations had also failed because they showed themselves to be the victors dividing the spoils...
2 Pages(500 words)Essay

...by the judges (United Nations 2010). Trusteeship Council The Trusteeship council had a total 11 trust territories which were to be judged by seven member states. Its primary aim was to prepare the territories for independence and self governance in the future. The 11 territories have successfully attained independence and the procedure and rules are still there to follow for any future incident (United Nations 2010). Secretariat The secretariat is the everyday office of the United Nations. It follows a protocol to analyze the processes that other bodies of the UN have implemented. In other words it...
8 Pages(2000 words)Essay

...The United Nations The United Nations (UN) was formed immediately after the Second World War with the aim of preventing another such incidence. Therefore, its main aim was and still is to maintain worldwide peace by ensuring friendly coexistence between nations. On its formation it had 51 members but as the years advanced the members increased and it now has 193 members. Other UN functions include environmental protection, enforcing human rights, social and economic development among others. These functions are specialized to the various UN organs that include the Economic and Social Council (ECOSOC), the General Assembly, the Security Council, the...
2 Pages(500 words)Essay

...United Nations Overview United Nations is a well organized organization, which operates in many countries of the world. Due to the fame and popularity of the organization, I had thoughts about its organization, operation, membership objectives and roles. After carrying out research about the UN, I came to realize that my thoughts were true. UN is an organization regarded as an intergovernmental organization. It was created in 1945 with an aim of promoting international co-operations. It was organized in the Second World War with an aim of preventing world conflict from taking place. The organization’s headquarter is located at Manhattan, New York with main offices in...
2 Pages(500 words)Essay
sponsored ads
Save Your Time for More Important Things
Let us write or edit the essay on your topic "The Future of The United Nations" with a personal 20% discount.
GRAB THE BEST PAPER

Let us find you another Essay on topic The Future of The United Nations for FREE!