Comments (0)
Add to wishlistDelete from wishlist
Cite this document
Summary
This case of Mr. Miller accurately demonstrates the case of a patient who has learned to take on a more active and engaged role in his own care. Being engaged in one’s care is an important part of the recovery process because it can help ensure long-term recovery (Longtin, et.al., 2010). …
Download full paperFile format: .doc, available for editing
HIDE THIS PAPERGRAB THE BEST PAPER97.1% of users find it useful 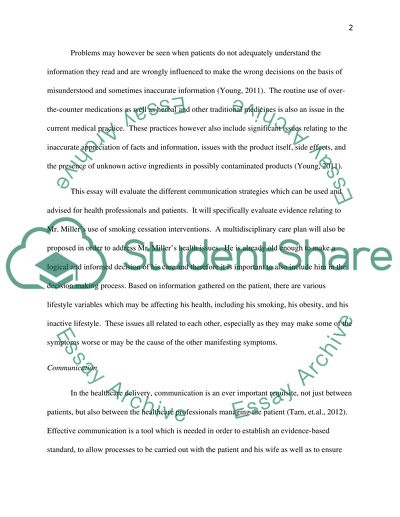 Download file to see previous pages In the current age of computers and the internet, patients can easily be informed about their diseases, their symptoms, their prognoses, including their treatment options (Longtin, et.al., 2010).
Problems may however be seen when patients do not adequately understand the information they read and are wrongly influenced to make the wrong decisions on the basis of misunderstood and sometimes inaccurate information (Young, 2011). The routine use of over-the-counter medications as well as herbal and other traditional medicines is also an issue in the current medical practice. These practices however also include significant issues relating to the inaccurate appreciation of facts and information, issues with the product itself, side effects, and the presence of unknown active ingredients in possibly contaminated products (Young, 2011).
This essay will evaluate the different communication strategies which can be used and advised for health professionals and patients. It will specifically evaluate evidence relating to Mr. Miller’s use of smoking cessation interventions. A multidisciplinary care plan will also be proposed in order to address Mr. Miller’s health issues. He is already old enough to make a logical and informed decision of his care and therefore it is important to also include him in the decision making process. Based on information gathered on the patient, there are various lifestyle variables which may be affecting his health, including his smoking, his obesity, and his inactive lifestyle. These issues all related to each other, especially as they may make some of the symptoms worse or may be the cause of the other manifesting symptoms. Communication In the healthcare delivery, communication is an ever important requisite, not just between patients, but also between the healthcare professionals managing the patient (Tarn, et.al., 2012). Effective communication is a tool which is needed in order to establish an evidence-based standard, to allow processes to be carried out with the patient and his wife as well as to ensure that informed choices are made on his care (Tarn, et.al., 2012). Communication skills include the establishment of patient rapport, clear and coherent communication, empathy, responsiveness to the patient’s needs as well as his emotions during admission, as well as correctly interpreting non-verbal cues (Tarn, et.al., 2012). The different communication strategies have been presented, relating to specific elements in the decision-making process. These elements include clearly communicating evidence-based data from the health professional to the patient, accurate patient ...Download file to see next pagesRead More
Share:
Tags
Cite this document
(“Evidence-based Practice.Clinical Scenario Essay”, n.d.)
Retrieved from https://studentshare.org/health-sciences-medicine/1404560-evidence-based-practice

Proves are very crucial to many investigations, especially when attempting to reach a logical conclusion of whether or not the investigated shooting was done in self-defence, suicide, or in fact a homicide. Again, all the most up to date studies are also included in this researched literature being presented. The conclusion is in showing just how valuable of an asset these specific tests really are towards the outcome of numerous investigations from the past and in the present.
The materials that are found to make up gun powder residue and seemingly found to predominantly consist of a mixture including organic and non-organic substances are basically elemental metals, among other items. However, it has been determined by a nu...
11 Pages(2750 words)Coursework

This is also the position Stone (2007) takes in the quote under discussion.
Furthermore, Stone goes on to declare that Australia has been very slow to implement this practice as compared with other countries and government agencies. One of the primary reasons is that the public policy system in Australia is quite complex and the decision-makers have not come into agreement on where to place it in the policy matrix. This leaves Interprofessional Practice and Education in the dark (or the cold) as far as strategic planning for implementation as well as placing itself within the funding cycles of the government disbursements. (Stone, 2007)
Policies are created in order to put in place how politicians and government official...
6 Pages(1500 words)Assignment
sponsored ads
Save Your Time for More Important Things
Let us write or edit the essay on your topic "Evidence-based Practice.Clinical Scenario" with a personal 20% discount.
GRAB THE BEST PAPER

Let us find you another Essay on topic Evidence-based Practice.Clinical Scenario for FREE!